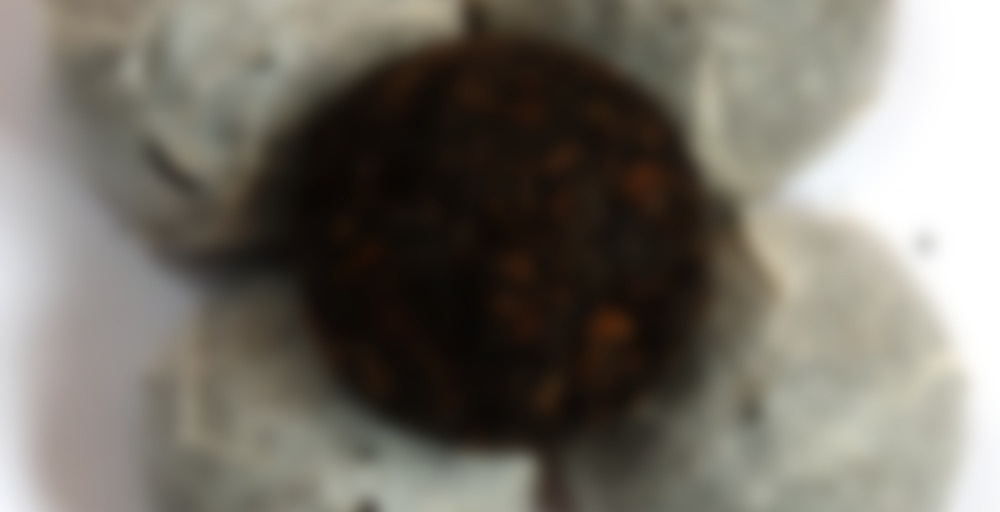 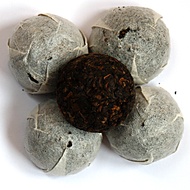 The Pu Erh leaves are pressed into small individually wrapped bowls called toucha each making a cup of Pu Erh tea. Pu Erh can be stored and left to mature over long periods of time. These Toucha are perfect for travelling or days away, a more convenient way of enjoying the health benefits of this unique tea.

From my Nothing But Tea Pu Erh sampler that I bought myself for Christmas. I popped two of the little cakes into my gongfu and steeped with boiling water starting with 1 minute and increasing it by the same for each steep.

The toucha’s had a slight earthy fragrance whilst raw. Once rinsed the Pu Erh has broken down into small finely chopped parts that resemble grounded coffee that has an earthy, strong and sweet almost leafy autumn smell. I have never had such finely cut Pu Erh before.

As for the taste it’s very earthy and astringent with thick richness and depth. It’s also a little fishy in honesty. The quality seems to be standard, it’s just your bog standard Pu Erh to be drank everyday. In other words it’s cheap and cheerful.

Never had a pu-erh toucha before. At first I wasn’t sure if I should steep it as it was or if I should break it to bits first, but I decided to go for the former after having looked it up at the seller’s website. I figured that it was little difference from various pearl teas and that if I was supposed to break it to bits, they would have said so.

Turns out I think I did it the right way this way. I could see it in the pot in the beginning of the steep and it disintegrated pretty quickly. I can’t say anything about how it smelled because although I tried, I had just handled salmon so I couldn’t really smell anything other than fish. And I was pretty certain that it wasn’t supposed to smell like smoked fish.

A normal length steep for me gave me a very dark brew. It’s as black as coffee and it’s only when I hold it up to the light that I can spot any sort of transparency. I think maybe I’ve steeped it to death here, and I’m belatedly reminded of Carolyn’s method of many very ultra short steeps. Maybe that’s the way I should go with the other toucha.

It doesn’t, however, taste in anyway ruined. It’s actually very nice. A bit mild for a pu-erh possibly, but it’s not bitter at all. It just has that hint of astringency that tells me that I’ve used too much leaf for this length of steeping. There should be loads of steeps left in this one though. Shorter ones, mind.

There’s nothing to report on the taste otherwise though. It just tastes like pu-erh. Fairly standard. Default pu-erh. I got a sample of a plain loose pu-erh too from this company, and if they turn out to be similar (which I suspect they will) then this will likely be the one of the two I’ll prefer, simply because this is easier to deal with. It’s always good, I think, to have a solid plain pu-erh around in the cupboard and that’s something I’ve been missing for a long time.

Bit like a teabag actually, just without the actual bag.

I bought this ages ago and I forgot I had it, but the eNews from Nothing But Tea reminded me I still had it. I used 1 tuocha for 300ml water. After rinsing (30 seconds, boiling water), it had started to disintegrate and the wet leaves smelled very strongly, like peat and moss. I was a bit unsure of how to steep this, as the instructions say 5-10 mins but I usually steep pu-erh for a much shorter time. In the end, I settled on 3 minutes.

The liquor is very dark, almost black, like an espresso. It actually smells like coffee too, but this is only a slight note under the earthy notes that dominate the aroma. The taste is very strong, I should have used more water, but it tastes very…dark. I’m not sure how to describe it, but it has a very deep flavour that reminds me a bit of mushrooms and earth. It has absolutely no bitterness, though, and it is very smooth.