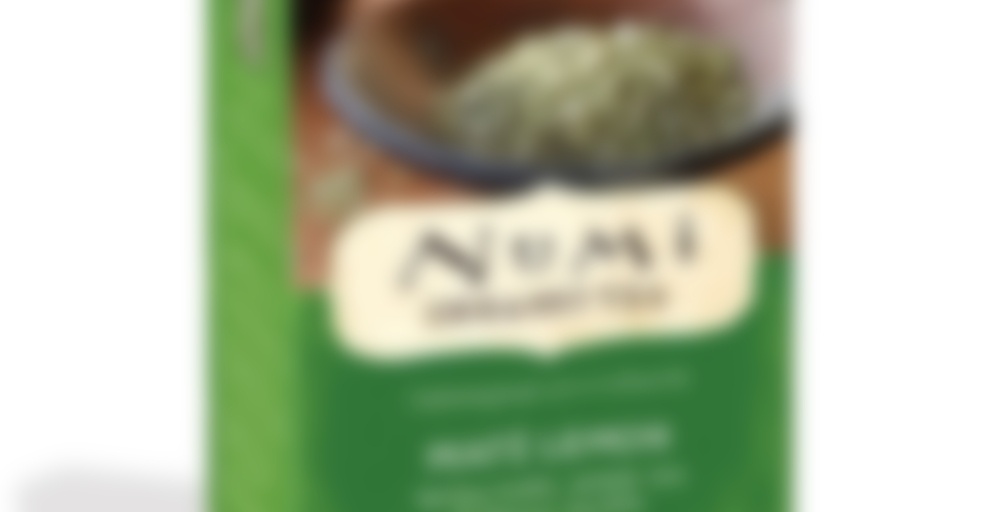 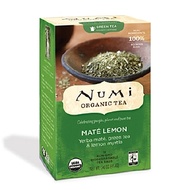 by Numi Organic Tea
65
You

For hundreds of years, Yerba Mate has long been a ceremonial drink of friendship, hospitality, strength, and courage to the people of the South American rainforest. This evergreen leaf is known for its pleasantly stimulating effect and for evoking a cheerful mental lucidity. We are proud to introduce this delightful tasting infusion of organic Mate with the Australian rainforests’ organic Lemon Myrtle, touted as herb of the millennium for its high citral content. Organic Chun Mee green tea, skillfully hand-rolled into the eyebrow contour of its name, unfolds a subtle, plum-like sweetness to the leafy lemon piquancy of Mate and Myrtle. This energizing blend uplifts one’s senses, as clarity arrives like birdsong after fresh rain.

And bye bye. I’m having my last bag of this at work today. I won’t miss it, but I salute it for trying. :-) And for its role in helping me learn what I like and don’t like.

Looking forward to the day when I have to figure out the logistics of bringing loose tea to work!

what do you have available to you at work? (sink? trash can in cube? hot water dispenser?)

There’s a sink, but I have to walk a ways to it. Also a hot water spigot that comes out of the coffee maker. And a trash can in cube. My biggest concern is the water being neither the right temperature nor filtered. It’s ok for the stuff I have at work now as they’re just decent bagged teas, but it would be sad to ruin something that’s really nice b/c of a water issue.

So far i’ve had good luck using my Kati / paper teabags with my work hot water spigot (next to the break room, a ways down the hall), a timer on my itouch, and cube trash can. I can do black or herbal teas with my hot water spigot – do you have a thermometer you could use to get the temp of the hot water spigot? That was my main issue I just took the temp for a day a couple random times and it was pretty consistent – I certainly don’t bring in my special limited teas but so far I’ve enjoyed doing my good blacks (harney and sons, the jade teapot). So far the filter thing hasn’t been an issue but our hot water spigot actually is filtered (it’s part of a flavia machine). I hope you find a way, it is nice to have a nice cup of tea at work now and then.

Yeah, I have a thermometer. I suspect the temp out of the spigot is variable and depends on whether someone has just used the coffee maker part of it or not. I’m still a ways away from being ready to give this a try, lots of bagged teas left. But I will keep the thermometer idea in my mind as the day draws closer. Thanks!

Backlog, had this with breakfast yesterday at the Saturn Cafe in Berkeley with a Southwestern tofu scramble. I’ve decided I really don’t like mate unless it’s roasted but the lemon in here drowns out the bitter mate flavor somewhat. Refreshing but I definitely don’t love this one. Maybe I should look for a plain green tea with lemon myrtle or make my own.

Had a bag of this on the ferry today. A bag I brought myself. :) The ferry only has Lipton, which I didn’t want to deal with.

I really enjoyed this! Loads of lemony herbal green flavours, a nice kick of caffeine, really easy to make. Definitely something I will have if I’m out and Numi teas are the only thing available.

I tried this blend a few weeks ago and christened it “Mate for Gringos”. It has a good, very accessible flavor—unlike straight mate, which can be bitter and grassy to a fault… I agree that the caffeine content is not at all negligible!

Lol! Sounds like me. :) I haven’t had traditionally prepared mate yet. One day, though. One day. :)

This morning I had Mate Lemon. Not bad. I’m sick yet again! ugh! I don’t want to try new teas as I don’t think I’ll taste much.

I didn’t even notice that this mate blend had green tea in it. If I knew that, I might have stopped the kettle just a little bit sooner. I didn’t let it boil, but it was probably just as hot as I use for my oolongs.

I have been meaning to brew this up for weeks now, but I have kept putting it off. When steeped, this smells overpoweringly like lemon but it is mixed with some earth to temper the tart smell. It smelled wonderful. You could taste the mate in the mix when it was brewed, but I could barely taste the lemon and another note that I now know was the green tea. I normally don’t like lemon in my tea, but I was sad that I didn’t taste more of the lemon.

I think this would make a very nice iced tea if brewed hot and then chilled and added just enough sugar to make it sweet. Not cloying sweet though or else you might bury the faint lemon.

This makes me miss my mate that I used to have daily. I’ve just been too lazy to brew it lately. I need to bring my bag out and brew it more.

This tea smells quite lemony right out of the package and not a whole lot else. There’s a herbal undertone but it’s mostly lemon.

The end result is still mostly lemony though I can taste a bit of the nutty/herbal flavour of the maté midway through each sip. There’s maybe a little bit of a green tea taste if I concentrate but it’s not really adding anything significant to this blend that I can tell.

It’s nice enough but it tastes like every other lemongrass/lemon myrtal-flavoured concoction out there. It’s not maté with lemon, it’s LEMON with a hint of maté and frankly if I didn’t know there were other ingredients present I would just think that this is a herbal lemon tisane, abit a nice enough one if that’s your bend.

Great look: I LOVE Numi’s drawings and art. Best art in industry.
Very Smooth: This drink is incredibly smooth. I love the sediments. Due to the supply of Mate Factor Fresh Green Yerba Mate as their base. Lemon Mate is always a bit rough to drink without sugar or juice, but very smooth, sometimes a bit stringent if brewed for too long
Very Lemony: As said before if brewed for too long a bit stringent. I love mate, so I enjoy more predominant mate, but I understand Numi’s customer base.
Taste is awesome, kept me warm. I drank this on the first day of cold in Denver, and it did the trick.

I really enjoy Numi, as MateFactor supplies their Mate which makes it very smooth. I don’t know the percentages of Green Tea and Yerba Mate, but maybe cut the Green Tea in half and Double the Mate and it would become a staple for Shade Tree

Pretty strong lemon myrtle taste. I often find yerba maté to be an unappealing flavor but here the unfavorable earthy, alkaloid-y notes were well masked. There’s green tea in this blend too but I’m not sure what its role is.

While drinking this, I enjoyed it but an hour later I’m finding myself on edge and annoyed with family talking which normally doesn’t bother me. This is an effect yerba maté has on me, whether due to the amount of caffeine and/or other chemicals I’m not sure. Nervous, aggressive energy that makes me want to wrestle and throw shit.

I’ve drunk yerba maté before powerlifting, felling trees and bike riding but no amount of physical activity ever seems to take off the edge.

Does guayusa do the same thing, since it is a close cousin of mate?

It’s probably just a combination of mate’s caffeine, theobromine and theophylline and how your system reacts to that. I don’t seem to have that issue, thankfully. I don’t like it plain, but do like it in the right blends. I definitely like it roasted more than plain, and find the taste of guayusa better than mate.

lizwykys: I tried to throw down my aunt but she got scurred and said go find my cousin. She likes to wrestle, too, and it would be an epic battle because we’re both strong af.

Mastress Alita: I’ve never had guayusa. Maybe when you drink down we can do another little trade. I really like Guayakí Yerba Maté in those tall cans because they’re well flavored but not obnoxiously sweet. I resort to them as people do with Red Bulls etc, but rarely because of the effect. Traditionally prepared yerba maté in a gourd would probably turn my stomach.

@derk: As I recall, you like hibi. I have a blend of guayusa, hibiscus, lemongrass, and stevia that makes the best iced tea in the world. Cold brew in either water or lemonade for caffeinated fruit punch goodness. I’ll just send you some sometime if you want to try it. You won’t really taste the guayusa though, it tastes like hibi punch. But you would probably know if it wants to make you punch a baby.

Look at these comedic comments.

Mastress Alita: Thanks for the offer. I do enjoy hibiscus. I’ll hit you up after I move and forward you my new address.

I’ve had a handful of Mate teas, and I’m coming to the conclusion that I don’t really care for this herb. I don’t really like the grassy, earthy quality it has. There are plenty of other caffeinated teas out there, so it’s not a big loss.

Reminds me of Good Morning Sunshine by butiki but not nearly as good.

Hmmm…I have mate’ and lemon peel under my roof…I sense a homebrew experiment coming. :)