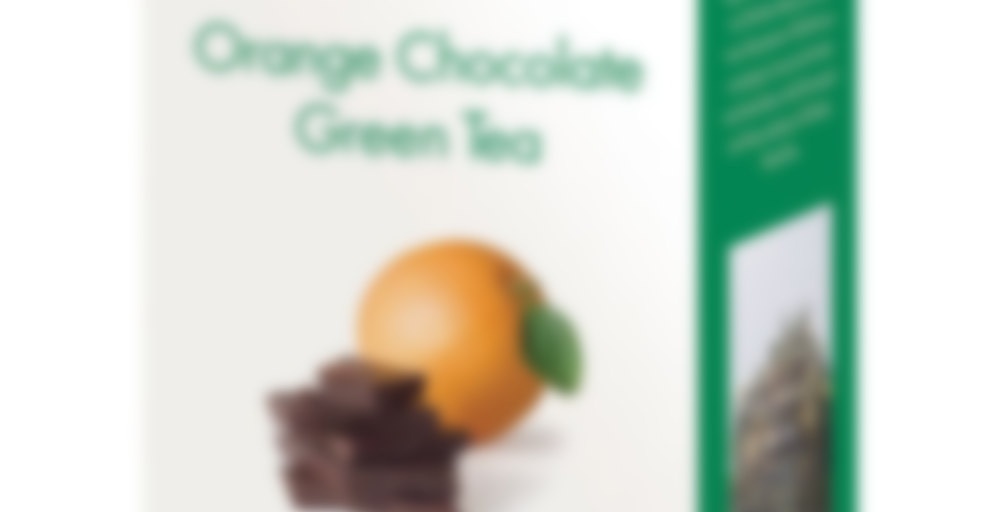 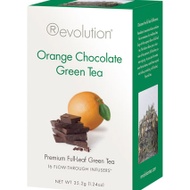 by Revolution Tea
61
You

One of the most original and luscious flavors you’ll ever sip, this blend combines green tea and the taste of chocolate and oranges. Yes, chocolate. Its aroma rises from every cup, which is always smooth, light and possibly addictive.

Sometimes I love driving 2 hours from my parents’ place and coming straight into work. Other times, like today, it just makes me sad and want to go straight home instead of working.

But there’s this little gas station on the way that makes the best sausage biscuits…and they let me fill up my travel mug with hot water at no charge. I had quite a few teas with me, but needed something bagged. This was the one that fit the bill. I quite like it, and it made me very happy this morning. Was a great compliment to a sausage biscuit!!

I’ve gotta say that this tea has a wonderful scent even if the flavour was a bit of letdown. When the name says ‘chocolate’ I want to taste chocolate in my tea damnit!

I have been everywhere looking for this. I think I’m going to cave and order it online.

Too bad it’s not really chocolatey – I love the idea of a chocolate and orange flavored tea!

Jaime, I have half a dozen bags left – I can send them to you if you’d like – I’m not overly attached to this tea or anything.

Really? That’d be great! Anything of mine I could interest you in?

This smells heavenly dry. I thought it might be a little tricky to steep it strong enough to get the chocolate without bitter-izing the green, especially with hot water out of McDonald’s tap, but it balanced out nicely. Extremely tasty—I’ll hunt this one down again.

It is Green Tea Tuesday around here – Dragonwell, Hojicha and Genmaicha. Time to get some flavored greens in the mix!

I found one individually wrapped bag of this and realized that I’ve been hanging on to it for 5 months now. I picked it (along with a few other of Revolution’s individually wrapped teabags) up from a gas station between seeing my family and driving 5 hours north to see the husband’s family.

In an effort to continue today’s green tea consumption I made this. Dry bag smells mostly like a minty green tea – strange. No where on the packaging does it say “Mint”. But I push forward. Brewed at the below parameters with 8 oz of water, all I taste is a slightly minty green tea. There’s no chocolate; no orange in my cup. Oh, the disappointment… Revolution you lured me with the orange and chocolate left me hanging with a green mint. :(

I’ve discovered that Pilot truck stops are one of the few gas stations (the only one I’ve found, really) to offer non-Lipton tea bags. When I’m on the road I sometimes want a little caffeine boost from a tea, and while I’m not expecting much, it’s pleasant to find pyramid sachets of tea. They actually have a variety of sachets, and I picked up a handful of them on my recent road trip, not for drinking on the road but for trying out later (who has the control over steeping parameters to brew a white tea on the road?). Who knows how old these are, since I don’t know what kind of tea turnover a truck stop in western Maryland has, but I thought I’d give it a go.

Anyway, this was one I grabbed because, orange chocolate, right? I love those flavors together. Dry, the sachet smells like green tea and ginger with a hint of orange, and those flavors pretty much bear out in the brewed tea. I brewed it for a bit longer than it said on the packet because of suggestions on Steepster, but still it’s primarily a very light green tea with some ginger notes (not very strong, but there). As it cools I get maybe a little orange, but no chocolate. Oh well. Disappointing, but then again, I bought it at a truck stop!

I <3 Pilot Travel Centers for serving (and selling boxes of) Revolution teas!

Used the hot water spigot, let it steep about 3 minutes, then added some cold bottled water. Left the tea bag in and it stayed flavorful without getting bitter!

On occasion, I’m moved to buy things because the planets have aligned.

Let me explain. I like to look at items on sale, but I don’t convince myself to buy them merely because they’re on sale. I only buy them, generally, if they’re something I can (and will) actually use.

On rare occasion, I’ll make an exception…such as when I find something that looks as though it really shouldn’t exist. At all. Because I’m in such disbelief, I’ll laughingly buy it.

This tea was an intersection of those two habits. Look at the name: Orange Chocolate Green Tea. Any two of those things sound like they’d go well together, yes? BUT NOT ALL THREE. THREE IS RIGHT OUT.

Except…it’s…not bad! Not great, either. It’s kind of like when you’ve got a dessert sampler platter and you’ve eaten the delightful morsels it once held…and you’re surreptitiously trying to get those last little crumbs of everything up because it would be a shame to waste it. Everything sort of gets mashed together on your fork, but because you were familiar with the distinct flavours of each thing beforehand, you don’t mind it as much as you otherwise might.

Once the number three, being the third number, be reached, then lobbest thou thy Holy Hand Grenade of Antioch towards thy foe, who being naughty in my sight, shall snuff it.

At least, I hope you were quoting Monty Python. Otherwise I just sounded completely insane. [Then again, what else is new?]

Sokay, you were spot on. XD

I tasted no chocolate, a bit of citrus-y zest (did not taste like orange though) and a bunch of spices (but not any specific ones). Very disappointing because I was hoping it would taste like Terry’s Chocolate Oranges. I didn’t get any green tea either.

I was hesitant to try this since I’ve tried “chocoate” flavored teas before and did not like them. This one was pretty good though. I actually didn’t taste chocolate in it, but that helped me like the tea.

I have to be blatantly honest and say that I don’t usually like green tea, except that my brother has been on me lately to start drinking it because it’s supposedly so good for you. I stumbled across this while I was on the hunt for groceries and thought I might give it a try. After all, chocolate is definitely a good incentive to get me to drink something.

But I have to admit, I don’t really taste the chocolate in this tea. I can smell it faintly in the dry mix, but that’s it. Surprisingly, I actually like this tea despite that fact. I don’t know why. Perhaps it’s the combination of the citrus with the green tea that makes it easier for me to drink. But don’t let that fool you into thinking I’m only tolerating the flavor. It’s a soothing fix in the middle of the work day when I just need an easy pick-me-up and my other teas will take too long to brew.

I’ll have to go somewhere else for my chocolate fix though. Sad day. =(