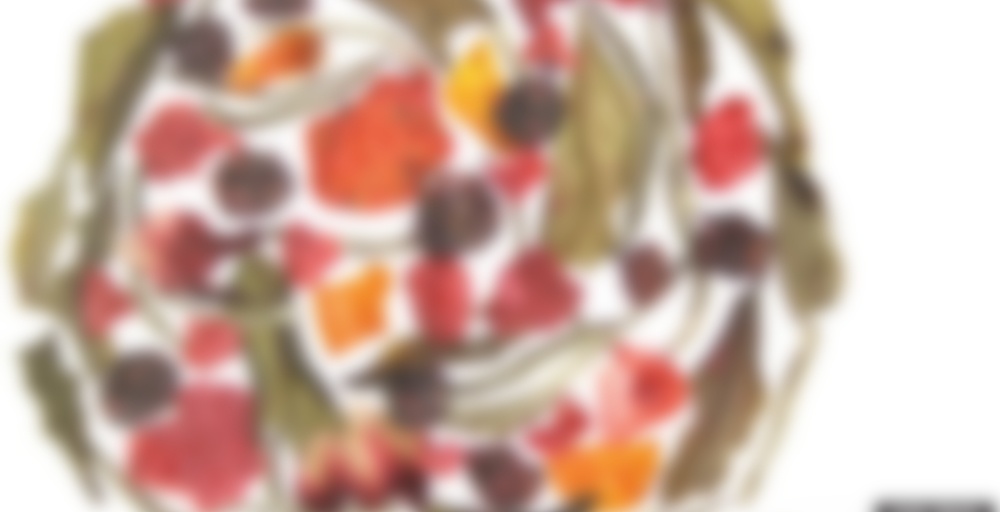 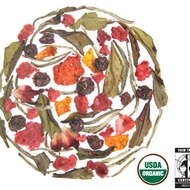 Steep Me A Cup of Tea

Another sample from the swap with Meghann – thank you! I’m intrigued by the plum flavor billed on this one, as it’s a fruit that can taste so different depending on the variety and ripeness.

The dry leaves are very pretty, with bright red chunks sprinkled among the light green tea. The smell is fresh and fruity/berry-like, so a good start so far. Recommended parameters call for a long steeping time, so I’m giving it six minutes at 185. The resulting liquor is gorgeous – a clear and light pink that looks very much like plum wine. Aroma still following the fruity and sweet trail…

The taste is tart, but stops before becoming unpleasantly sour. There is a dim background flavor of white tea, but I’m getting fruity (berry and yes, plum) flavors for the most part. Overall it’s a pretty tea but not one I’d need on a regular basis. Glad I had a chance to try it though!

I did not suspect that there was hibiscus in this when I started brewing this. Therefore, I was surprised when I opened the fridge and found a pink tea waiting for me.

This is quite nice as a cold brew. The flavor is definitely berries and plum. The hibiscus makes it a little tart, but I’m fine with it as a cold drink. Very nice tea. I think husband would enjoy this. He seems to like hibiscus. :)

Thank you for the sample TeaEqualsBliss!

The picture doesn’t lie; this tea looks like a Crayola box. There’s certainly a lot for the eyes to feast upon. And it brews into…well, they call it ruby. I don’t think it’s quite that rich in hue, I’d call it more of a dusty rose. But I’m probably splitting hairs at this point.

The smell is just about as loud as the color. It reminds me of Blow Pops. Or bubblegum. Specifically one of those old school brands like Bubble Yum or Fruit Stripe Gum [who remembers that?]. The kind of gum that loses its flavor 5 minutes later. It is fruity. I mean, it is FROO-TEA. This tea is SO fruity… [HOW FRUITY IS IT?] This tea is SO fruity that it belongs at a male burlesque show. In fact, if teas were people I think that Plum Berry would be a drag queen.

And a rather fabulous one at that.

The smell is somewhat dampened [no pun intended] when the tea is wet. The actual liquid smells like something very specific that I can’t put my finger on, but it isn’t fruit. I’ll think of it in a week.

The tartness of the hibiscus is quite obvious, but I don’t mind that flavor, so I’m enjoying it so far. However, they list an entire encyclopedia of ingredients on the bag and . [I mean, schizandra berries? Are those for real? They sound like something Neil Gaiman would make up. Do unicorns eat them?] I’m somewhat disappointed that I can’t pick them out, but the aftertaste is rather hectic – there’s a lot going on. Once the novelty of this wears off, perhaps I’ll be able to separate the flavors more easily. Or perhaps once it cools.

It’s surprising to me, well, one that this gets steeped for this long. The only thing I steep for 6 minutes are pu-erhs, maybe the occasional herbal. But two, I’ve never had a white tea be this strong. I prefer my white teas to be more delicate – more of a pinky-up affair. I’d really call this an herbal more than anything else, but they say there are white tealeaves in it. Not sure what the point of it is, because anything from those leaves is surely put into a choke-hold by what I am coming to affectionately think of as the crunchberries.

One last thing that I’m really noticing about this tea is that it’s leaving me with a bit of a dry mouth. Is it tannins that do that? I’m not sure. Anyhow, it’s not unlike that sensation you get after drinking lemonade. I’m having to chase it with water, which I’m sure my bladder will be protesting later.

So, Plum Berry is sassy, a little sweet, and maybe just a touch overwhelming. Like a game of drag queen bingo, this isn’t something I want to visit every night, but it’s going to be fun every now and again.

BTW here’s a link to the Wiki article about schizandra berries: http://en.wikipedia.org/wiki/Schisandra_chinensis

This situation reminds me of one of my favorite snarky websites of all time.

I cannot believe you compared this tea with a drag queen and it actually worked! What a fun tasting note!

A Neil Gaiman reference in a tea review? YESSSS

The first thing that came to mind when I smelled this DRY was KOOL AID!!!!! Once infused it does smell more like plum! And maybe a hint of raspberry.

This one is alright! Not bad! Thumbs up for creativity! It’s quite plum and berry like and it’s juicy but you can also taste the white tea a little underneath. It might be a little too flavored for some white tea purists but it’s alright!

Has it really been twenty days since I last made a tasing note? 0_o The usual end of semester stuff has been causing me a lot of stress and I haven’t really been trying any new teas. This is another sample I got from Meghann I believe. I don’t get to try many Rishi teas as they charge an arm and leg for shipping to Canada so it was a nice surprise when I was rummaging around for a random tea to try and dug this out of my Cupboard.

Despite the hibiscus pauses to shudder it really isn’t all that tart – or at least not beyond what I’d expect out of a fruity-tasting tea like this. And TeaEqualsBliss is right, it does sort of taste like (warm) KoolAid although the white tea also manages to impart an interesting light, floral aftertaste. This is another tea I’d like to experiment with having iced I think.

Thank you to TeaEqualsBliss for sending me some of this tea! It is one that I have been interested in trying for a while now.

This is tasty. It has a very fruity taste – some might think it’s a bit too much on the fruity side – but I like it. The plum is more of a sweeter, almost candy-ish plum rather than a true plum taste. The berries taste sweet and tart. The hibiscus imparts a deep hue to the brewed tea but not a lot of flavor, for which I’m grateful.

Not bad, very refreshing and cooling to the palate after eating a rather spicy snack.

KeenTeaThyme
Delete
I had high hopes for this one… but trust your judgment. The quest for a great plum tea continues!

Thank you to Meghann M for sending this one my way! Plum Berry is easily one of the fruitier teas I’ve had. The wild berry flavor certainly dominates. It is luscious, somewhat tart, and very strong. I can still taste it on my tongue and it’s been a good twenty minutes! The plum is there, but I have to search for it. It almost seems an afterthought, a nearly forgotten second string. This tea is quite flavorful and tasty, yet the plum should not have received top billing.

I love this tea. It is a bit pricy for me (I am poor and thrifty), but well worth it. I agree with the other sippers that a long steep time is needed. It is great hot or cold, and is one of the only teas I like just as much on a 2nd and 3rd steep.

The smell of this tea is intoxicating. Dry, it could sit in a bowl and improve the room. Wet, it looses it frangrance, but as beautiful as the smell is, the tea takes on an even prettier glow.

And then the taste. It is subtle, sweet, and complicated. I can taste the berry and hibuscus, though I can’t pull out the plum directly. It is a really mild tea, with mild flavors. This is a tea that newbies can enjoy, but that seasoned sippers will also appreciate. I cannot recommend this tea enough.

This is the first white tea I have EVER steeped that long, as per Rishi’s instructions. I am pleasantly surprised. This is really nice!

not for me.
this tea just cannot decide if it;s a pomegranate or a cranberry or a plum or a cherry. there’s something about the scent..and the taste that is just plain off. I dont dislike it, but i don;t love it