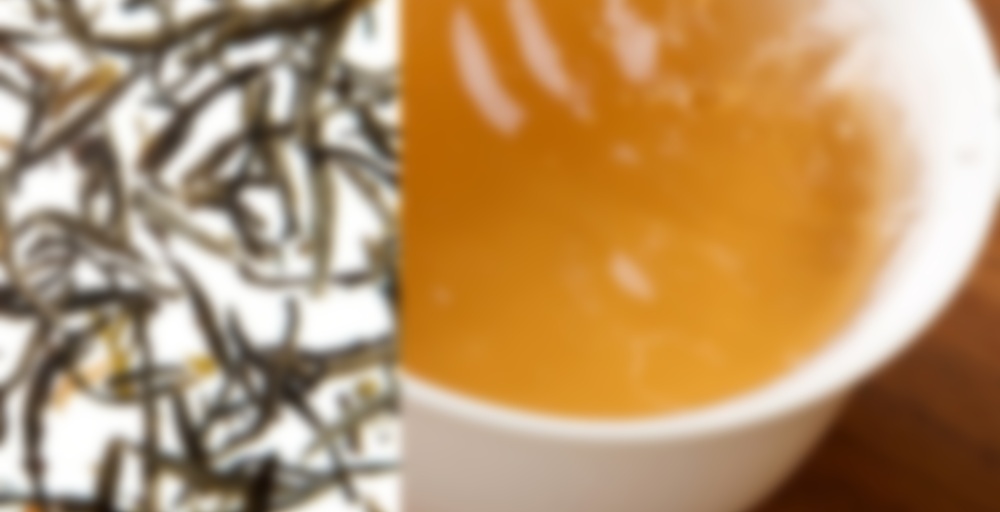 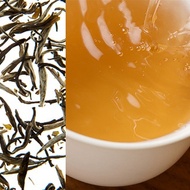 Tea Story: The first time Chistine drank this tea, she was swept away buy the desire to take a bath it! So delightful are the aromas that arise from your tea cup. Floral, slightly sweet, delicate, lightly caffeinated, and sooo soothing. White teas are known to be high in antioxidants, while jasmine is known for its relaxing qualities. Think of this tea as medicine: a delicious, aromatic remedy to all the day’s stresses. If only all medicine could be so lovely!

Food Pairing: Pair this fragrant jasmine bouquet infusion with a sweet flour crepe with orange marmalade and almonds. Or cookies with sandy textures that aren’t too sweet. At the tea lounge we like to drink the Jasmine Silver Needle while snacking on our cherry oat scone. Like with other white teas, you’ll want to remember not to overwhelm the palate with flavors that will overshadow the delicate taste of the golden infusion.

Really, you could just read the description to this tea, because that is what it tastes like. It is light, it has the sweet and savory taste of hay, and the perfumed taste of jasmine is woven throughout.

The silver needle and the jasmine are both easy to find; one doesn’t drown out the other, which is surprising. In most jasmine teas that I’ve had, the jasmine has been very pronounced. Pronounced enough that, while it might not be belting a power ballad in your ear, it’s loud enough that you can’t ignore the fact that it’s there. While I appreciate that, it also means that if there’s anything else going on in the tea it can get drowned out a lot of the time. That isn’t a problem with this one, and I am completely enamored with now this ended up balancing out.

Some teas intertwine like vines on a trellis. Some swirl together like a chocolate and vanilla soft serve twisty cone. Others blend like fruit juices. This is like being outdoors during a summer afternoon, drunk on sunshine, with the scent of just baled hay and jasmine blossoms wafting to you on a light breeze.

I’ll be buying more when I’m done with this tin.

Needs me a tin of this too! My Adagio one is all gone and I’ve been missing Jasmine Silver Needles =(

How have I not had this one before? I would have paid more attention to it if I had know I hadn’t logged it before. Oops!

Smells of dark, exotic jasmine. Not overpoweringly but just strong enough. Really pretty. Mouthwatering. Mmm. The flavor is a lot like the smell. Very dark and exotic. Like a dark purple flower. If you ate it. Okay, maybe not, but if a dark purple rainforest-y flower had a non-flower taste, it’d taste like this. With a light sweetness of jasmine laid on top of it. I’m guessing that dark, lovely flavor is from the Silver Needle which is pretty nifty since I’ve yet to find a plain Silver Needle that doesn’t make me think of soybean water. So this makes me hopeful that I can find a SN that is yummy, not like boiled veggie water. Because this is lovely. My cup went away very quickly.
5.9g/12oz

I just bought me a big ol’ tin of this. Couldn’t help it. And with spring melting the snow currently, it feels very fitting.

Mmmm…this tea is delicious. It has just the right amount of jasmine, especially noticeable in the scent and the aftertaste, without being overpowering. The silver needleness is still there and is quite nice. The tea brews darker than I expected and is very smooth and relaxing, but still nice to look forward to first think in the morning. Thanks Samovar…I’ll enjoy this tin and order from you again in the future.

Having just sipped down a different jasmine silver needle that didn’t do much for me, I have to say this is pretty amazing.

I wonder whether it is the steeping instructions that make a difference. I steeped this in 8 oz of water. I intended to steep it for 4:30. I got to that by subtracting the minimum of 2 minutes from the maximum of 7, dividing by 2, and adding that number to the 2 minute minimum.

But I started doing something else and didn’t hear the timer go off. So I really can’t say how much time passed. Which is sad because that means I might not be able to recreate this. But why get exercised over that, since Samovar is no longer selling this. Sigh.

In any case, this is far more flavorful than any white tea I recall having, and it isn’t just because of the jasmine. Though that is a big part of it. There’s a piquant edge to the tea that makes me think of black tea but without the heft and depth. I taste hay, for sure, and something flowery and sweet. It’s almost like pollen, but since pollen isn’t a choice I’ve called it nectar. It’s sort of that pre-honey flavor/aroma that you get from some flowers.

The leaves were quite pretty. Silvery green. Made me think of snow on conifers. The liquor is a deep golden yellow, and some of the hairiness of the leaves sent little floaters into the tea.

I would SO drink this again. If only it was still around. Double sigh.

I just had that kind of mishap with the Jaberwocky lol. And that sucks because good jasmine whites-which are already good-are awesome. Hopefully you’ll figure out how you made it ideal for next time. I personally brew tea based on aroma and sips. If it’s strong, I gong fu it. If it’s light, I let the smells change. I sip it if I like the smell, then decide whether or not it’s ready to drink. Sometimes I use grandpa style to taste the different dimensions provided if I have enough to experiment on.

OMG so good iced! I let it steep in the fridge for a long time (~20 hours) but the result is just the right amount of tea flavor for me, plus a pronounced floweriness, with no bitterness or darkness. The tea is a lovely light yellow. The jasmine has crossed over almost into orange-flower territory, it’s so sweet. This would be sooo good with dessert, or with a middle eastern or Thai dinner. I think I’m going to be making this a lot!