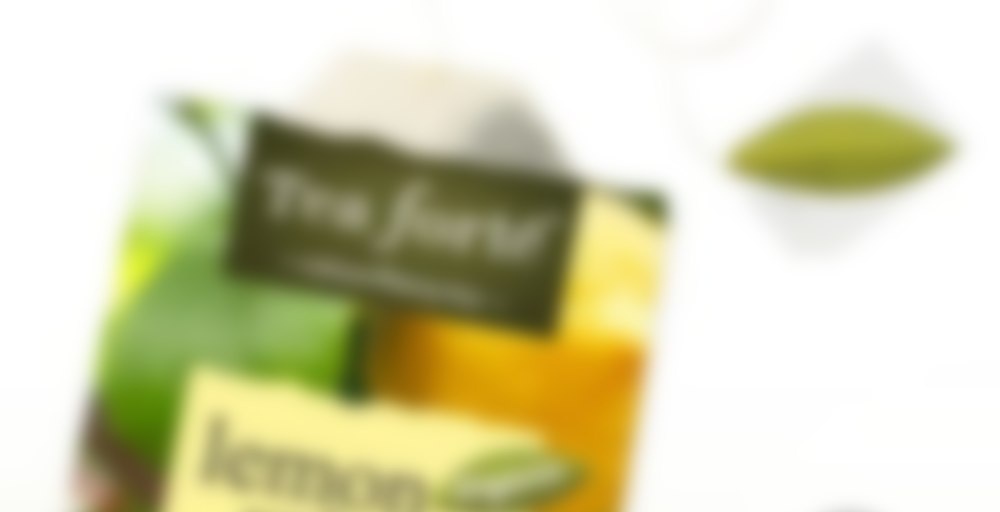 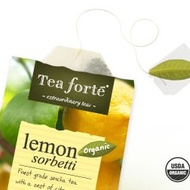 The heady fragrance of fresh citrus with the sweetness of wildflower honey. A delicious taste of dessert any time of the day. (USDA Organic).

To prepare: Infuse tea in near boiling water for 3-5 minutes. This blend contains some caffeine.

I got the looseleaf of this in a trade with Kaylee, so thanks!

The leaves smell nice, like under sweetened lemonade and you can definitely pick out the lemongrass as well.

They taste is…okay. It’s certainly lemon-y, but it’s more lemon juice than lovely lemon zest. The flavor isn’t artificial and the tea isn’t astringent, but I actually lose the Sencha to the lemon flavor.

I don’t really see this as a dessert tea, and it tasted a little generic. I didn’t really like it enough to finish my 16 ounce mug, and 5 or so were lost to the drain.

This is quite nice. The Sencha is sweet and light, and the lemon is a bright, uplifting flavor. It doesn’t overpower the Sencha. It’s mellow yet refreshing. The delivery is very smooth, and it is not overly astringent. The lemon has a tartness to it but it isn’t pucker-y sour.

I’ve got this in the loose leaf version. The dry leaves of this smell just like homemade lemonade! Unfortunately, it doesn’t smell quite as nice brewed. It just smells like lemongrass and bitter lemon. Nice lemony yellow color though.

This tea tastes fine, but I feel like I was overcharged. I could get the same flavor by squeezing half a lemon into a cup of generic bagged green tea. This tea isn’t bitter, or astringent, or fake-tasting. Someone who likes Arnold Palmers would enjoy this. Adding some stevia did bring out more of a sorbet flavor, but if I’m looking for a lemony dessert tea I think lemon chiffon is still my go-to.

I’d recommend this to people who want to drink green tea but dislike the taste of green tea. The lemon flavor is more prominent, although I can certainly taste the sencha in the background. Quite good for a bagged tea.

I know, I know. It’s February already. I intended this for yesterday, but time got away from me. My favorite pie of the moment is lemon ice box pie from Jim ‘N Nick’s. I think Jim ‘N Nick’s is a local restaurant, maybe originating in Birmingham but now spread throughout the southeast US. (Just checked and there is a lone location in Aurora, Colorado.) Anyway, it’s mostly known for its barbecue. They have some other great items on the menu too though, one of which is their lemon ice box pie. It’s wildly expensive for a slice of pie, to me at least, so I usually savor a few bites over the course of a few days (if I can make it last that long). Equal parts tart lemon and mile-high whipped cream with a buttery graham cracker crust. It’s heaven on earth.

This tea comes closest to that puckery lemony flavor, but of course it can’t compare. It would be unfair to expect it to. As a tea, and a green tea at that, it’s enjoyable. It’s not tart like I expected but instead tastes more like Pez candy. There are quite a few lemony elements in this tea, so I’m not sure which is giving me that impression. Contenders are lemon verbena, lemon myrtle, lemon peel, lemongrass and natural lemon flavor. I’m guessing it’s either the lemon verbena or the lemon myrtle. I’m not familiar enough with them to match the flavor. So yeah, not as enjoyable as the pie but definitely a nice enough green tea. Coming from someone who doesn’t really like green tea, I think someone who does would probably like this one.

This tea is fine. It’s a little lemony, a little grassy. None of the flavors are very strong— they’re not bad, but they’re also not that exceptional.

I was so glad this was in Another TTB! I’ve been wanting to taste it and I loved it. Normally I don’t like green teas, but the citrus in here made it a delicious offering. I may have to buy some of this myself.

I go to Bliss Spa in DC frequently and they serve Tea Forte in their relaxation lounge. I have tried the company’s fancier-packaged teas, however, this one is a plain paper tea bag. I agree with a previous reviewer; this tea is a good introduction to green teas if you typically dislike them. You can taste the sencha, but the lemon is more prominent. It doesn’t clash with the tea. I felt like it tasted like green tea with a squeeze of lemon juice, versus citrus zest. I probably would not purchase this for myself.