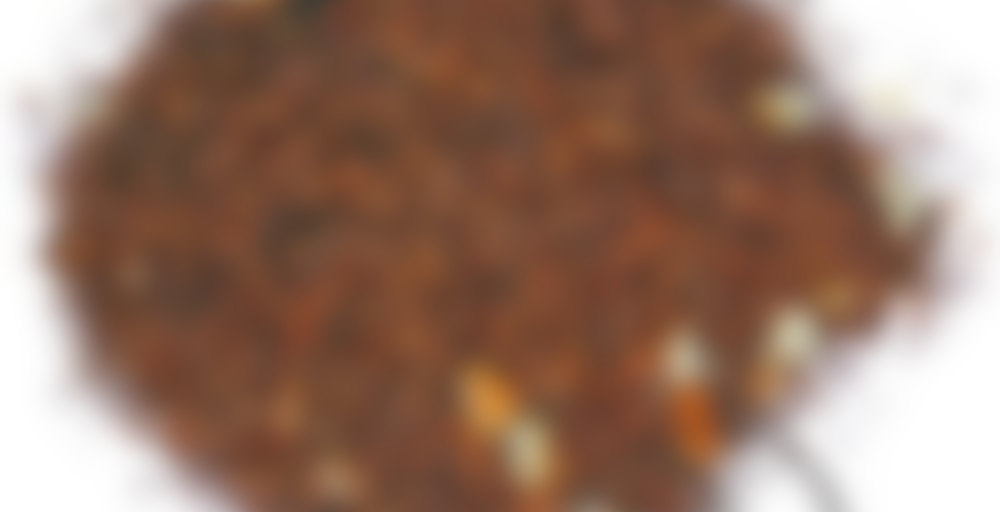 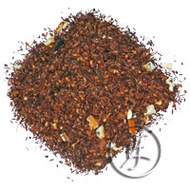 Cinnamon and Cloves lend a spicy warmth to this Rooibos Blend. Add in a touch of Orange flavor, and you have an interesting and different blend that you will not find in any grocery store!

Let me set the scene. It is a gloomy rainy day. The house has fallen dark even with the occasional curtain open to allow what little light that may actually enter. I sit here quietly reading with my dear husband tinkering up the office and my 3 year old daughter taking a much needed nap all alone in the quit of my thoughts in my living room. All I can hear is the dull sound of rain passing through the video montior setup up in my daughters room. Then it dawns on me this is the perfect chance to have this tea. It smells of excitement, spice, and allure. Perhaps the perfect choice on a rainy day in Chicago. Here are my thoughts…

First, a strong sensation of “Red Hots” I was worried but then I take a sip it was a flavor explosion, this rooibos blend is not to be messed with. It is loud and in-charge. It is sophisticated. I had the urge to raise a pinky. Who am I kidding I raised my pinky. The “orange” is in my opinion the magic ingredient, simply brilliant. It keeps the cinnamon and cloves from fighting to the death and creates a controlled experience. It is like “Xanax” for teas. It let’s out just enough of it’s wild and bold character without being obnoxious and as a result a wonderful warm tea for gloomy days and cold days too.

My husband picked this sample out. Too bad I’m catching a cold and couldn’t really taste it. Seemed like an average orange/cinnamon rooibos, but my tastebuds are off.

I hope that you feel better soon!

This is another good rooibos from TeaFrog! It really reminds me of Zhena’s Fireside Chai. This is once again very smooth and non-woody. The spices are very chai-like, but I’m not really getting the orange from this blend. It is very good with milk and honey.
I think I prefer the Tiramisu rooibos, but this one is pretty acceptable also.

I was really excited to taste this tea. The ingredients of orange peel, cinnamon and cloves sounded wonderfully delicious. The directions recommend steeping 1.5 tsp per cup of water for 5-6 minutes. I was using a 2-cup teapot, so I doubled my amount of tea and steeped it, using boiling water, for five minutes. The smell of cloves and cinnamon wafts up from the pot to my nose enticingly. This tea is aptly named, as it reminds me of sitting next to a fire, perhaps during the Christmas season, where these smells are often common around my home.

Pouring myself a cup of this dark, red-orange tea, cloves take the greatest part of its aroma, with edgings of cinnamon in that scent. Sipping this tea, it goes down smooth, the biggest flavour being the cinnamon and the rooibos (which is pleasantly not overpowered as in many rooibos blends I have tried). The orange aftertaste is quite appealing.

My overall impressions were that this tea has very well-balanced flavours and really does make for a very soothing beverage. I certainly enjoyed it and would rate it a 90/100.

My free sample with my TeaFrog order (love free samples!). I was quite curious about this, as I haven’t had many cinnamony teas and the combination sounded intriguing. The smell is SUPER strong, it was basically able to fill my studio THROUGH the packaging. I tried to combat it with incense, but that proved to be only a temporary solution. Thankfully, the effect has since faded.

The first steep was…mostly cinnamony, that is pretty much all I tasted, no rooibos no orange, nuffin. It’s interesting to read other people’s impressions – especially teabird, who had basically the opposite reaction. Am I that big a wuss or did we just get a very different batch? The world may never know. I DID get more orange when the tea had cooled, but that is hardly optimal for a tea called “fireside.”

I’ll try to vary my steeping parameters a bit before I give this a rating, don’t want to judge it unfairly because I was adding too much water, or something!

Boiling 5 min, 0 sec
Yours I Like This
5 likes
1 comments
Edit

My tastebuds might just be skewed by Harney’s Hot Cinnamon Spice, which is ridiculously (deliciously!) cinnamon-y. Fireside is probably better balanced :P I just like my cinnamon crazy strong, so the rooibos stands out to me here. Did you ever eat “atomic fireballs,” the cinnamon candy? I may have loved those as a kid…

I’m very pleased with this. I used 2 tsp for about 14 oz of water and it came out just right – the spice flavors are well balanced and naturally sweet. The natural flavor of the rooibos is there in the background too, and plays well with others. I think I’ll end up having some of this on hand as one of my non-caffeine drinks.

Boiling 6 min, 0 sec
Yours I Like This
6 likes
0 comments
Edit

I’m a big spice lover, so I was a bit disappointed by the weakness of the cinnamon and clove flavors here; there was a lot of rooibos, a bit of cinnamon, and a little clove and orange. Others might call it well balanced, but for me it was weak. I liked the flavors! I just wanted more of them. I think I’ve been spoiled by Harney’s cinnamon spice, and another rooibos cinnamon tea I had from Light of Day :(

For reference, I used 1tsp in 8oz water; since the samples are generously sized, I’ll try using more leaf in my next cup and see if that’s better.

The smell of the dry leaves is oh so good, I can’t seem to get my nose out of the bag long enough to put some leaves in the infuser basket…ok, I am out of the bag and placing leaves in the teapot…5 minute wait…pacing….Red brew in my cup, it is a red tea afterall. Cinnamon is the emitting from my cup, a nice cinnamon, not fake or candy like. I like it, I can see myself drinking this in the winter more than in the summer, but yeah, I like it!

Wow, this tisane is good! It reminds me of a spiced chai, but without the caffeine! The name is appropriate, too. I want to sit by a fireside when I drink it. I will admit, I pulled out a couple of cloves before I steeped it, I am not a big fan of cloves. It is good with just a touch of sugar.