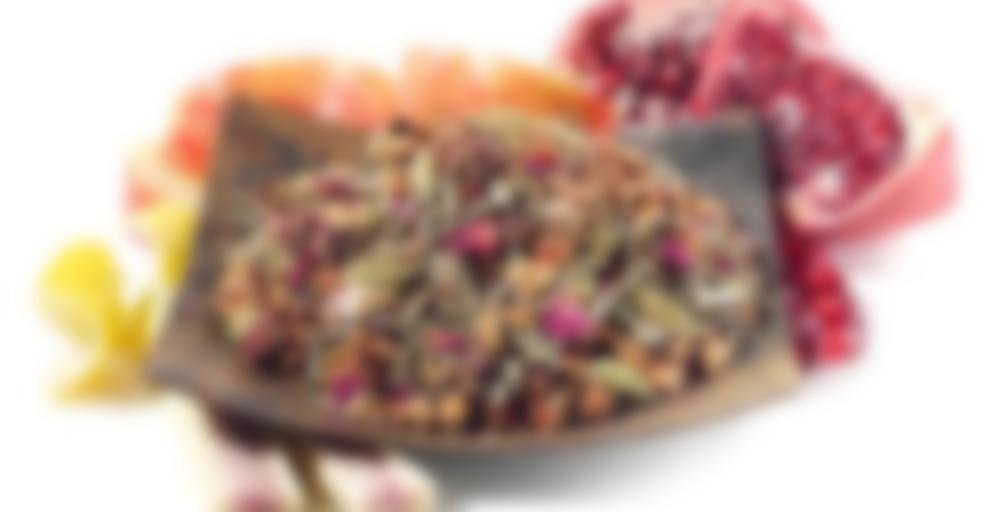 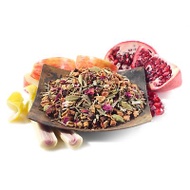 with 34 Ratings Rate this tea Rate This Tea

Use 1.5-2 tsp of tea per 8oz of water. Heat water to just at boiling (208 degrees/98 degrees Celsius) and steep for 5-6 minutes. For stronger flavor, use more tea leaves.

I suspect this is another tea of the month club addition. It’s still available at Teavana as of this writing.

I’m not sure I would recognize this as a rooibos blend if I drank it blindfolded. I can definitely see the rooibos, but what I taste is lemon and some apple. The lemon leans toward a lemon myrtle-y version even though the flavor comes from lemongrass; it’s got a touch of bitterness to it, but on the other side is a lingering sweetness. I don’t taste pomegranate, and I don’t taste the cardamom, but if I stretch my senses really far I might be able to get some pomegranate in the aroma. It’s mostly lemon and apple as well, though, and the liquor looks like apple juice.

Since I mostly taste lemon, I find myself comparing this to other Teavana lemons. I like the Lemon Youkou better than this, and I like the Strawberry Lemonade best of all. If I could taste more pomegranate this might be more interesting. Next time I’ll try overleafing more (I used heaping teaspoons) and see if it comes out.

Brewed this up iced last night to enjoy with lunch today. I was quite surprised at how spicy this was. Granted, there are cardamom pods in this, but I wasn’t expecting it to be as noticable with the lemon and pomegranate flavors. I will certainly have to try this hot next go round as I think it would be more enjoyable for me that way.

Made this one as a cold brew. Brewed for about 12 hours. I was a bit disappointed because it was not as “juicy” as I expected. This one was much more juicy and thick/heavy when hot.

I am getting tastes of apple, lemon, pineapple, lemongrass, pomegranate and strong cardamom. It is still good. Seems to be quite complicated in taste when cold. Not something I think I would enjoy often, but I am glad I tried it so I could realize how complex this tea really was. While drinking this one, I spent most of my time trying to figure out what exactly I was tasting.

I’m working my way through the cupboard now, turning each tin to the back until I’ve worked through them all once… I’ve been procrastinating this one, thinking it’d be too summery sweet and fruity.

It’s not. It’s a fascinating mix of flavors, and I can’t really detect any one overpowering the rest. It’s a delicate balance of a lot of heavies, and I am impressed.

I’m a little embarrassed to admit that I did add a small amount of agave nectar before I knew what I was doing, but I don’t think it’s detracting from anything that’s going on. I’ll do a second steep with none.

Well… it’s just that it’s pretty fruity-sweet already. I don’t know why I reached for the syrup but I was already adding it before I really realized what I was doing.

This would be awesome iced, by the way.

It’s ok, I’m the person that never sweetens tea of any temperature and I put just a drizzle of maple syrup in my maple sugar black:) It’s pretty darn good, but I wish I could find a green version, I’m not so much of a black tea person.

Yep! I grew up there, down in the SE corner of the state, near Lake Geneva. I see you’re a cheesehead, too!

Yep, except for I can’t stand the packers (this week was the one and only game I’ll watch this season- and I didn’t root for the packers) and aside for pepper jack and mac and cheese I don’t really like cheese. And I don’t drink beer either lol. Although I wonder what a tea w/ hopps would taste like?

I’ve had this one a couple of times this week without logging it. When I time the steep, it turns out nice and light and fruity. It’s delightful.

Once I didn’t time it, and the backnote was very strong of (I think) the cardamon, which just threw the balance all off. It was weird and I couldn’t finish it. This tea is not forgiving if you overbrew it! Bleh!

Maybe that’s why I never liked this one. I finished most of it before I realized that I like my teas steep on the short end of the time recommendations.

If you have any, definitely try it understeeped. It’s more fruity that way, and I love it. Oversteeped it’s BLAH!

I finished up the last of it earlier this year.

I had this last night. The juiciness of this really surprised me. The apple flavor shone through and the lemon and pomegranate seemed to act a bit in the background to make the apple seem tart. I really really wanted to like this, but the spice/cinnamon seemed to take over a bit too much for me. If you like cinnamon in your tea, this is a good one to try.

They got me with this one. I stopped in at Teavana to get some of their Moroccan Mint to try. This is the first sample they pushed at me. The store had it iced, tasted good. So being the sucker I am, I bought some. Got home, brewed some up according to the directions and it barely had a flavor. First cup I drank hot. Second cup was iced. It did taste a little bit better that way, but still not like the store sample that got me to buy it. As of now, I’m adding a bit to my black tea, both when I drink it hot and when I brew it to make iced tea.

Since finding this site, (at least I think I read it here) I found out that Teavana brews their samples with more than the amount listed on the tin and add their rock sugar.

Another tea that I have but haven’t Tealogged yet. I made my husband a cup of this this morning when I had my first cup of the Orange Rooibos. I made myself a cup from the same leaves as a break from the Orange Rooibos. I find this tea so-so and am just using up the last of it. The green rooibos in it isn’t really noticable but you can taste the green cardamon and lemon grass as well as the floraly tones. I brewed it a bit weak because I think the taste is rather strong.

Thanks Meghann M for the sample of this one.

Its pretty good. The lemon is pretty strong with this one, but not overpowering. The Apple gives it a bit of a tartness to it. I’m not really tasting any of the pomegranate.

I can see this one being a great iced tea especially with maybe a bit of mint throw in. Sounds like a great summer drink. Maybe even make it up as a mojito.
Yours I Like This
4 likes
0 comments
Edit

First sip is a punch of that itchy piney taste I’m not fond of with rooibos. A slight fruitiness to it with clear citrus and lemon after notes. I can’t get any pomegranate out of it, but there is a whisper of cherry. Overall, this is a perfect “I’m sick and this helps” tea reminiscent of neocitrin. I would only drink it then.