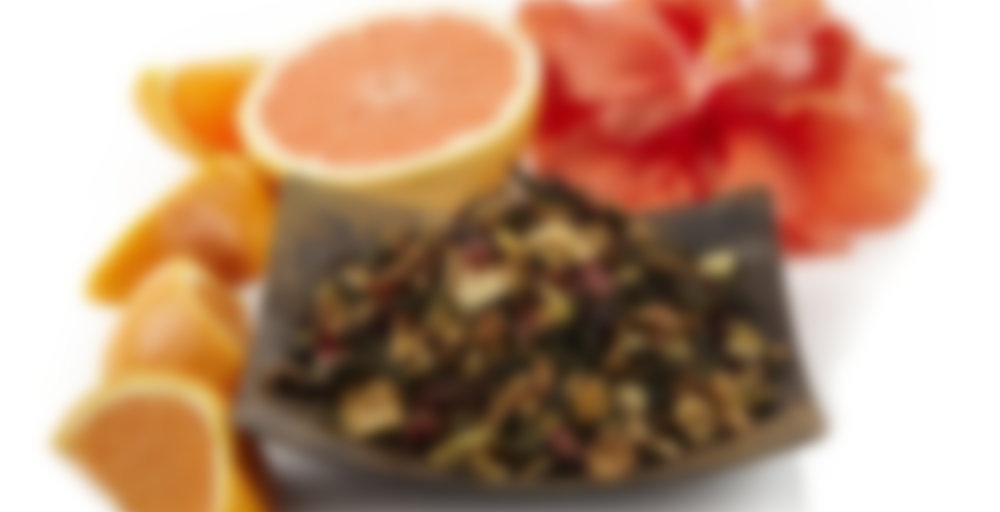 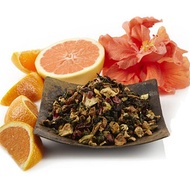 Be transported to the wild orange groves off the coast of South America in a cup of this bright citrusy and exotic floral blend. Brimming with a symphony of melodic succulent flavors including juicy oranges, soft marigolds, hibiscus and rose petals, this deliciously sweet green oolong tea ends with a lovely lyrical floral note. Wonderful, served hot or iced.

Not a terribly exciting blend.

It’s got no “wow” factor to it, but it also doesn’t have anything terribly wrong with it. It’s quite tart without sugar of course, but you could have guessed that just from the name. Citrus, right? Turns out this blend actually has both grapefruit and hibiscus, which just has to be sour overkill. Not a good one to drink if you like unsweetened tea…unless, I guess, you’re a big fan of either grapefruit or hibby.

With a small bit of sugar I’m finding it pleasant enough to drink…a calmer, citrus-themed morning tea is how I’m thinking of it, and I’m having it with toast and eggs. (I’ve been trying to review these apart from meals so that there’s no taste interference; but that’s not possibly lately with my hours since I’m only ever home long enough to eat and sleep, so feel free to bear in mind that I’ve had egg in my mouth.)

I think it’s mostly the grapefruit that puts me off this one. I truly dislike grapefruit, but at least it’s not the strongest note here.

Unfortunately, I’d have to say that this one strikes me as having a “flavour hole” in the middle of it, much like DAVIDsTEA’s entire spring collection (for those of you who tried and remembered the way that collection oddly lacked). I think it’s just too one-note, really.

when I steeped this tea is straight/ by itself, the color really surprised me. It was a deep purple-pink, and I was expecting something more like yellow-orange. As for the taste, it has a very strong natural orange flavor (as opposed to an artificial orange flavor, which I’m really not a fan of). There is also possibly a slight note of other citrus fruits like grapefruit or something like that. The oolong leaves act as a fantastic base for this tea because its flavor is subtle, bringing out the citrus flavors.

I made a batch of this on a hot day and tried it both iced and hot. I much preferred it iced with no sweetener. I tried different steeping times and it had much more punch and flavor with a much longer than prescribed steeping time — toward 5 minutes or more. The predominant flavor for me is orange with other herbs and the tea taking a back seat. Its very lovely and fresh tasting. I also noticed you could do quite a few steeps.

So, I live in/rent out a basement suite – obviously there are stairs, right? Well in the year+ I’ve lived here we haven’t actually had railings. Not a big deal or anything, but they just didn’t exist. I’m quite sure about this because I remember when my Grandma came to visit she had a really, really hard time getting downstairs without something to grip.

I just walked out of the living room into the hall space that links to the bathroom and laundry room and our stairwell and… Railing! When did that get there!? When Tre gets home tomorrow I’m gonna have to ask if it was there when he left for Regina last week. I can’t imagine myself to be so unobservant to have gone a whole week without seeing it. Maye our landlord put it up Friday/Saturday when I was seriously out of it ‘cause of weird work hours? But even then, wouldn’t I have noticed leaving for work today or getting home?

Thank you TheLastDodo from the sample – this is a Teavana blend I haven’t tried yet, and while I know Teavana isn’t wildly popular here on Steepster I’ve had a few successes with their blends. Plus, where I live it’s actually really hard to acquire their tea so it was exciting receiving this one.

Dodo recommended trying this one cold brewed, and I was more than happy to oblige! I had the first half of it today at work, and I’m just finishing off the second half now. The plan was the drink it right when I got home, but then I got distracted by baking and had a beer with supper instead of tea.

Dry this smells pretty orange-y with not much else other than perhaps a faint but generic floral quality. One could almost say it’s the faint, natural floral tone of a fresh orange though, and nothing else.

Taste wise it’s a little bit underwhelming, not gonna lie. First flavour is an unsweetened but arguably very realistic orange note. It actually reminds me a lot of most Blood Orange teas I’ve had. It’s accompanied by a less overwhelming but kind of bitter grapefruit flavour. And then, there’s also a hibiscus edge to it – and it’s not all that pleasant, though tolerable at least. It reminds me a bit of the oddly beet like flavour the hibiscus took on for me in DAVIDsTEA’s Queen of Tarts blend. Bleck. It’s definitely not as strong though.

Once the orange and hibiscus welcoming committee leaves, the flavour transitions into something a lot more floral; but rather a generic floral tone and less so anything specific. The oolong base is kinda weak when compared to the flavourings used here – but it’s obvious floral too, and I’d say greener with maybe some mineral notes? Finally, call me really crazy here but I’m also tasting the faint licorice flavour of fennel!?

I just read all the reviews – no one else has mentioned fennel, anise or licorice so I’m just gonna chock it up to possible scent contamination? I really do taste it though.

If I were to drink this again, it’d likely be with waffles or some other kind of breakfast food – but I think to be anything other than average at best this blend really needs sugar, and as someone who doesn’t sweeten their tea that means I’ve just lost all interest in having it again. That’s perhaps harsh considering this isn’t bad; it’s just not good either, and if it needs sugar to be good then it’s not worth more of my time.

Sorry TheLastDodo – I loved getting to try this, but it’s not one I love. Perhaps that’s for the best; like I mentioned at the start of this review it’s hard to access Teavana blends where I live.

Que sera, sera. I sometimes get an anise note to it. heh, I rarely drink this as anything more than an addition to smoothies!

Another of my Tea of the Month picks.

I actually really like this one. I’m quite visual when it comes to tea, so the peachy pink colour of this tea in my clear mug makes me very happy. The oolong itself doesn’t blow me away, but this tea sits nicely in what I’d consider my fruity tea niche. It’s got an obvious floral and citrus taste to it without being overwhelmingly tart. It’s also subtle enough to bring out the oolong base. I think it’s pretty well balanced. Maybe the reason I don’t find this either tart or bitter the way some others have is because I tend to use a relatively short steep time.

Whatever the reason, I do enjoy it and will miss it when it’s gone. It might not be an all-time favourite that I’d consider essential enough to restock before my big move in April, but I definitely enjoy this one enough to drink it all day while I try to not bore myself to death with studying.

I like to think of this tea as my guilty pleasure tea.
To modify that old Animal Farm quote, i’d like to say that all tea is created equal, but some are more equal than others. Rag on Teavana all I want, they can sometimes spit out a pretty good tea.
The base oolong they use for this tea smells wonderfully floral and honeydew-ish in it’s own right. Adding pieces of apple, orange and hibiscus actually accentuate the flavor of the tea, rather than cover up, as many other flavored teas that I have tried.

This tea has a very bright, slightly sour citrus taste with just a bit of a floral flavor to it as well. It becomes quite bitter if you over-steep it. Personally, I prefer my citrus teas to have a strong second flavor to balance out the citrus and keep it from becoming overpowering, so this one wasn’t my favorite.

This is a great iced tea! I enjoy it hot as well, but I think the sourness and tang from the orange really lends it to being a particularly refreshing iced tea in the summertime. It isn’t so special I would buy it full price, but if it were on sale I would repurchase.

I picked this tea up on a whim, and I’m glad I did! It smells wonderful. It reminds me of blood orange tea, and when steeped, the water in my tea cup turns bright pink! No sugar or sweetener needed. Haven’t tried it iced yet.