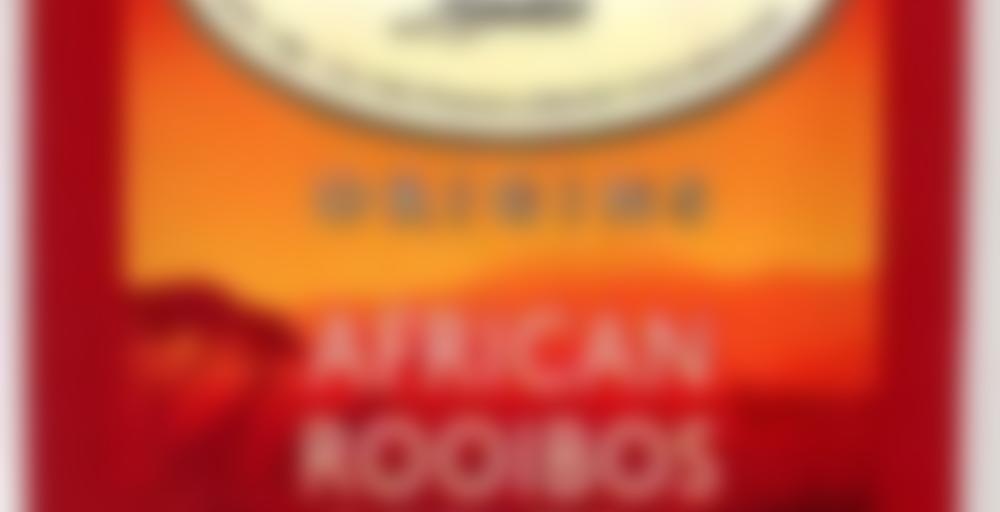 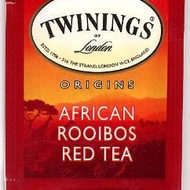 Great all-around bagged tea for everyday bagged drinkers or even for loose drinkers. The tea has a distinct taste that only you can interpret, and definitely a great alternative to straight loose drinkers.

The African Rooibos is great for the midday or afternoon. The tea also softens up a touch when just a pinch of milk is added, but it’s all for your preference. Also, the bag is made of some silky material which takes a lot of the baggy taste out of the ordinary cup.

Overall, great tea for any time of day, and great for people just starting to get in to bagged tea, or tea in general.

Hmmmm. I am drinking this to say I drank it. Anyone else do that? This was actually sent to me by a friend who, I THINK, likes it, but rooibos and I have an uneasy relationship. Some kinds taste like straight Robitussin to me. The weird thing is that when I sniffed this one I smelled cherry cough syrup but as I got closer it smelled like….cheap gravy mix – the kind that gives me heartburn, but mixed with cough syrup. Needless to say, I wasn’t looking forward to the sip.

But the sip wasn’t as awful as I thought it would be. Sure, it is mostly Robitussin but there is an earthiness here. Maybe that is the gravy mix smell. Twinings really does do a great job on their bagged, grocery store price range teas. I can see this being soothing and comforting to a really sore throat. I can see that many would develop a taste, even a passion, for this, just as many people love puerh and many others hate it. If it had seem health benefit that I was not getting elsewhere, I could drink it and probably grow to like it a lot. But for now, I prefer to stick with mostly camellia sinensis!

Straight rooibos reminds me of the straw on the ground in a horse barn. That’s still more appealing to me than Robitussin. At least you got to mark it off your list.

This tea is unremarkable, and muddy in flavor and texture. I added 2 lumps sugar and a splash of milk, which just muddied it more. It was drinkable, but not one I plan to repeat. It actually made me appreciate the Red & White fusion from Stash that I logged the other day much more – that was clean, brisk, and velvety by comparison. The Twinings cup just made me wish I was drinking the Stash again instead!

For a “tea” that’s not really a tea at all, it wasn’t half bad. That said, I can’t honestly say that it was half good either :) Kind of unremarkable and not particularly noteworthy. It did have an absolutely beautiful color, but I personally think that’s it’s most endearing characteristic. I tried it first without any sweetener, then added 1 Splenda to a mug and decided one was not enough — so I added a second Splenda, and this made it almost too sweet and syrupy. (It is just a tiny bit sweet even without any sweetener added.) I can definitely taste that earthiness and woodiness that people talk about with Rooibos. Which is not really a surprise, given that it’s made from a bush.

Anyway, once I over-sweetened it, I experimented a bit to see if I could make it more palatable. I added milk to some of it, and found that it was decent with milk but again, not particularly remarkable. Then I added a single Tetley British Blend Decaf teabag to the remaining cup, and found that (for me anyway) that added some true tea flavor to the cup, and gave it a little bit of tannin that I think I had been missing with just the straight Rooibos. So maybe that will be my occasional evening blend — a bag of Rooibos + a bag of Tetley decaf plus one or two Splenda (no milk).

On the other hand, I honestly think if I’m looking to cut down on evening caffeine that I might prefer a Twining’s decaf of some sort, or even a Tetley British Blend Decaf, even though that tea is not especially remarkable, either. But at least the Tetley decaf is actually a tea, as opposed to an “herbal tea” like the Rooibos.

I have had a couple of samples of Rooibos from other sources in the past, and I thought this one was pretty decent. Very surprised by the reviews that some people have written, though, claiming that this tea is “100 points” or “the best bagged tea out there.” Hardly. It’s not really a tea anyway, as I mentioned in the first line of this review, and it just doesn’t stand out as anything all that spectacular. I guess if I had to sum it up in a couple of words, I’d say “serviceable, and caffeine free. But not noteworthy.”

Eh, it’s okay for a straight rooibos. It has that earthy, dry smell and feel in the throat. Umremarkable. I’d drink it again, but wouldn’t buy it.

I had “red tea” when I was in high school and never knew what tea leaves where used to make it. The red tea was sweet and had a mellow flavor that was slightly nutty. I like it better than many of the black teas and green teas I had had at that point. Years later, I discovered that the red tea was rooibos, a tea made from the leaves of a bushes native to South Africa.

I was fortunate enough to spend time in Cape Town, South Africa, where I began a love affair with rooibos tea. I had it several ways, but my favorite was Rooibos tea with a small amount of raw sugar. When I returned to the US, I needed to find rooibos tea. I came across Twinings African Rooibos tea.

While the African Rooibos possesses the mild sweetness and nuttiness, it is not as strong as I have had in other rooibos teas I have had. If you have not had rooibos, I think this tea is a good starting point to determine if you like the taste.

Sweet without even adding sugar or honey.

I saw this on the shelf a while back while I was traveling and since it was something I couldn’t find where I was living at the time I brought it home with me. It’s hard to rate this tea because after trying other rooibos teas I’ve decided that I just don’t care for them. It isn’t bad, it isn’t my favorite of the rooibos that I’ve tried, but I just can’t drink this on a regular basis.

My first Rooibos and these bags are very flavorful, different from traditional Camellia sinensis or other tisanes. A very rich flavor and hard to describe, I suppose it is what a “red bush” leaf would taste like. The color is a gorgeous deep red.