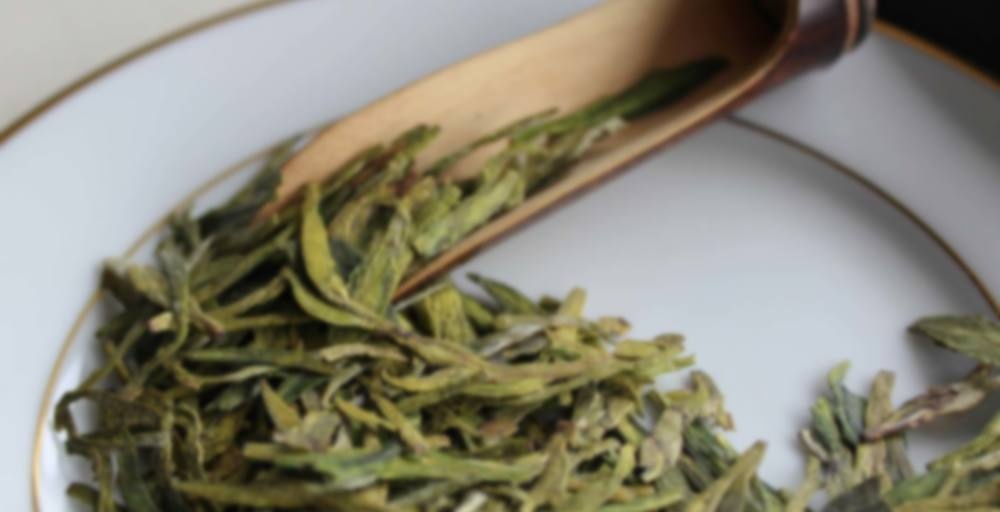 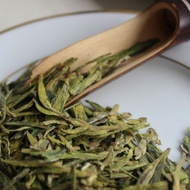 Mrs. Li is one of the warmest and kindest people we know in China. Her father was one of the foremost professional tasters in all of Zhejiang, responsible for officially grading Dragonwell. She has studied picking tea, processing tea and tasting tea with her father since she was a child.

The aroma of the fresh leaves is rich and full, like flaky pastry right out of the oven, tempered with sweet vegetal undertones. Because this limited harvest has more bud material than our traditional Dragonwell offering from Mrs. Li, it is lighter on the vegetal notes and stronger on full bodied texture and aftertaste sensation. Early harvest tea like this are a quiet and meditative tasting experience.

The first steeping is full of semolina, sea salt and buttered watercress flavor. The down from the buds creates a full and commanding mouthfeel. The texture is smooth and silky, but expands to fill the palate. The sweet aftertaste is dominated by the traditional minerality that we have come to love in Dragonwell.

There is a thrilling sensation on the palate after several steepings, a tingling and almost electrical feeling that comes from this lovely Spring tea. The aromatics continue to grow towards jasmine and lychee, tempered by a creamy matcha vegetal quality.

Mostly high quality small, lighter-colored leaves, but not the most uniform in size, shape, or color. It’s not bad, by any means, but not the highest quality Longjing/Dragonwell.

Not many people know, but the varietal used in Laoshan is the same as what is grown in Longjing. The Laoshan tea plants were actually imported from the West lake area. So, other than territorial growing differences, such as, climate and soil, they’re basically the same thing.

Inhaling long, deep breaths of the dry leaf aroma has transported me to heaven. I’m so glad I bought samples of both Mrs. Li’s Dragonwells! To avoid confusion, I’m going to call this one “Early Spring” and the other “Shi Feng” (even though they both have Shi Feng in the name; only one has Early Spring!). I was expecting them to taste basically the same. In fact, I was expecting to have difficulty tasting a difference. But wow, these are so different!

I thought the Shi Feng one was actually a tad bitter. I didn’t put that in my review because I assumed I messed up the brewing parameters somehow since it was my first gaiwan experience. But now I think it may have been a little bit of the tea’s fault too. That tea was good, much greener and clean tasting. This one is creamy, buttery, and luscious! I much prefer this Early Spring version!

They both definitely have watercress notes, but Verdant Tea hit the nail on the head describing the Shi Feng as silky and the Early Spring as creamy. Oh yes, creamy!!! And buttery!! Oh, so good! Nom nom nom!

So I didn’t read the directions properly and started this at 10 second infusions instead of 4 seconds. The first two infusions were definitely the best. I felt the tea lost flavor surprisingly quickly in later infusions, but this could be due to those longer early steeps. I tried to compensate by doing longer later infusions and that’s when the Early Spring got a tad bitter. But that’s the first time any bitterness could be detected, and I’m 100% sure it’s because I oversteeped the leaves. As soon as I decreased the infusion time again, all traces of bitterness vanished.

Wow, I am so loving Long Jing!! It’s hard to believe there was a time when I drank a cup of Dragonwell and thought, “Yuck!” This is not yuck. This is pure decadence in a cup. I read through Verdant’s description of this one again and I found where it recommends eating the leaves after the tea is steeped out. I would not have thought of doing that!! I popped a bud in my mouth and sure enough, Verdant didn’t lead me astray. It is sweet and tender and delicious! OMG, I think I found a new love. My husband may have to share me because I want to marry this tea. AAHHHH!!! So good! I love this tea!!!!