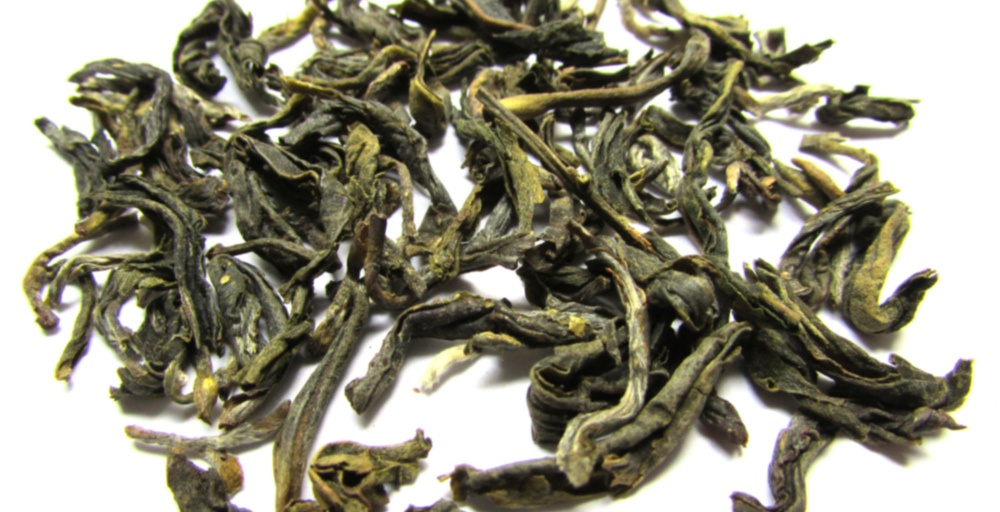 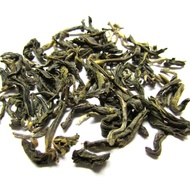 Vietnamese teas, you rock. Unique, memorable, and often delicious, every Vietnamese tea I’ve tasted has been a charmer. And this one’s exotic name made me smile before we even met.

What-Cha sources this tea through the Vietnamese wholesaler Hatvala, who with a few creative leaps christened it “Tiger Monkey.” In Hatvala’s own words: “Most of the tea produced is sold at the colourful local market which is held on the Monkey and Tiger days of the Lunar week from where our name for this tea derives.” I’m somewhat familiar with the lunar calendar, which from what I can tell makes a whole lot more sense than our Gregorian calendar. I found some information about a lunar week – which varies from six to eight days – but could uncover no reference at all to Monkey or Tiger days in this context. I’ll keep looking. The “Wild” part of the name was apparently added by What-Cha, which I find super fun as a preface to “Tiger Monkey” and at the same time most appropriate and informative, since the leaves are from wild trees.

“Like other wild green teas it is naturally sweet with little bitterness,” states Hatvala’s Tiger Monkey sales sheet. Which makes me wonder about tea made from “wild” (or at least abandoned) trees as compared to more recently cultivated and tended tea gardens. Surely there could be differences, and perhaps even differences that are consistent, such as wild green teas tending to be sweeter, per Hatvala’s nonchalant claim. Though I could also imagine the opposite, or that inclusion of the “wild” adjective is somewhere between description and marketing. I’d be curious to hear what others have to say, but in the end, what matters is what’s in the cup.

I do notice some sweetness in the dry leaf, sweetness that is intertwined with smokiness. Both characteristics are fairly light in the dry leaf and all the more subtle in the cup; during my first session I didn’t notice smoke at all. It’s there, but nothing like the smokiness of, say, a Russian Country blend. As a green tea the overall flavor and body is on the light side of the spectrum, but deeper than the bright, fresh-picked grassiness of, say, Fish Hook. Here and there I noted some enjoyable creaminess to the body, and a bit of the wood and nut notes others have mentioned.

When brewed at What-Cha’s parameters (1-2tsp, 80C/176F, 45-60sec) there wasn’t any of what I’d consider bitterness or astringency. During my second session I experienced a dryness at the back of the throat which I enjoyed so much that I resteeped probably eight times. I had that soft astringency in mind during my third and final sessions, but within the 60sec steeps, it was nowhere to be found. “No man steps in the same river twice, for it is not the same river and he is not the same man.” I love that expression of life’s ever changing nature, and I love that tea illustrates it so readily. What was that astringency? Was I imagining it? Was it my own body’s particular chemistry on that evening? Whatever it was, it was of that moment. In the later two sessions I didn’t experience anything close until I increased the steep time to two and then three minutes, which yielded the slightest bitterness but still really no astringency to speak of.

“Typically, the Vietnamese prefer to brew their tea very strong and bitter and like to appreciate the sweetness in the after-taste experienced once the initial bitterness has subsided,” says Hatvala. Still curious, I upped the temperature to 195F; even after a 3min steep the tea remained mellow and enjoyable.

I also found it interesting that this tea is grown at a 1500m altitude. It’s 1200m above Hatvala’s Fish Hook and high enough to be considered high mountain, by many standards.

This was a 10g sample that Alistair included with a What-Cha order. Like many teas that I’ve received as samples and in trades, this was an awesome surprise that may have taken me awhile to get to on my own. That’s the end of the sample, but certainly not the end of my love of Vietnamese tea.

I didn’t get a whole lot of smokiness from this tea. Maybe a bit, but it wasn’t anywhere near overwhelming. Mostly I got sometimes sweet woody flavors during my session with this one. The body was not particularly strong, but that was alright. Very little bitterness but a bit of mouth-drying once I got to some longer steeps, nothing too unpleasant. Beautiful large and vibrant green leaves after steeping. The dry leaves look correspondingly burly. I’ve been consistently impressed by almost all the Vietnamese teas I’ve had from What-Cha and this one isn’t an exception.

It is pretty bizarre to think that 15 years ago, half my lifetime ago today, I left my home in Georgia and never went back. It is a sad story that I have mentioned off and on before and see no need to rehash it, but wow, time is a crazy thing! Hard to believe that it has been exactly half my life since I lived in Atlanta in my house on the edge of the forest…that forest is now long gone, replaced by an apartment complex…sad since it was a sanctuary to a lot of wildlife. I find myself feeling wistful and dwelling on memories, they do not feel as heavy as they once did, mainly I just find myself in awe of the perpetual movement of time.

Time for the weekly tradition of looking at a tea from What-Cha, that most dangerous event of visiting the website, looks like I have more teas to add to my wishlist! It is always fun trying to decide what tea I am going to ramble about each week…something new to me or something from the older pages of my notebook pile? Today comes from the notebook pile, Vietnam Wild ‘Tiger Monkey’ Green Tea a Green Tea from Lao Cai Province in Vietnam. Sourced by Hatvala, whose mission it is to spread the word about the yumminess that is Vietnamese teas, something I can get behind. The more I try teas from Vietnam the more I find them becoming a favorite. I do not know why it is called Tiger Monkey, but I do know it is processed by Black H’Mong families who have the trees growing around their homes, neat! The aroma of the curly green leaves smells like the lovechild of a Sheng and a Dragonwell, notes of chestnut and green bean, asparagus and camphor, sea air and smoke blend together for a nutty, cooling, green sniffing experience. It is not a mellow tea, it is brisk and sharp, yet with a very clean aroma profile to it.

Into my green tea pot the tea goes, so glad I picked this bright red clay because man does it make green teas pop! The aroma of the wet leaves is a bit more vegetal, stronger notes of green beans and asparagus mix with a bit of lettuce for a crispness. Alongside the green is gentle smoke, camphor, and a tiny bit of sea air at the finish. The liquid is delicate, sesame seed nuttiness, green beans, and a delicate sea air note. I admit to loving teas with sea air notes, they remind me of frolicking in the ocean at Bar Harbor, frigid water but so refreshing!

Ah, that is a brisk green! The earlier comparison to a Sheng is not far off, strong camphor notes and a gentle woody bitterness give way to green beans and sesame seeds. The finish is mellow smoke and gentle sea air, and for all that it is a brisk start it is also mellow and refreshing.

Second steeping, honestly I did not notice much change. The taste is a bit more brisk and bitter, a dry camphor bitterness that is like chewing on cedar wood, this gives way abruptly to green vegetal notes and sweet nutty ones that linger for a while, blending with the cool mouthfeel. I went for another steep but I swear someone trolled me and it was the same cup that time traveled. Sometimes teas do not find the need to evolve much in their steeping, and you know, that is alright.

For blog and photos: http://ramblingbutterflythoughts.blogspot.com/2015/11/what-cha-vietnam-wild-tiger-monkey.html

Dry Leaves: Another wild growing tea, this time it doesn’t remind me so much of Korean greens; they look a little more Chinese-y then the Five Penny, but I can’t think of any particular style that they remind me of. They had a very nutty and smoky scent.

Temperature: 176oF
Brewing Time: Two Minutes
Aroma: Smoke, Nutty and Wood
Flavor: Smoke, Nutty, Wood, and Vegetal
Tasting Notes: Again I started out brewing following the suggested times, and then started over with new leaves and cut the brewing time in half. This had a very pleasant wood taste, but it was slightly smokier although the nutty and smoke tastes did linger, but the nutty lingered a little longer.

For $8 for 50g, it isn’t a bad deal I generally like nutty teas, and this is no exception, my only problem with recommending this tea or any of the others is that I don’t know a lot of green tea drinkers who like smoky teas. Although like the other two teas it starts to lose it smoky edge in later infusions.

I really tried to do a serious review of this one today. I already was frustrated and had a headache from dealing with govt bureaucracy. Safety tip – don’t ever lose access to the email address you login with because you become trapped in an alternate reality without it. There is no option to change your email without your email – what? Exactly.

So then I prepare this tea, needing its healing superpowers. Unfortunately (and happily), my grown son pops in and starts going through my stash. I offer him some but he takes a sip and says not bad for green tea and then returns to asking, ’What’s this?’ to everything he picks up. During his constant chatter, my wife pops in and starts her own chatter about the mail, or a sewing project, or maybe how I don’t listen. I’m not really sure, as there were too many words in the room. Yeah, the headache is not going away :)

I’ll try again tomorrow. What I can say is I think this is the same basic type Vietnam tea that I love scented with lotus blossoms. Side by side they looked identical. Of course this one is an unscented tea. The flavor is very mellow, lightly vegetal, slightly sweet, with a hint of smoke. Pretty sure I really like it. Tune in tomorrow, same bat time, same bat channel.

I grabbed this tea because it’s getting ready to snow here and I wanted something warm, dark, and woody. (Alas, I’m out of puer tea or I would have turned to that.)

The aroma and taste are slightly smoky and woody with almost a hint of smoked salmon. It’s not at all bright or grassy. It reminds me a bit of a gunpowder.