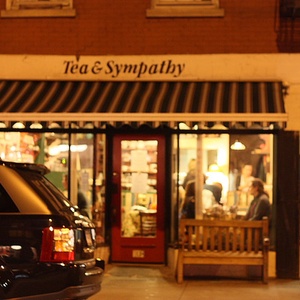 Please note: this is a review for a visit I made to this place a few years ago. It was before I started getting into tea and sadly I haven’t been back since. I went with two of my girlfriends and we had the full afternoon tea. It was wonderful. I had never drank loose tea before, let alone use a teapot and strainer, so it was an experience for me. I wish I remember what tea I drank. The scones, cakes, and finger sandwiches were delicious. I was introduced to clotted cream, Branson’s Pickle, and cucumber sandwiches. The downside was the wait time for a table – they don’t take reservations (or they didn’t then). And it’s not very big so it was a tight squeeze, even though we were only three people. Overall it was a great experience and I must find an excuse to go back.

This is a cute little (and by little I mean tiny. They probably can’t seat more than 20 people) cafe. The tea is a little expensive per pot but it was good. I got the Assam and it came in probably a 24-32 ounce pot. They brought milk to the table with it. I figured I might need it by the end of the pot since the leaves were left in, but even after 30 minutes, it was only just getting to be bitter. Far from undrinkable and I didn’t need to use the milk. :) The food was… well… British. If you like British food, you’ll love this place. If not, you’ll likely find it bland and expensive. They do have a $12.50 minimum purchase though the cream tea costs $12.50 so you could go get tea and scone (don’t remember what else was with it) and not have to get anything else. I did not have a scone. I was pushing it already to make my husband eat at yet another tea place on this trip! :) I will be back someday with another foodie/tea person and we’ll do it up right. For now, it was enough to have tried this place out, know where it is and how things work. The shop next door does sell Brit products. I remember seeing PG Tips and maybe Typhoo, but not sure I saw any loose tea. They have adorable teapots but very expensive.

This place was adorable. I loved the English Breakfast with cream and sugar. It has more of a restaurant than a cafe vibe and was really busy when we went. It’s a really fun place to have brunch with a friend or two. It’s like a lively, British tea party crammed inside a cute pantry. They also sell British snacks, candies and teawares in the adjoining room next door.

I visited Tea & Sympathy on a visit to NYC and was very pleased. It is a small shop, but that just makes the setting quaint and intimate. My boyfriend and I were seated by the window, which was the perfect seat to people-watch and take in the great atmosphere of Greenwich Village. The scones were perfection and my boyfriend enjoyed a bowl of stew. We both ordered pots of tea and I love that each of our pots were different. There were rules posted on the door about not lingering, but that’s understandable considering the smallness of the shop. Our waitress was very pleasant and never rushed us. The little store next door offered a selection of all kinds of fun things from food to tea to teawares. This is a must-visit shop if you are in NYC and are looking for a delicious tea meal!

I decided to have dinner at Dinner at Tea & Sympathy around 9 pm on Saturday.

There is a list of rules on the door, funny enough that Nicky spells her name the same way.

The wait staffs were two girls, one Irish, not sure the other one’s accent but it sounded UK/Ireland.

Overall it’s a tiny place, but when I arrived it was almost full, but no wait.

They discourage lingering, but are pleasant, helpful, and it seems (I have never visited England) like a shop you could find abroad.

I had the soup of the day, squash soup, with a lapsing souchong.

The soup was spicy but nice. It wasn’t heavy and I was glad for that on a hot night.

The Lapsang Souchong was prepared as loose leaf in a postman teapot. They provided a cup strainer to keep leaves out of your cup while pouring.

They failed to mention how long, or that they had not steeped the tea yet. I let it set two more minutes as it was very pale. I think it could have used another minute.

The unfortunate part of the large pot and small teacup was that my first cup was weak, my second cup was perfect, and the third cup was over steeped as there is no way to stop the steeping process other than to drink faster.

Although there is a no lingering policy I never felt rushed, and the girls knew their product.

Sadly I failed to get photos of the outside or inside. The inside walls are decorated with pictures of royalty, and other random British memorabilia. Behind the counter there are many, many different teapots and teacups, which do seem to get used. I wonder if even the ones on the top shelves near the ceiling get used when it gets very busy.

The bathroom was next to the kitchen and was tiny. The door stuck, so at first I thought it was occupied, the staff saw me look dejected and pointed out I just needed to pull harder.

Overall the place was clean, the food was good, the quality of the tea was good, and the staff was very pleasant and helpful. My only complaint is the need to monitor your own tea after it arrives at an unknown steep time. I would recommend stopping by – the people near me were enjoying mushroom pie, scones and clotted cream, and other delicious looking items.

My meal came to $16 including tip.

Next door is the store, Carry on Tea & Sympathy’s, it is small. The store makes excellent use of their space to offer a large selection of teas and china. They also offer to go service for those not wanting to sit for a meal.

Next to the store is an unrelated fish and chips store, making that stretch of street very British.

. Grounded
no ratings yet
0 ratings