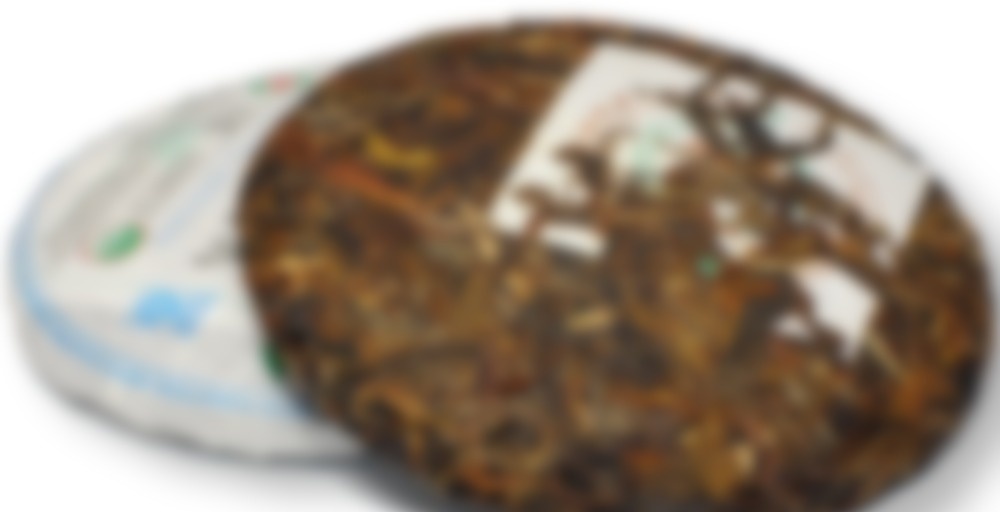 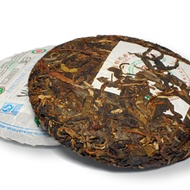 This one comes camping with me so needless to say I trust it. It’s hearty enough to stand up to a nearby campfire and easy enough to contribute to the mood without being conspicuous in any way. Nice hints of wild Dan Con sweetness and spice on the back end and in the hui gan. A great introductory sheng beeng.

See how in the picture, there is a piece of paper on the cake, and tea is over it? This made things more difficult than they needed to be.

The cake was packed really tightly and I found it very hard to loosen any part of it. So I went for the little indentation in the middle, and managed to break on through to the other side, but the result was I hit the paper without realizing it. So there were little bits of paper among the tea.

Also, the tea was pretty dusty because I am sure I broke some of the leaves trying to pry it apart.

Any suggestions on how to do better next time?

Somehow I managed to pry enough off to get about 2.7g of tea. I got most of the paper out before I rinsed, and another couple of bits out after. But I suspect there was still some in there…

Because of the dust, the liquor was cloudier than I’d ever seen with a sheng. It was the color of a lemon cough drop in the first few steeps. Later, it became gold, with a copper tinge and clearer.

I didn’t notice much change from steep to steep. For the most part, I got that buttery, white chocolate aroma and flavor that I have discovered is pretty standard for me and sheng.

Around steep 4, something happened though. The tea got sweeter, and also seemed to be more vibrant in flavor.

And around steep 6, it developed a crispness and a brightness I hadn’t observed before.

I liked it quite a lot, though I am not sure it’s the best I’ve had so far.

For some reason, this is inspiring me to pull out some of my puerh and try it tonight… hopefully paperless, though. Haha.

Try going in from the side in two spots – in kind of a triangle. Then use the knife to pry in the middle of the two spots. Hopefully that should loosen a chunk, without too much dust. ;)

Great, thanks! I’ll try it!