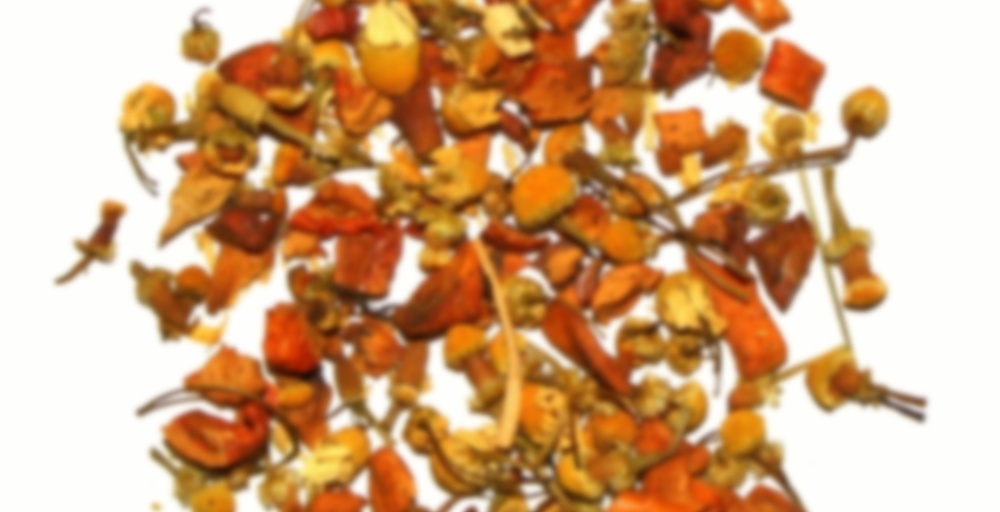 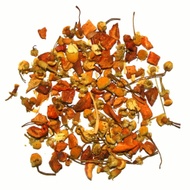 When it’s time to relax, settle in and indulge yourself in our delicious blend of chamomile blossoms, apple bits and real cinnamon.
Ingredients: Egyptian chamomile, apple bits, cinnamon

I don’t really like chamomile, but I’m polishing this one off from my touch of herb try me pack. The taste of apple is lovely crisp and sweet, and if it weren’t for the chamomile I’d like this one much more. It’s not bad, I’m glad I had the chance to try it, but it’s just not for me.

This came from the herbal try me pack I ordered awhile back, I wish I had tried it sooner because it is officially the closest replacement I’ve found for my favorite tea bags that were discontinued. I’ll have to do a side by side comparision with my last remaining bags, just to be sure.
I’ve been a fan of apple chamomile tea for a long time and this is a great mix of both. Neither ingredient shines brighter than the other, they just kinda blend together with a little kick from the cinnamon. The flavor was a little lighter than I wanted, even at a 5 minute steep. That of course is easily remedied with a little extra leaf.

Meh. This blend was good, but not great. The apple was good, but the rest just kind of faded into the background. I got this in a try me pack and this is one of the few I don’t think I’ll be ordering more of. Thank goodness, because I seem to have fallen in love with almost every blend I’ve tried so far >.<

Boiling 3 min, 0 sec
Yours I Like This
7 likes
0 comments
Edit

Once upon a time, I got a bajillion Della Terra samples from Janelle, I believe. Most were herbals, and though I had requested them, due to a general dislike of such teas, I really didn’t try very many. However, my MIL prefers caffeine-free teas, so it was perfect when I located the bag! Which, curiously, smells overwhelmingly of honey flavouring that is used by many companies (not an objectionable smell at all, when we think of the possibilities that herbal teas could bring).

This tea seemed pretty straightforward – apple chunks, some spice, and chamomile. Flavour is just what you’d expect, and surprisingly, I thought it was okay. It’s not too strongly-flavoured, and the chamomile is more present than I’d like, but it made for a nice evening cup the other day. Of course, my MIL also enjoyed it, so I’ll be leaving the rest for her while I focus on other teas that I like more.

Swap from Cameron B.

Great aroma, reminds me of cider donuts. I love the smell of this apple/cinnamon. Then it gets weird. When the tea is piping hot, it tastes like hot apple cider. But when it cools down just a bit it becomes weaker. Then the apple/cinnamon flavor bounces back in the aftertaste. This is basically chamomile tea with something a little extra.

This was one super bitter for me for some reason… :(

The chamomile is really overshadowed by the apple flavor, and slightly sweetened it tasted a lot like hot apple cider. I am kind of down with that.

50
Not Recommended
Cameron B.
3311 tasting notes

I’ve had this for a while now and haven’t written a note on it yet. I’ve actually made it twice before, but both times I came out weirdly bitter so I figured I’d give it a couple more tries before rating it. It’s a mixture of chamomile flowers, cinnamon bark, and pieces of dried apple with peel. It smells very strongly of apple and only lightly of spice. I steeped it for 5 minutes.

The aroma is nice. I get a lot more cinnamon than in the dry leaf, then chamomile and the sweetness from the apple. Unfortunately, I got the same odd bitterness this time as I have before. I can only assume it’s from leaving the peel on the apple pieces, although no one else has mentioned this in their notes so… I’m not sure what’s going on there. It makes it hard to drink, even with sugar added. So disappointed… :(

I have to say… I am amazed by the box that arrived at my house today. It was packed full of samples of every kind! I have so many teas to try. The first part of my choosing process was to go through and make two piles: Not right now, and OMG YES NOW PLEASE. I ended up with like a dozen NOW PLEASE so those will be my first several samples and I’ll try to get through them as soon as possible. There were a handful of samples I won’t need/want to try due to having tried them before or being an ingredient I must run from (a spicy ginger tea that i noted for example) but I really want to try most of these. I have identified the first tea to try however.

Apple Cinnamon w/Chamomile. I opened the bag and it smelled amazing.
Okay.. I smell delicious, ripe, vibrant apple, hints of cinnamon and perhaps a bit of other spices like I might find in apple pie, or maybe that’s my imagination… the buttery note of chamomile and some sweet, sweet aroma that I didn’t identify.

It smells so good. I brewed up some boiling water and steeped it for 10 minutes to get a strong flavor since it’s a herbal.

The first sip was full of bright flavor. I taste apples and a hint of the cinnamon. The tea is still too hot to drink readily, so I am not getting a full flavor yet. The apple cinnamon taste lingers long on the tongue.

As it cools a bit, the taste is a bit more sour and tangy than I expected. It’s missing a strong spice note despite the smell, but the hint is there. The chamomile is vaguely present, but I think the chamomile might have hidden itself due to the flowers crushing themselves in the bag (there was a lot of chamomile powder).

The sourness is stronger as it settles into a drinkable temperature. The nose is sour apple with a strong apple flavor following, hints of cinnamon and chamomile, and then a sour/tangy tail.

The touch of sugar I added was a nice idea. It may have been too sour without it.

I wish I could TASTE all the spice I SMELL when I drink this. There is a bit of it but not enough. It almost tempts me to drop a little cinnamon powder in it, despite my aversion to cinnamon. Haha…

Halfway through my cup, cooled to perfect “very warm” temperature, the taste remains the same. I have decided to add a french vanilla creamer to my tea to see how it is with that.

The French Vanilla creamer is a nice add. It calms the sour flavor down and brings out the apple nicely. With this change, the tea is much more palatable. I wish the sour flavor hadn’t been present because if this tea tasted just like it smelled I’d have had to order it right away.
I am afraid I’m going to have to keep this sample packet and replace it. I need to try it again with a shorter steep time to see if the sour doesn’t come out as much.
If that reduces the sour, I may have to buy this yet. If nothing else, it’s stellar with the cream and I love that it’s an apple tea that I can drink without caffeine. My favorite Apple tea (from Adagio, sadly discontinued) is a black tea so I can only have it early in the day.

Mmm. Vanilla creamer really rocks this tea. I’m going to enjoy the rest of my cup in peace as I feel I’ve said quite enough about it. :)

What a thorough review! I’m glad you’re enjoying the variety of the tea box. I was torn between keeping it like for shipping cost and including lots of sample for variety. I went with variety obviously. lol. I think there’s like 32 teas in there! Please make a note of how many teas are in there and the weight after you ship it out so we can keep track :)

I will be happy to. I’ll note how many were in there and how many go out (in case I include more) and the weight at shipping.

Btw, what did YOU think of this tea? Just curious.

You know, I never did try that one. A few of them I left alone because I figured someone else would enjoy them more. I don’t usually get in an Apple Cinnamon mood until around fall time :P

Haha. I love Apple tea any time of year. Cinnamon isn’t my favorite, but the APPLE part is DELICIOUS!

I liked this one but it’s not my favourite. The flavour of this isn’t very strong- I get a nice balance between the apple and chamomile, but I’m not tasting any cinnamon.