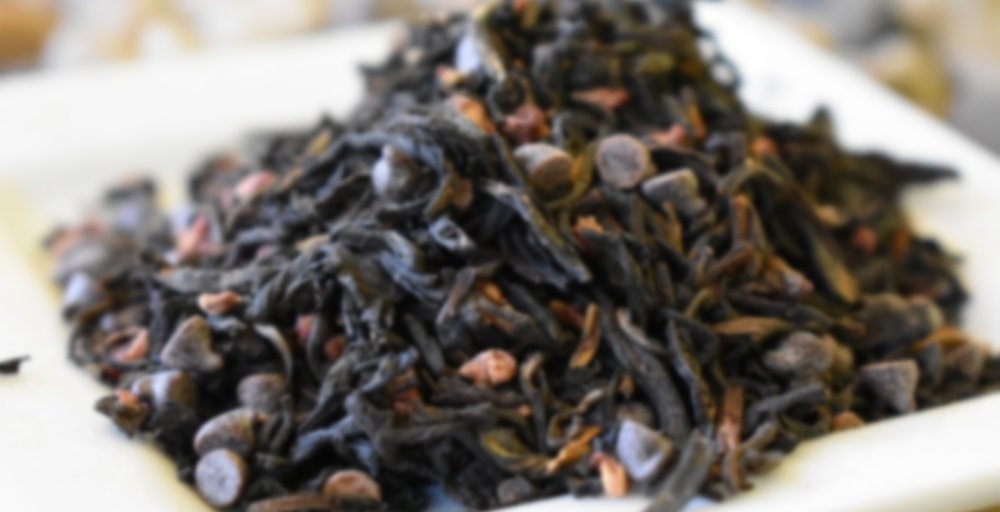 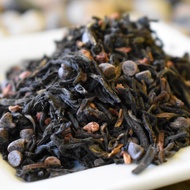 Fruity raspberry, black flowery Orange Pekoe tea, and chocolate… nothing could be more luscious! If you love rich chocolate, raspberry, truffle flavor, and premium tea, this one will make your mouth water. A great dark tea that can stand up to milk and sugar to made into a latte.

This one makes a good latte as I recall, too.

Trick or Treat! I bought this tea under the name “Dark Chocolate Raspberry” from Snake River Tea in Boise, and it’s been a little difficult for me to Nancy Drew out the wholesale source. After quite a bit of hunting, I’m driven to believe it is the “Chocolate Raspberry Truffle” blend by East Indies Coffee & Tea Company… though I’ll admit I’m not 100% sure here. The private label company “SpecialTea Company” carries it, with the exact same ingredient list as what I purchased from Snake River Tea, and their stock of teas seems to be entirely comprised of blends from the large wholesalers International Tea Importers and East Indies Coffee & Tea Company, and Snake River Tea also has a lot of ITI’s blends… leading me to believe that SpecialTea Company may be their wholesale source. The only thing that confuses me a bit is I’ve also found a different set of ingredients floating around for East Indies Coffee & Tea Company’s “Chocolate Raspberry Truffle” blend (it included only raspberry leaf and flavorings, while the tea I have does not have raspberry leaf and includes raspberry pieces and dark chocolate with the tea leaf). Perhaps the blend was updated or changed over the years, though? That is actually what I’m leaning towards given the evidence I’ve gathered, though it is possible there is another major wholesale source that this blend belongs to that I just haven’t uncovered yet. I have already checked all the other major culprits, though (Metropolitan, Dethlefsen & Balk…)

I really just wish tea shops would honestly list their sources instead of private labeling to begin with, buuuuuuut that isn’t how it works… * shifty eyes *

Anyway, the tea! The aroma of the leaf is amazing, and this is one of my older teas, purchased in May of 2017. Opening the bag just smells of really tart raspberries and bittersweet chocolate, and already has me salivating. I’m really surprised it has held up so well!

The brewed tea is a pretty coppery color, and does have a chocolate-raspberry aroma. The flavor is… fine, but a little disappointing compared to the amazing smell of the dry leaf, because there is something about the raspberry that is coming off a little too artificial? The tea is sweet but not overly so which is nice; there is a nice tart fruit note here rather than it being really sappy or syrupy. I’m just getting a slight metallic aftertaste on the raspberry, which I sometimes notice from certain artificial flavorings. There is also a slight citrus note to the aftertaste as well, which is likely from the base black tea, which is quite smooth, with very mild astringency left after the sip. The chocolate is a more subtle note, it’s more of a base flavor and a dark/bittersweet note rather than sweet/milky/creamy. Which I think compliments the raspberry nicely. Overall the flavor combination is a win for me, I just wish it didn’t have that odd slight metallic note I’m getting in the aftertaste.