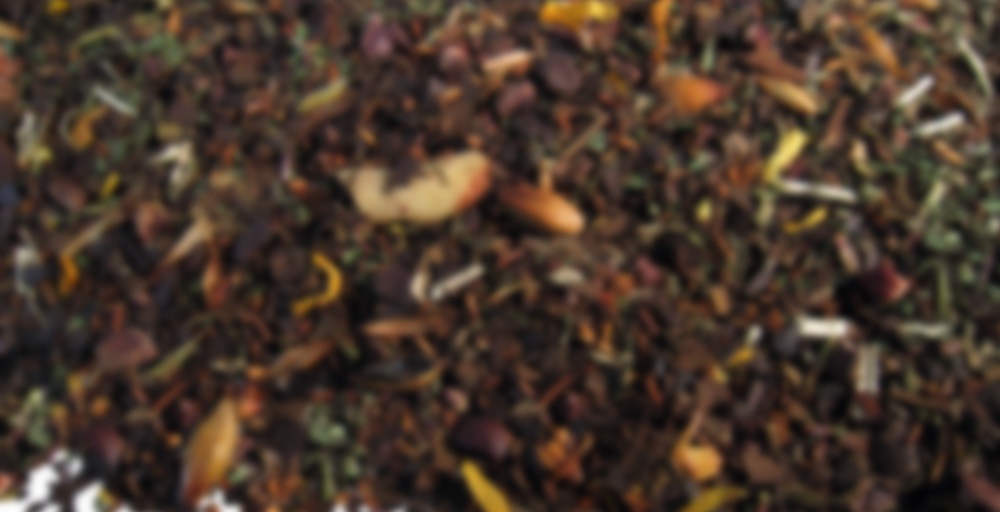 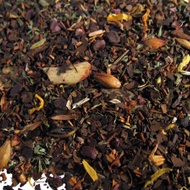 by Fusion Teas
83
You

Rich Argentinean roasted yerba mate is combined with spearmint to give it a sweet minty fresh touch to awaken your senses. Malted barley, organic Ecuadorian roasted cocoa beans, toasted rice and dark chocolate flakes create a thoroughly satisfying beverage that rivals any traditional cafe mocha. Perfect for those looking for a healthier alternative to coffee without sacrificing full, rich flavor.

I’m really not much of a mate drinker but I ordered some other things from Fusion Tea Room so I got a sample of this to try… I’m hoping it will taste like a frappuccino or something. :)

Steeped in usual mug method at around 190F for 7 minutes. The aroma of this is very coffee like and minty. After having the first sip I am picking up lots of spearmint and mate. There is a mocha flavor here but the mint is quite prominent. I did add some soymilk to this and liked it much better that way than I did plain. As a dessert drink this is pretty yummy but it definitely needed the creamy element for me.

I do worry about mate as they say drinking large amounts of it may cause cancer… but I will have no problems finishing off this yum-a-licious sample. I do miss coffee drinks so this is a great substitute.

Now I wish I had gotten more mate from them but I got some other neat stuff… stay tuned. ;-)

Amy, I am glad you enjoyed the sample and I wanted to correct the misconception many have about Yerba Mate and the possible cancer side effects. The traditional way to dry Yerba Mate is to smoke it. This adds carcinogens to the Mate which can cause cancer. Plus you would have to have ALOT day in and day out to make a difference. The actual leaf by itself has not ill effects and has tons of antioxidants. With that said we at the Fusion Tea Room do not have any Yerba Mate that has been smoked. So feel free to drink plenty of it :)

Awesome information, Fusion Teas! Thanks for sharing! I know I’m planning on writing about Yerba Mate sometime in the near future and this is some good information to start with. :)

I’ve done a bit of my own research and I am still skeptical. I think I’ll stick to the advice by the Mayo Clinic and others and consume it only occasionally. It was a very nice blend.

Everything in moderation is a very good way to live life. In my own research I tend to think the smoked mate is the colporate. Also the traditional way to drink it in a gourd at a high temperature and re-steeping it over and over can add to the cause. We recommend steeping our Mate at 180. As there is some questions raised about Yerba Mate we encourage everyone to do their own research and be comfortable in what they decide.

Yeah, from the stuff Missy read regarding Mate, it wasn’t the plant itself that was considered a cancer causing agent, but likely caused by the production facilities or the uber-hot temperatures that the locals drank the mate at. Which is something to worry about for tea drinkers and mate drinkers alike ;)

Side note – I think I want to try this tea. Fusion – I think it’s awesome that your website has a link to Steepster on it. Very brave move ;)

Makes me wary of other smoked teas-ie Lapsang Souchong.

I received this in a swap in the summer and I transferred it the a T-Sac and forgot all about it in my cubby at work. Then yesterday I woked up at 3:30am and couldn’t get back to sleep. . . at ALL! So when I dragged myself out of bed after tossing and turning at 5:30am to slowly get ready for the longest most annoying day in my twenty-something years of life. I knew once I got to work that I need to dig it out. At that point I didn’t even remember what it was called I just remembered I had a mate tea in my cubby. So I brewed it up after I looked at the leaves hoping that would give me a clue. It smelled fabulous and immediately I was like “this smells like mocha and mint!”
Then it had a toasty taste to it and I racked my brain before remembering that one was called Roasted Mocha Mint!
It was incredible and I wanted to savour it but my coworker spilled it. :( Now I know I need to order from Fusion Teas!

It feels like I’ve been enjoying loose-tea for forever, but there are times when I am reminded just how new I really am to the world of tea. Since December I’ve tried my first white tea, my first oolong tea, my first rooibos, my first pu-erh, and now it’s time for my first mate. Yes, this one is flavored, but it left me feeling very curious to try more mate blends because it was DELICIOUS. There are so many different layers of warm toastiness in this and that toastiness blends PERFECTLY with the slight chocolate flavors. Then you get the crisp, fresh mint flavor to liven up the dark roasted tones. I love the scent coming from the dry leaf, and the flavor of this tea is just as great. I love it. Thank you, Fusion Tea Room for these generous samples.

So this bag that I’m holding reads “Roasted Cocoa Mint” — Yerba Mate. Yet steepster insists it is called something else. I would have edited the info except it was Fusion Teas themselves who updated this info last month. Mindhump?!? The ingredients in here are exactly as those on my bag, in the same exact order. So get from this what you will.

The tea is good. The dry leaf smells of chocolate. there are some rather large chocolate chips in it. Not many, but on the large side. The yellow petals (marigold?) and toasted rice are also not hard to find. Everything else, you need good eyes for, it’s sparse.

Brewed, 1.5 tsp for 5.30 minutes the tea is dark and smells mostly of mint. Ditto for the taste, mostly mint. There’s some oily stuff floating on the surface and leaving a ring on the teacup. It also has a lot of sediment on the bottom and this is after transferring! I steeped in DAVIDs steeper and then I transferred to a teapot where the resteep will also go, on top. Yah, I will be blending the two steeps.

Yes! Must sip down more teas! Oddly, my last small pot wasn’t very minty – just an little echo of mint end of sip.
You will be missed, mocha mint mate!

I was on a Fusion Teas kick today! Slow day at the office so I just brought my box of samples with me. Did this one for my morning pick me up! The chocolate and mint blended with the mate was fabulous. Exactly like a mint chocolate bar.
I didn’t taste the coffee at all, which personally probably made me like it better but if you wanted a coffee flavoured tea, this one might not be the one.
Overall- delicious! I am very impressed with the Fusion Tea samples so far!!!