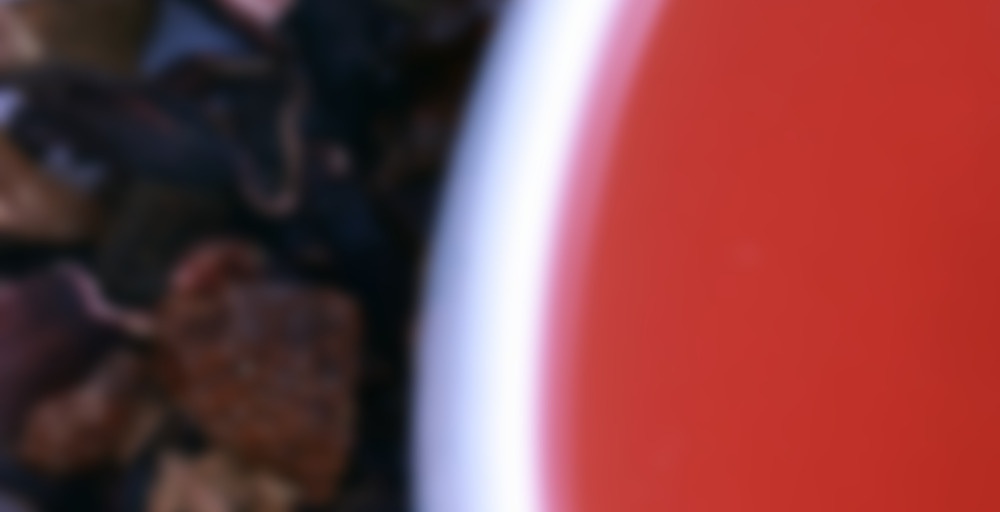 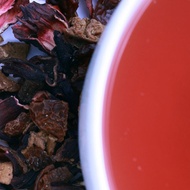 A rich flavorful “tea” that can be prepared hot or iced! As beautiful to look at as it is delicious to drink. A blend of rosehips, hibiscus, dried fruit and natural flavorings.

A tremendous dried peach fragrance wafted out of the sample packet as soon as I opened it. The mix is another chunky dried fruit trail-mixy sort, but it looks more like trail mix than some of the others I’ve had because it’s all neutral colors: tans, browns, burgundies, off whites.

It yields a really interesting colored liquor. The first time I tried it, I don’t think I used enough fruit and it made a dark peach, red melon sort of color that was gorgeous and gave off a light peach fragrance. The second time, I doubled the fruit to water ratio and got a dark red, hibiscus inspired color, just as gorgeous in its own way.

This isn’t unique among fruit mixes in that I find that I had to use a lot more of the fruit to achieve the flavor I was hoping for than one might expect to based on spoon measurements or even weights. The first time, I used two cups worth of fruit for two cups of tea, and it was tasty but a little watery and though I could taste the sweetness lurking, it was a little tart because the lurking sweetness was diluted. I pretty much doubled the weight one would expect to use for one cup the second time and got a much less watery, much more flavorful drink. It’s a sweet, peachy flavor with an earthy hibiscus base, but fortunately the presence of rose hips and hibiscus don’t render it puckeringly tart or bitter.

This is tasty, but I think the real thumb on the scale as to whether I’d order more will be if the boyfriend likes it. He’s a huge peach fan (he just had peach ice cream for dessert tonight) whereas I am a more moderate fan except in those occasional instances where the peach is ripe, juicy, and has a superconcentrated flavor.

Mmm. Peach ice cream. I remember making some with fresh-picked peached when I’d visit family in Georgia. So good.

Disclaimer – this review is only reviewing the tisane iced as I doubt I’d enjoy it hot.

The aroma of this tisane was amazing as soon as I opened the tin – I’m a huge fan of peach and the aroma made my mouth water.

I followed the brewing instructions on the tin (boiling, 8 minutes), but used double the amount of tisane, waited a bit, then poured over ice.

While I definitely tasted the peach, I would have liked it a bit more peachy (but then again, I’d probably just be drinking juice). There’s definitely a touch of hibiscus flavour (and tartness from the hibiscus/rosehips), but I really like hibiscus tisanes, so it didn’t bother me. It’s a juicy tisane and on a whim I decided to sweeten it a touch (I usually don’t sweeten my iced tea) – that really brought out the peach flavour and juiciness. I think that because of the fruitiness, I expected it to be sweet (like juice), but since it’s a tisane, it’s obviously not. I have to keep reminding myself to have different expectations!

Would I buy it again? I’m on the fence about this one – while it was delicious and I’ll definitely finish the tin, we’ll see if it grows on me even more – enough to purchase again.

This tisane has a soft peach and floral aroma. It has a subtle, slightly sour taste that is helped with a little sugar, which actually brings out the peach flavor while subduing the sour taste. This is actually a quite satisfying Peach fruit tea and would probably be delicious on ice as well.