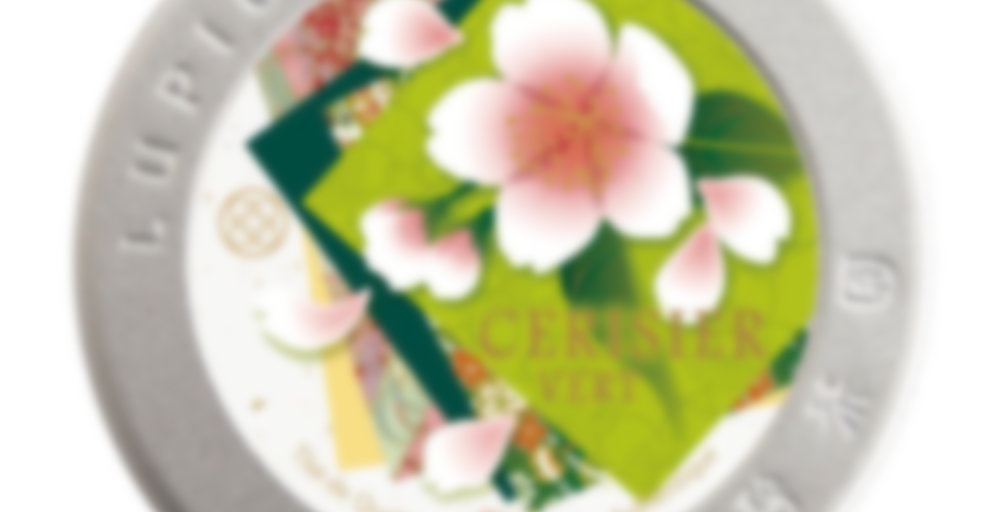 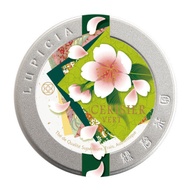 With herbaceous aromas, inspired by spring and cherry blossoms, sweet flavor of cherry is accompanied by fruity aromas evoking peach and strawberry.

I already told you about the liquid, cherry-flavoured penicillin that was forced upon me when I was but a tiny Anna, so I will spare you a rerun. Keywords like, ‘very vomity’, ‘traumatized’, and ‘still terrified of Dr. Pepper’ might help jog your memory.

Artificial cherry flavouring, hence, is about as far from what I can take as possible, palate wise. So in the interest of pushing boundaries, here I am with some of this. I don’t know if it’s one of those limited edition blends, but it comes in a special, extra-pretty tin, which is nice.

Again, I am conflicted when it comes to cherry. I mean – what do cherries smell like? What do they taste like? It’s one of the most elusive flavours to me, which might be a further reason (I mean in addition to the PTSD, mom) why it’s so hard for me to accept artificial cherry flavouring.

So does the dry tea smell like cherry? I don’t know. It doesn’t smell of Dr. Pepper, not even close to anything coughsyrupy or medical. It could be cherry preserves, I guess – more like jam than maraschino, though. The scent is rich and thick and darkly, stickily red – it makes me think of the cherry pie in Twin Peaks.

In the cup, the scent metamorphoses to something much closer to the cherry I’m used to. But as you may remember, Lupicia also do the bitter almondy, plummy nuance of stone fruit – Ume Vert is one of my most unexpected favourites. This scent lands somewhere in between. I get both the plum pit and the potentially scary cherry.

Taste wise, I’m surprised to say I can drink this without any signs of retching or wanting to curl up in a fetal position and mutter reassuringly to myself. The steeped tea is in no way cloying, and the aftertaste is lightly floral. All in all, this is a fairly delicate tea – not overly complex, but pleasant and highly drinkable. If I sound detached, it’s because I have no idea what just happened, but apparently there’s a cherry-flavoured tea that I can both drink and enjoy? Okay – mind blown.

ETA: Well, this is definitely a limited edition… with the little kicker that it actually doesn’t exist on the US site. This is a first, but the US do get the black version, and it’s called Cerisier, so that’s the name I’ll enter into the database. Oh, Japan, you and your obsession with French stuff. SO confuse.

ETA 2: In other news, French Lupicia have now added an English version of the website… with English names that are direct translations of the French names for the teas, and not pulled from the US site. Just to make things a little bit more confusing. But hey, somewhere a translator got paid, and I’m all for that.

I took a lot of antibiotics as a child, and they always put horrible flavors in them. I don’t ever remember cherry, but to this day I hate fake strawberry and especially fake banana. Bubblegum is also terrible.

I also got the fake banana. Urrrrrgh. It’s still difficult, but I managed to down quite a few banana split ice cream daiquiris (I did it for science) when I was in NOLA in March – so I think I’m improving.

When they wanted to make me try the strawberry-flavoured one, my mom said, ‘No. This child will henceforth swallow huge pills.’ and so I did that instead. Much better.

For me it’s bubblegum – we had this horrible fluoride rinse in my elementary school days called Swish that was bubblegum flavored and absolutely terrible. Ughh shudders

I still have to use the bubblegum flavoured fluoride. It’s still gross. I actually just recently really got into strawberry flavoured things. I used to hate it so much because of medicines!

I can’t imagine enjoying a banana split daiquiri unless it had real banana in it…and even then, maybe not. Ugh. Oh and I forgot about the bubblegum fluoride crud. YUCK!!!

It was pretty much blended ice cream with alcohol. It was amazing.