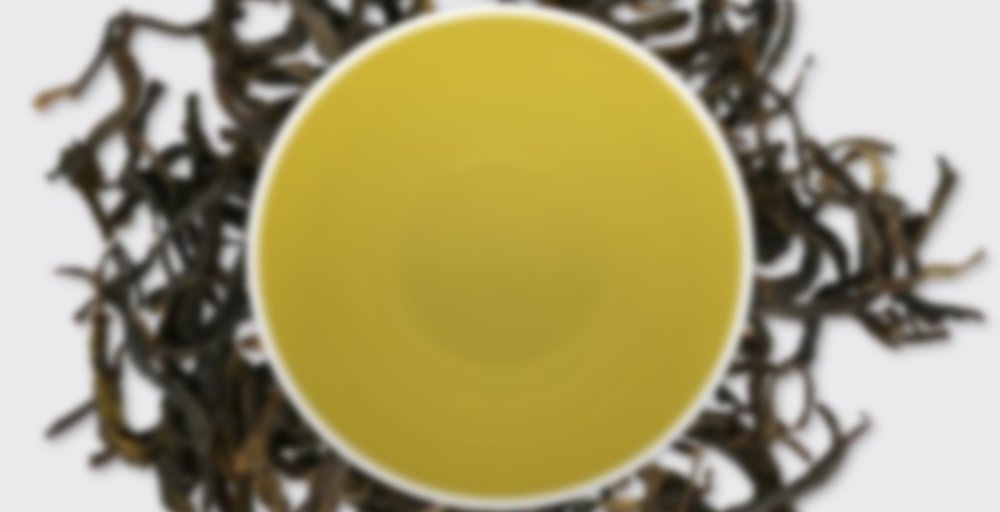 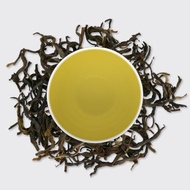 The result is a golden liquor which is rich, smooth and sweet with a minty cooling hui gan. The fruity notes of the Young Gushu range is expressed in more tropical sweet fruits like mangosteen and this pairs perfectly with a light herbaceous spiciness. The smell of the empty cup is pure buttery apple indulgence.
This Gushu is a creeper in terms of drunkeness. At first it seems to be quite a gentle Gushu but that chaqi will rise and it will get you to that Gushu high that we all enjoy! This is a classic Friday night tipple.

It is not often that I drink sheng as mao cha, in fact this is only the second time I’ve done so. As the ‘young’ in the name of this tea suggests, it is aimed specifically for drinking young, so I was very interest to try it out. Because of being targeted in such a specific manner, I’ll be evaluating it based solely on its merits right now without taking into consideration any aging potential like I would normally do.

I’ve had the open bag hydrating in my pumidor for a few weeks. That’s not necessarily as much time as I typically give other raws, but since this is aimed at immediate consumption one would expect it to perform at least adequately. I used 9.35g in my 140ml gaiwan and gave the leaves a ten second rinse followed by a ten minute rest. This was followed by nine infusions, the timing for which being 6s, 6s, 10s, 15s, 20s, 30s, 45s, 75s and 2 min. respectively.

I was very surprised by how light the first infusion was. It wasn’t necessarily weak, but the flavors were very light and thin. I’m not sure if the tea was actually watery per se, but the flavor profile at least was very close to water. There were some young sheng flavors present and the tea was hinting at bitterness and astringency without actually being there yet. At this point I wasn’t really sure what to think of the tea so far. The second steep was still very light, but not very pleasant. The tea was losing body now. Up to this point I’d been using my standard boiled water that I always use for sheng, but starting with the next steep I decided to switch to the vendor’s recommended 95°C to see what that does.

The change in temperature didn’t bring much change in the third steep. The tea was a bit softer, but it was starting to taste nasty to me, which can happen with some raw pu’ers this young. The taste was generally quite mineraly, with perhaps some very minor underlying sweetness. Once the tea cooled it started to taste bitter. The next steep didn’t bring much change. The taste was starting to be quite metallic albeit overall the tea was less nasty than before. Although subtle, I noticed some cooling in my airways as a result from this steep.

Sipping the fifth infusion, I noticed this tea doesn’t really have the green and astringent character often prevalent in young raws, but instead it features a dominantly mineraly character with a slight tinge to it that I personally find unappealing. After extending the steeping time a bit more for the sixth infusion, the tea now had a soft texture to it. Taste-wise it was virtually identical to the last steep. It did however have a slightly mood-elevating effect.

Pushing the tea again just a bit harder for the seventh steep, there was now finally some more body to the soup. While the tea was still very mineraly, I noticed that it was beginning to taste less nasty, or perhaps I was just starting to get used to the taste. The issue is that I’m not generally a very big fan of mineral tasting teas, so it wasn’t really doing it for me. The tea was however beginning to put me in an elevated yet calm state. I also started feeling some tingling at the back of my head and behind my ears.

The eighth steep was a lot thinner than I’d expected. It had an interestingly bright taste. While it was slightly metallic, it also hinted at perhaps some fruitiness and maybe even some slight sweetness. At this point the tea started to be a bit drying on the tongue. The ninth infusion was the last one I did. I perhaps pushed the tea a bit too far too early and the resulting soup tasted a bit nasty. It wasn’t that bad but still. Still, I decided to call it here. I’m sure the tea could have gone on for likely several more infusions, but I felt I’d seen enough and wasn’t interested enough to see what else the tea had to offer at this juncture. Strength-wise the tea was still going strong, so I expect it had many infusions in it still. I’ll be getting a smaller gaiwan (~60ml) very soon, which should make sessioning these teas a lot easier and faster. Hopefully for the next review I’ll already have it.

My thoughts on this tea are mixed. I didn’t really see much reason to be drinking it for the taste, but perhaps there’s a way to brew it that makes it tastier than the way I brewed it. The mouthfeel was rather disappointing for most of the steeps, but when pushed a little it did improve in a couple of the steeps. The longevity seems excellent, but the real saving grace for me is the calm, gentle qi. This tea doesn’t have any of the intense rushiness that many young gushus tend to have, instead it is very pleasant and subtle. I could still feel the tea affecting me some time after the session and the sensation was rather pleasant while it lasted.

I’m glad I didn’t abandon this one halfway through, but I don’t think the qi alone is enough to salvage the tea. Despite how it’s marketed, I am going to save the rest of the bag for later and give the tea a few more months before I try it again. I think at least right now the tea is rather dull, but perhaps I was expecting too much. Had this tea cost more per gram than it does or not had the qi, I would have given it a negative rating, but for now I’m rating it as barely neutral. Perhaps there’s a way to brew this tea that yields better results or perhaps it will improve with some more time in the pumidor. Either way, if I manage to brew this tea in a significantly different way, I will do a follow-up review. If not, then I won’t.

Edit: I’ve had another session with this tea and changed my rating from neutral to not recommended as a result. See the comment I’ve left below for more.

I drank this tea again today and it has not improved in three months. The rinse was pretty good, but by the third or fourth steep the tea had gotten so nasty I decided to end the session there. As this is a tea marketed specifically for consumption young and as something that people new to raw pu’er can possibly appreciate, I find the nastiness I’ve encountered both times in this tea simply unacceptable. I don’t remember if I mentioned this in my original notes, but this tea makes my gums hurt and as it has happened both times now I know it’s definitely the tea and nothing else.

I haven’t reviewed it, but Crimson Lotus’s Simple Sheng is a great example of what a raw pu’er than can be consumed young and is friendly toward beginners should be like. It tastes great, is extremely forgiving in terms of how you brew it, and while it’s not actually that cheap per gram, it’s made from good quality material that’s above mere entry level and does offer fair value for the price. In light of how Young Gushu 2017 fails at doing what it sets out to do, I’m changing my rating for it from (barely) neutral to not recommended.

Very pleasant sheng puerh for a beginner. No bitterness, gentle astringency, fresh notes of hay and camphor. No complexity.
I’ve done many steeps, all were pleasant and refreshment.
I can highly recommend this tea both for a newbie to puerh world and experienced one whose quest is in fresh puerh in ‘green tea’ style

I am a puer newbie, so for a newbie, this is a pretty neat puer. It tastes like apricots. It is an apricot hammer. Apricots and a little sugary sweetness. The finish is super long and sweet, and the body of the tea is quite thick compared to what I usually drink. I imagine it might be a little on the plain/boring side for a puer connoisseur as the taste doesn’t change much throughout the infusions. I did manage to stick with this tea for 10 infusions, and it seems to be pretty forgiving; it didn’t get bitter or dry on me until the end.

A good start to getting into puer to notice all that goes into processing such fine tea. It has all the unique characteristics of a good raw pu’er and it is very fresh and cooling. After every breath I took, I felt a smokey minty feeling in my mouth and throat. It’s crisp and very light in its astringency. This young gushu is made from 600 year old trees from Bing Dao so I can certainly see the result of this tea to be very satisfactory.