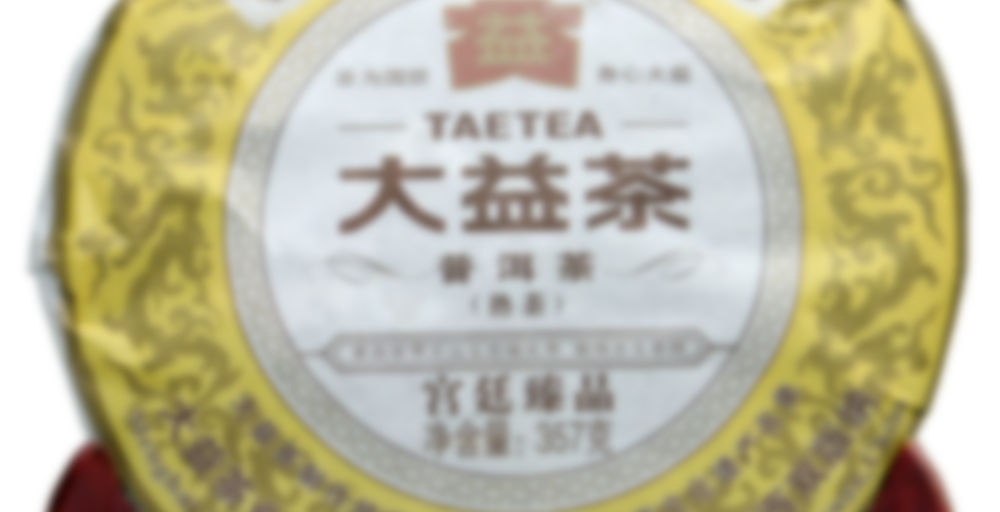 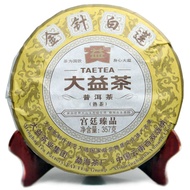 by Menghai Tea Factory
88
You

I was lucky enough to get an 8g sample from Bana tea. Wow whoever added the hazelnut notes is right on the nose. This is so smooth and delicious with real nocciola/hazelnut flavor (think a really high quality nutella).

The infamous Golden Needle White Lotus. I acquired a cake of this a while back through Yunnan Sourcing and after giving it a few months to sit in my pumidor I finally decided to give it a taste. The cake is very similar to the Yong De Blue Label I reviewed a while back in that it consisting of predominantly very small grade leaves the bing feels like it’s going to come apart at any moment, and thus the bottom of the wrapper was covered in a record amount of loose leaves.

I prepared a fairly standard amount of 11.3g in my 160ml Jianshui clay teapot and after a brief 10s rinse and a 10 minute rest I got to brewing. I did a total of eight steeps, for 12s, 12s, 12s, 18s, 25s, 48s, 90s and 2 min. 30s according to my mental clock. The smell of the cake, the dry leaves in a hot teapot and the wet leaves after the rinse were all extremely classic examples of a typical shu pu’er. The rinse liquor, however, had something atypical about it. I don’t really know how to describe it, but it was interesting.

The first infusion brewed a cloudy reddish brown, like muddy lake water. It was a strong steep, with a dominant earthy character and a grainy texture. Some might say it tasted like muddy lake water. There was no sweetness. The next infusion brewed darker as is to be expected. There was less earth now, a hint of chocolate in the background, and the tiniest amount of sweetness without there being any actual sweetness in the tea. Overall the second steep had a rounder, more balanced taste. The tea was still very strong, but a nudge below the first one.

The third steep was even darker reddish brown, but not even remotely close to black as I’d expected from such small leaf grade. The strength ended up being weaker than the last two, however, because I flubbed trying to extend the steeping time by a couple seconds and the infusions ended up being about the same time. But it wasn’t weak by any means, just weaker in comparison. The tea had a very distinct flavor of coffee, one that has stood on a hot plate for a while and then cooled a bit before drinking, but without the bitterness. The taste of coffee was especially noticeable in the aftertaste.

The fourth brew produced a clearer, less dark liquor with most of the cloudiness now gone. I was getting a very typical shu pu’er flavor now, with maybe a hint more sweetness without there being any actual sweetness in the tea still. For the first time, and I think for the only time, there was now maybe a bit of body. I was disappointed at first by the sudden super generic flavor, but in the end the infusion wasn’t bad actually. As I was sipping the next steep and noting the flavor dropping off a tad, I recalled that I learned from brewing the Yong De Blue Label that I need to extend the steeping times much more aggressively with these really small grade ripes. There was nothing noteworthy about the steep itself. It was similar in flavor to the last one, but managed to be far less enjoyable.

Despite practically doubling the steeping time for the next infusion and the strength being adequate, the flavors were starting to get thinner. The tea had a very mindless shu flavor to it, with once again a degree more sweetness without being what I’d actually call sweet. I may have also noticed a bit of minerality pushing through in this infusion. Despite the front flavors being disappointing, the aftertaste was pretty okay actually. I can’t be sure about this, but I may have also noticed some very, very mild cha qi in my chest/temples.

For the next infusion I nearly doubled the brewing time again and now most of the other flavors had dropped off very sharply with a lot of sweetness emerging in their stead. Despite being actually sweet for the first time, the tea still wasn’t terribly sweet for a shu pu’er. Besides the sweetness, there was still some discernible shu base in the background. Flavor-wise this infusion was pretty decent, not great, but not terrible either. Like with the previous steep, I thought I may have noticed some qi building in my chest/head. The tea also made me sweat a bit at this point.

The eighth steep was the last I did. It had an acceptable level of strength to it still, but the flavors that now leaned more towards the darker end of the spectrum weren’t very appealing to me. The brief prior sweetness had nearly completely dropped off, although you did get some of it in the aftertaste. One could probably have continued steeping the leaves still, but I suspected I might not enjoy where this tea was headed or that it might turn flat out nasty, so I decided to stop here.

Overall this was possibly the most underwhelming shu pu’er I’ve had so far, but granted I’m still very new to ripe. It’s not bad, and I wouldn’t mind having it once in a while, but the flavor profile didn’t really appeal to me and at least in its current state the tea feels like it’s lacking something. For me that something is sweetness. This is clearly a quality product, but at least right now it lacks something that makes it stand out and feel special. To me some of the flavors feel perhaps a bit underdeveloped, which is something that will hopefully improve with some more age, but I will admit I have zero knowledge let alone experience about how shu pu’er can be expected to develop over time. I’m hoping this one will develop some sweetness as right now that is my biggest gripe about this tea. Granted I did not fully steep out this tea and I did a poor job of brewing it, but still even for a gong ting style tea this one seemed to not have that great longevity. I could be mistaken about that though.

I sensed more potential for improvement in this one than in some others, but at least in its current state I find this tea difficult to recommend based on my initial impressions. I will have to revisit this one at a later date, but I doubt brewing it better will make enough difference to change my thoughts on it. A couple more years of age will hopefully have a positive impact on this tea. Some small changes might make a difference.

I am not a big shou drinker, so I have been picking away at what I had of this for a couple years now. This past session took up the last chunk that I had left. This is a really great shou. The leaves are heavily compressed and give off no fermentation stank, rather they have high notes of spiced wood and earth. I warmed up my zisha, broke the chunk in half, and threw in both pieces. The warmed shu smells great with burly nuttiness, sweetness, and damp wood. Honestly, I was picking up a definite nutella tone. I washed the leaves three times and proceeded with brewing. The taste is somewhat thin with a slight dryness at first, but it builds in thickness and smoothness as the session goes on. The tones start with a great nutty base along with a great sweet syrupy background. Due to compression, this session lasted for quite a long time. The dark leaves became sweeter and sweeter with more pronounced earth, hazelnut, dry dark cacao. The qi is an intense warming sensation in the face and lower abdomen. I can feel brief bursts of energy the ebb and flow with the session. This is a great tea, but I think its a bit too high priced for me. I couldn’t see myself spending this kind of money on shou. However, it is a stellar tea, and it will always please!

Through two-steps, thus is a very nice tea! Creamy…sweet…no hunt of fermentation. I sell caramel and malt and sweet from the liquor. Wet leaves almost smell smoky, but not drop of smoky taste in this. Very bury smooth! This tea will be one that I will buy again!

I read somewhere that someone really liked this tea from YS so I decided to buy a cake from them. If you look, it is $53 which is high for a ripe since they are cheaper than raw. I really liked seeing that this was an authentic cake though; all those little things make it more fun to open up. My view on ripe tea is kind of negative because while I enjoy it, I believe they are about all the same while sheng varies much more. Of course someone can point out the difference in a WP ripe versus a $5 full size cake; but something about cakes that cost a bit more seem to all taste the same to me. This cake was highly compacted and pressed well which took my pick to get a chunk off. Upon steeping it I noticed the aroma that ripe has but with no funk to it which was a positive already. The taste throughout the 8 steepings that I drank were very fine and smooth. While there may not be a unique taste associated with this tea for me, it is the smoothness that runs through the steeps with this tea that appeals to me. A sample of this would come up with the same tasting notes and I wouldn’t have purchased it. I’m not regretting my purchase, but I may be realizing that ripe just isn’t my type of tea. However ripe tea will be my great friend when winter rolls around :)