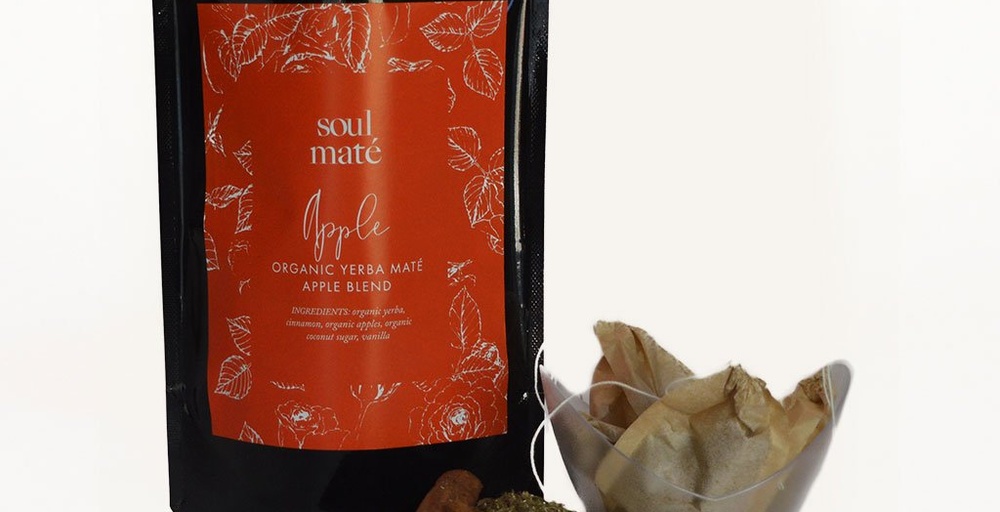 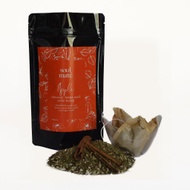 by Soulmaté Yerba Co.
77
You

Cameron sent me a lovely box of British snacks (that are woefully unavailable in my area of podunk Idaho) and a few tea samplers, including this one, Bird & Blends Campfires and Vampires, and a few more French teas to add to the French Friday sampler baggy! Thank you, Cameron!

I have only had a handful of mate blends, and I think of that handful, most have been roasted mate rather than green mate. I’m always curious about them and happy to try this, especially since teabags aside, the website only has looseleaf in the dreaded Sara-refuses-to-buy 4oz sized bags. Steeped this for around 3 minutes using 185F water. The resulting brew is a goldenrod yellow and perhaps a little murky looking, which I suspect to be from the cinnamon; it has a very strong cinnamon aroma. I’m getting the scent of the mate too, which has always been very “gunpowder green”-esque to me: a bit of dry grass/hay, a bit of smoke, just more herbaceous in quality than gunpowder green. I’m smelling a sweetness, too, but it’s making me think more of honey than the aroma of apples.

Hmm… I do like the flavor of this a lot more than standard mate (which is often too “tobacco” tasting for me). There is a sweet cinnamon note that hits the tongue first, then a very herbaceous grassy/hay note follows, and I’m not getting the unpleasant smokiness that usually turns me off. But I’m not really tasting apple? I guess the sweetness leans a bit fruity, but I’m still getting more of a “honey” sort of flavor than a “juicy apple” sort of flavor. I feel like the last several apple teas I’ve tried I’ve wanted a stronger apple note…

It’s a pleasant cup. It would just be more pleasant if the apple flavor stood out a bit more against the cinnamon and herbaceous green mate notes.

I agree, the apple is quite subtle here. But I liked it anyway!

I liked it, but it seems most apple teas I try I am left wanting MOAR APPLE. I think Tsugaru Green is one of the few that comes to mind where it feels sufficiently apple-y.

The first one from my December Sips by box! This is both the one I was most excited about and the most festive with the apple and cinnamon flavors. The dry leaf was quite dusty and fine, so I only steeped it for 2 minutes. I’m never sure what temperature to go with for green maté, and their website was not helpful, so I used a green tea temperature.

I really like this! This might be the closest to a straight yerba maté that I’ve ever had – the maté itself is front and center. It has such lovely soft and sweet hay and dry grass notes to it, and a mellow earthy herbal-ness that I find really comforting. It’s like somewhere between a white tea and a linden or verbena tisane. The apple is mild but fresh and crisp – it complements the base well. It tastes like a tart apple to me. There’s also just a whisper of sweet cinnamon adding some warmth.

I noticed “coconut sweetener” in the ingredients, but happily I’m not getting a lot of sweetness here. We’ll see how that changes as I get to bottom of the little bag… XD

This really interests me! I usually find yerba mate tasting very “gunpowder green” like, smokey/ashy or even cannabis-esque and I hate that note. But grass/hay with apple cinnamon sounds very nice.

I’d be happy to send you some! With your Jaffa Cakes, ha ha!

Haha! I wouldn’t turn it down, but at least wait until shipping isn’t crazy. No rush. :-) I appreciate the offer, though! (I’m drinking from that Mulled Wine Magic stash you sent me tonight, many thanks for that! It continues to hit the spot.)

I’ll be sure to save it for you then!

You seem to get awesome picks from Sipsby. I’ve tried them a few different times for pretty long spans and always end up disappointed by what they send me. Maybe I’m too picky :)

Alita, I saw Mulled Wine Magic on clearance on T2’s site if you need a restock!

Nichole, this is my second month of subscription since I came back, and I’ve been fairly pleased. Although I wonder if I should take chai out of my preferences, because they sent me a plain masala chai in both boxes…