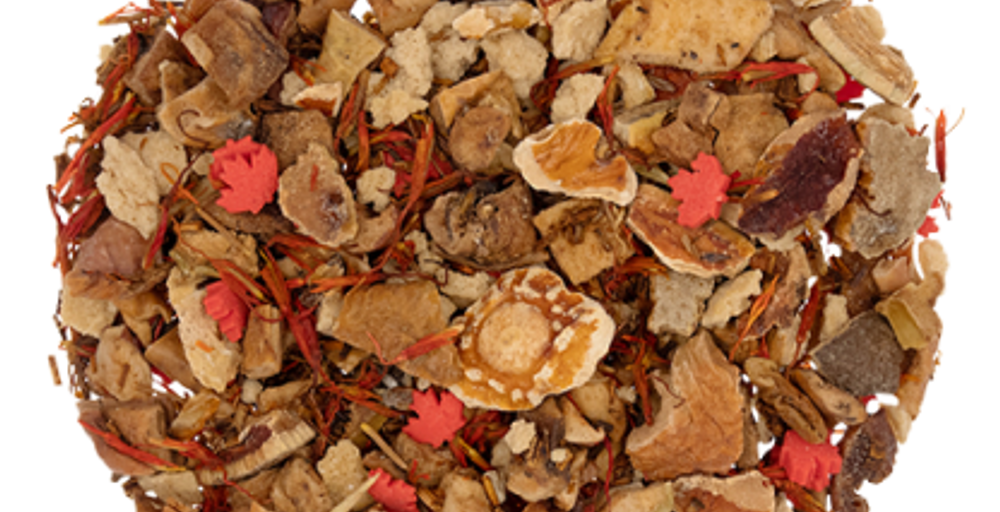 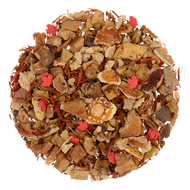 O’Canada! This maple syrup-loving, cozy toque-wearing, merciless winter-enduring, hockey-obsessing true patriot red Rooibos blend is as strong and free as they come. (Really, it’s all a-boot the maple sugar!). Grab yourself a cup and relax on the chesterfield, eh? Friggin’ game’s on, bud.

I believe this is meant to mirror DT’s “Oh Canada” blend – the revamped one, not the OG.

I think it smells quite nice – more of a lighter maple with some nutty and apple-y undertones to the smell. It looks very similar to, including the little maple leaf sprinkles. I had it in a Locktop during a metro ride, and I was definitely taken aback by the level of sweetness. It was a little bit like getting punched in the throat by a Lumberjack or, uhh, someone who works with a lot of maple!? I don’t know – the metaphor got a little away from me.

I had a hard time feeling like that amount of sticky, lingering in your throat sweetness was caused by the maple sugar/sprinkles in the blend alone. Thinking about it, I think it’s partially that but also partially the cinnamon (which was more of that “red hot” cinnamon) and partially the bael nut. Bael nut is not an ingredient I have a strong familiarity with and I had to actually look it up to try and understand why it may have been included in this blend. Based on what I read, it seems like it has a comparable flavour to the round/darker sweetness that Monk Fruit has. That would make sense, because DT’s blend used Monk Fruit…

I think a shorter steep time or less leaf, as well as things like the addition of milk, could temper some of that sweetness – but personally I think I prefer the DT version here because the level of sweetness from the Monk Fruit (which is definitely still pretty sweet) is more manageable for me without those little tweaks.

I cut down trees, I eat my lunch
I go to the lavatory
On Wednesdays I go shopping and have buttered scones for tea~~~

I cut down trees, I skip and jump
I like to press wildflowers
I put on women’s clothing
And hang around in bars…

Oh dear, someone needs to go watch “The Lumberjack Song” on YT, stat!