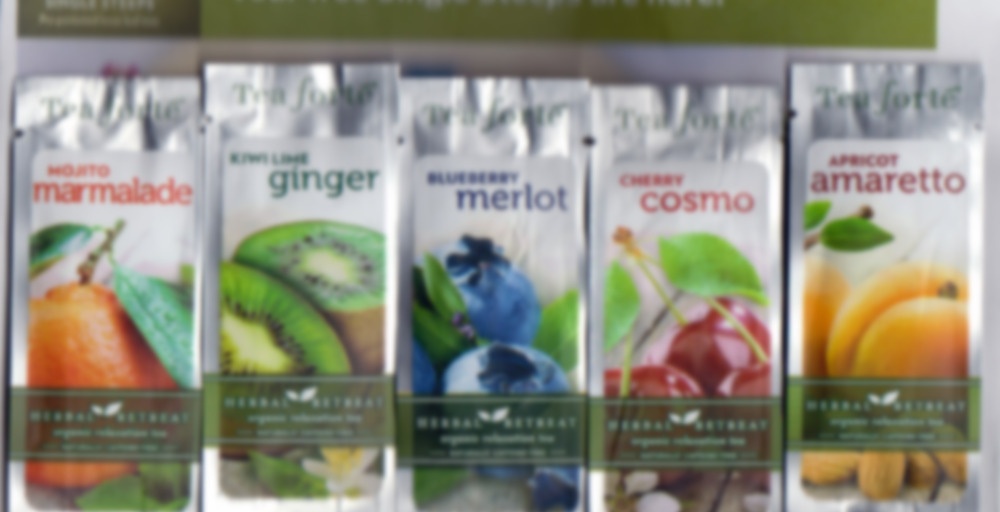 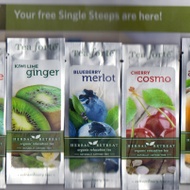 Apricot Amaretto; Fragrantly fresh citrus with the sweetness of wildflower and honey.

Blueberry Merlot; Deep taste of succulent summer-sweet blueberries with wisp of sage to heighten the cup.

Cherry Cosmo; Relaxing taste of plump cherries with a fragrant delighting in hibiscus blossoms and raspberry.

Key Lime Ginger; Sunny scent of fresh picked citrus complemented with the taste of ginger with a lingering taste of the tropics.

Sample pack is from Tea Forte and today I decided to give it a try. I selected from the pack the Apricot Amaretto from the Herbal Retreat brand; organic relaxation tea.

It is a strange way to begin one’s day/morning in wanting a cup of relaxation tea; yet that is what i wanted this morning…as described; a double delight of sweet apricot and juicy peach with nuanced notes of almond.

This much I can attest to, the almond scent was indeed over powering, erasing seemingly all other notes. There was a hint of sweetness in the cup. I am unsure as to which fruit lingered in the sweetness more; but the almond was very pronounced.

So first thing in the morning I am wanting a cupful of almond, depicting my state of mind perhaps.

I must say this is loose tea sample; so I had to retrieve from the cupboard a tea infuser that I had purchased some time ago from another tea merchant during a store visit. It is The Teapot Tea Infuser with drip tray, made of stainless steel.

I opened the small packet of Apricot Amaretto and removed the lid from the tea infuser. Now I had to try and scoop some of the tea into this infuser and not make a mess/spill it. But I did make a mess of it since no spoon I have is small enough to get it in there; I did eventually…but it all seemed so ridiculous.

I simply put a spoonful of the tea leaves/crumbs into my cup and poured the hot water; later on during the day I added a simple tea bag of green tea and let that brew with what was at bottom of the cup.

I ended up having green tea flavored with sprinkles of apricot amaretto. It was very nice.

I am re-reading this today and laughing out loud. I need better things to be doing then subjecting myself to be ridiculed at my drink of choice.

I finished the last bits/crumbs of the Apricot Amaretto mixed with my green tea bag; it truly did add to the flavoring of the green tea. I think the Apricot was what made the tea sweet…mildly liquor like.

haha I love your review!
Sounds like we need tiny spoons to get into the tiny bags :)

Having tried all or most of the Tea Forte’s samplers; The Apricot Amaretto and the Blueberry Merlot wins out over the resting non notes. Making me partial to almonds and the likes.

Despite differences in flavoring and type; once you try one and another of the same brand I think the taste bud is already prejudice to that maker/brand. I mean the palate is induced, conformed even to this particular brand.

I’ve tried them all but the Blueberry Merlot and the only one I’ve enjoyed was the Mojito Marmalade. It was the first that I sampled and it lead me to think I’d love the rest. But the others have just struck me strangely. :( The Apricot Amaretto tasted to me like Cherry Halls, the Cherry Cosmo like strange Kool-aid, and the Key Lime Ginger was just a ho-hum ginger root tea in my opinion. So as a package, I would not purchase this.

Boiling 5 min, 0 sec
Yours I Like This
5 likes
1 comments
Edit

With the Apricot Amaretto, all I could recall was the almond tasting. I guess this means I am very familiar with almonds and other nuts like cashews, pecans etc.

So I’ve now tried all of them and only really liked the Blueberry Merlot, all others were “okay” except the Kiwi Lime Ginger which is like drinking Vicks Vapor Rub.

As to the sampler set itself, I liked the easiness of the single-cup pouches. Though, I would ordinarily like two of such size as, unless I get a strong first impression, it takes me a couple cups to tell if I like a tisane. So, since they are single-serve only, my reviews of each are first impression and not fully rounded reviews.

All in all, I’m glad to have had the sampler and to have tried the variety; but only one drink stood out as one I’d buy more of.

I strongly disliked three of the five.