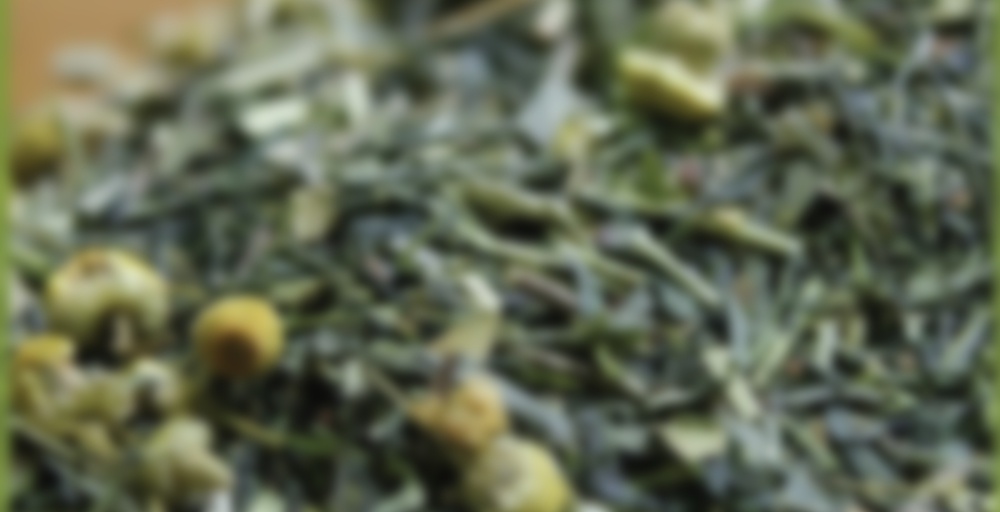 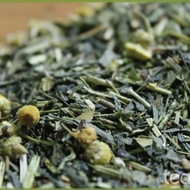 Out new delicious blend of spring harvest Kukicha with the rich honey aroma and flavor of organic chamomile flowers.

The chamomile flowers sweeten and accentuate the unique roasted aroma of the Kukicha, while at the same time mellowing out the assertiveness of the summer harvested green.

Low in caffeine Kukicha blended with chamomile, St. John’s Wort and gingko will help to relieve the stress and tension of daily life and lift your spirits.

Perfect to take at night.

Cuppa Tea With Me 80

Good Morning Steepster-ites! It’s amazing what a good nights sleep, morning shower and 82 calorie juice breakfast can do to a gal. This day is officially the start of D Day, which is diet day for me and not about the Normandy Landings of WWII. Though honestly the beginning of a diet feels like a war, there will be hunger, pain and suffering after all.

This loose leaf looks heavily Kukicha or Stem tea, I can’t see the chamomile, St. John’s Wort or gingko amongst them easily at all. For those that are unfamiliar with Kukicha or Stem tea it is literally the stems of green tea leaves so they are thin, longish and consist of both green and yellow colours.

Whilst still raw it has a sweet and rich grassy scent with a dry herbal background.

Once steeped a darkish yellow liquid is produced that bares a sweet yet oddly savoury scent of grass, herbs and soup broth. Must be an umami appearance. Again if anyone is not familiar with umami it is the fifth taste which is often featured in Japanese teas, it’s savoury and soup like. Some wonderful light reading here if you’re interested in umami. http://en.wikipedia.org/wiki/Umami

Flavour is sweet and thick with savoury umami tones that linger on the tongue, resembling grass, soup broth and flowers. Slightly dry in the after taste though forgiveable. It starts of savoury but sweetens and lightens gradually. For the most part it tastes like a standard Kukicha but there is a touch more herb and flower flavours present, though hard to define what they are without knowing. Also a little toasted, like toasted sweet grass, the more I drink the more this stands out.

It’s a nice blend, since I usually prefer unflavoured teas I find this particularly delightful. Plus I would like to point out the added bonus for both the Kukicha and chamomile being organic. I would say this is nice enough to even buy more of in the future, though as it’s mainly Kukicha tea it would so be a nice introduction to Japanese tea for anyone wishing to try umami.

I’ve had that kind of experience many times where I think, “Hmm, this must be umami” but am not entirely sure I can only go by definitions and descriptions on the internets.

Moving stress is setting in, so I decided to break into my envelope of Tealux Japanese Spirit, which boasts St. John’s Wort, gingko, and chamomile in a kukicha base. This blend is supposed to calm frazzled nerves, so let’s hope that it does. What about the scent and the taste?

The dried tea smells very sweet and strongly redolent of substances other than kukicha—I presume the St. John’s Wort and gingko. It does not really smell like chamomile, despite the presence of some full buds. I believe that the sweetness is primarily from the gingko, but I’m not sure what St. John’s Wort smells like. I have had gingko-laced tea before, so that does smell familiar. The scent of kukicha (which I love) is completely shrouded by the additives.

I am ambivalent about adulterated Japanese green teas, since I tend to agree with the Japanese that they should generally be imbibed au naturel. In this case, the blend is clearly intended to be a functional tea, so I suppose that the only remaining question is why to use kukicha as the base rather than something else. Perhaps this was chosen because of the low-caffeine content.

The flavor of the tea base, like the scent, is somewhat drowned out. Hopefully the gingko and St. John’s wort will “help to relieve the stress and tension of daily life,” as promised on the package!

second infusion: this round was better than the first. It tasted more like tea and less like medicine.

Moving is always so stressful. Hoping the tea helps, and you have a relaxing evening!