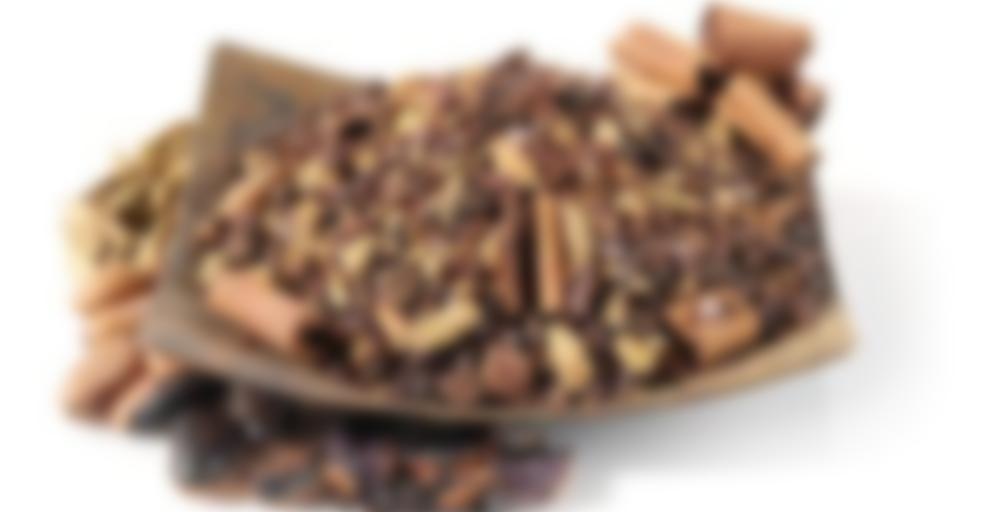 I went through an ordering phase not long ago where I stuck anything that had the word chocolate in it in my shopping basket any time I bought anything from anyplace. Ok, maybe that’s a tiny exaggeration, but it was certainly true of online tea shopping. I was kidnapped by the chocolate tea nymphs and made to do all sorts of unimaginable things.

That explains why I voluntarily ordered rooibos from Teavana.

The mixture is kind of funky. I found what looked like about half of a stick of cinnamon in among the pumpkin-seed looking green cardamom, almost purple colored flakes that must be the chocolate, red rooibos, something that looked like chocolate chips (carob?), and assorted other hunks ’o stuff.

The tea looks a lot like apple cider, the kind that’s opaque. Oddly it doesn’t smell very chocolatey. There’s some chocolate right at the beginning, then a lull of almost no aroma, then the spiciness at the end, with a black pepper exclamation point.

The flavor is pretty much the same. It’s surprisingly vacant right in the middle, with flavor at the beginning and the end of the sip. I wonder whether, like other Teavana blends, I should increase the mixture/water ratio?

Better yet, I think I should make this on the stovetop with milk and sweetener and see how it comes out. It does have a lot of similarity with a chocolate chai, without the caffeine.

Further experimentation will be necessary. Though I’m not getting a lot of rooibos thanks to the spiciness of the blend, this would not be a top choice for me among tisanes just drinking it straight up.

Thanks for saving me from this one! :) You should try Choco*Late from American Tea Room. I LOVE it.

Has you tried Chocolate Tea from Harney and Sons? I am on the fence about ordering it. I don’t NEED it but I might…you know….need it.

The H&S tea isn’t bad, I’ve had it, but it’s very subtle — like most of H&S’s teas. High quality, and a very balanced blend.

For splurging and feeling like I’m actually sipping something with chocolate in it (because I am), I really like Chocolate Delight from Tea Guys. If you brew it like a chai on the stovetop (boil it in water and then in milk), it’s fannnnntastic. Sweeten it with a wedge of Scharffen Berger and you could be forgiven for thinking it was actually hot chocolate.

Omg I need chocolate! Hmm I have Chocomate and Chocolate Mint rooibos – opposite ends of the caffeine chain but they’re both equally divine. (my two cents).

Will try all these chocolate marvels I haven’t yet had the pleasure to try. Eventually. I am having anxiety dreams where I find myself sinking in a quicksand of tea containers!

Backlogging
I love chocolate. I hate red rooibos. Will love conquer all?
Whoo! Yes it does! Rooibos I can love! Which makes perfect sense because everything is better with chocolate.
And chocolate this is! Ginger, raw cacao, and cocoa are very strong with this one. The first cup was so strong it almost aggrivated my sore throat instead of curing it. I tried the second steep with chocolate almond milk (cocoa gone in the first cup) and it still was strong enough to clean my throat, nose, and the windows. And the best part? This rooibos was nutty, overwhelmed and tasted good. Thanks to KeenTeaThyme for swapping!

I’m glad this worked out better for you. :)

Thank you to Doulton for sending me some of this!

This is really quite good. The chocolate and spices are strong and while the rooibos is there, it isn’t a strong flavor and doesn’t interfere with the spicy chocolate flavor.

I’m not big on spicy, but my boyfriend bought this for me for Valentine’s Day (aaaaaaaw, how sweet) so I felt obliged to drink up.
I’m not a big rooibos fan either, although I tolerate it when I can’t have caffeine.

It’s kinda neat looking at the dry leaves and seeing all the spices mixed in, especially the big pods that I think are cocoa kernels.

So this blend is pretty much what it promises to be – a spicy hot chocolate-like drink. Unfortunately that rooibos flavor is there, too, so for me it doesn’t work as an actual hot chocolate substitute. Also, ginger dominates the spice flavors. Definitely not a flavor combination for me.

I really thought I tried this one and ended up being wrong…thanks to LiberTEAs for keeping an eye on me! LOL

It isn’t bad. Whenever I make it at work co-workers swarm my office and don’t believe me when I tell them it’s tea.

Sipdown of the last of this in another latte. Going to miss this one in my cupboard now that I’ve discovered how to make it awesome.

Okay, so I know I’ve been saying red rooiboses aren’t doing it for me nowadays, but having had this one before, I knew that the rooibos flavor is just a side note in this particular blend, so I was okay. Plus, I blended it with Teavana’s Cha Yen Thai, one of my absolute favorites of theirs, which added some excellent spice and coconutty depth. The chocolate flavor came out right near the end of the sip, which was just perfect. I highly recommend doing this blend, if you happen to have both of those teas. They are similar enough not to clash, but different enough that each of their quirks (the coconut and the chocolate) still shine through well enough. Sort of like well-adjusted siblings.

This was ok but wasn’t as great as their new rooibos blend Zingiber Ginger Coconut. For all the ingredients I really didn’t taste much besides a bit of chocolate. Still yummy though.

(Scratching that itch that the cocoamint tea couldn’t reach…)

Almost sip down on this one! I have one more serving left. I have enjoyed this tea in the past, but I won’t be sad to see it go and move on to other teas. I prefer drinking this with milk and sugar to give it a more decadent flavor. I read that it has chicory in it, but I have no idea what it looks or tastes like. I get mostly cardamon with some chocolate in the taste with the other flavors sort of tagging along. It is a nice warming cup, but not anything I’d buy again.