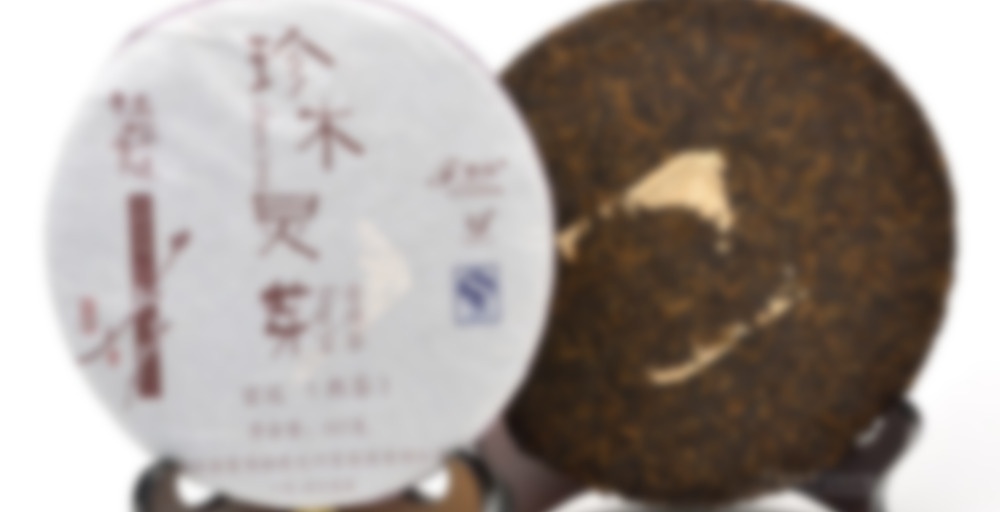 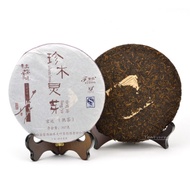 With a century-old history, abundant rainfall and sunlight, Yunnan owns a reputation as “South of the Colorful Clouds”. She feeds her people and the land they live on with her own stream. This time TeaVivre brings you Pu-erh lovers the ZhenMu LingYa, within which the passion of Yunnan Pu-erh people you can feel. This Ripened Puerh Cake Tea ZhenMu LingYa uses fresh leaves of Mengku arbor tree as material. The tea workers have years of experience in making Pu-erh tea. With their hands and professional experience, they made the fresh tea leaves into this beautiful ripened Pu-erh cake. Using the Mengku arbor tree of high quality as material, this ZhenMu LingYa has the pure and mellow flavor of ripened tea. You could see the golden pekoe covering on the dry leaves. As the cake was suppressed just fine in tension, you could enjoy breaking the cake——-By KitteyLovesTea

Taste: smooth and brisk flavor with a heavy taste above your tongue, sweet aftertaste

Health Benefits: Pu-erh tea has been touted for many years as a great weight loss tea because of its ability to help us burn fat and shed pounds, as well as having a deliciously mellow and deeply earthy flavor.

This is one of my favourite pu erhs to date. I have never had a ripe pu erh that is smooth and delicate. Don’t get me wrong it has a lot of flavour and it’s very deep and rich but it’s also refreshing and honeyed beautifully.

I need to order some more :) Check my previous steeping notes for a detailed review.

This was one of the free samples I received from Teavivre.

Writers’ Group meets at my house every other Thursday. On some of the first meetings, I hesitantly offered tea because I didn’t know if they would like it. They loved it, and now it is a very big part of group. We drink VAST amounts…so much that I got to use the new German phrase I just taught my daughter (we homeschool), “Ich muß pinkeln.” No translation needed, yes?

I asked one member if she had any special requests for tonight, and she said she wanted the tea that makes her tummy feel better. A couple of weeks ago she told me that she has a lot of digestive issues and usually has a lot of trouble eating meat as she just can’t seem to process it. Then she noticed that she could eat almost anything for several days each time we had tea together.

So tonight’s tummy tea was this! She and I sniffed the dry tea. She was a little scared as it had a really horsey smell. We both like shu puerh though, so she didn’t mind trying it. We actually steeped it western style in an 18 ounce pot, and I think we ended up making 6 or 7 steeps.

The liquor was dark, as in almost inky! It looked like I was handing out cups of coffee. Everyone looked a little scared at first, but everyone loved it. The horsey aroma was absent from the steeped tea and instead there was a nice, earthy puerh taste. The tea had a lot of body, which in a puerh comes across to me as a cedar flavored oiliness. It coated my mouth. There was little aftertaste, but a real sweet, smoothness following. The man in our group, whose wife is Asian and drinks more bitter greens that he doesn’t care for, remarked on the sweet, smooth taste of this, and said he liked how there was no bite at the end.

The first steep was about one minute but the second went much longer as I got distracted. The remaining steeps were all between one and two minutes. Even the forgotten steep did not get bitter or unpalatable. This is a very forgiving, very nice puerh, and I am glad my friend (Hi, Marshain!) is going to have a happy tummy for a few days.

Thank you, Teavivre! This was lovely, and I look forward to the remaining sample!

Its been awhile since I’ve had a pu-erh. I like to take some time with them since you can get so many steepings-16 for this one, according to Teavivre. So today, I have the time, and I’m motivated since my husband used my other sample yesterday, not realizing I was saving it for the right time. I start out in a conventional way using a gaiwan. Following the instructions on the website, I rinse 10 gms twice and start out with quick steepings, as follows: 10s, 10s, 10s, 5s, 5s, 5s, 10s,10s,10s,and 10s. I give my husband some of the later ones and he says, “Now that’s some good tea.” We’re in agreement on that. The first cups taste thick and rich, but all the steepings are nice. After ten 3-oz steepings, I do a final? two minute steeping for my husband with 10 oz of water, which he says still has plenty of flavor-so maybe we’re not done yet after all. The liquor is dark, the color of cola, with a pleasant earthy aroma. Sweet, earthy, and smooth are good overall descriptions, and importantly, there is no fishy taste, bitterness or astringency. So, for pu-erh lovers, or if you haven’t had pu-erh and want to give one a try, get a sample of this one. The pu-erh teas I’ve had from Teavivre do fine with either gongfu or Western style brewing.

Agree the puerh is good every day drinkable tea without odd flavors.

Another fine sample from the folks at Teavivre :)

The dry leaves are small and tippy with lots of golden buds.

The initial infusions come out very dark, the little leaves are very potent. Despite the dark brew, the tea is extremely smooth with an almost marshmallowy texture. It has flavors of oak and milk chocolate, with a very slight smokiness.

Around the fourth steep the brew gets a bit lighter, with more sweetness and a mellow flavor like yellow squash on the rich, woody background. Flavors begin to fade at the sixth steep. This is less than I usually get, maybe because of the tippy-er leaves giving off most of their flavor early on?

This is a mild and mellow pu’erh with a sweet, friendly taste, but to me it didn’t seem to have a whole lot of depth.

is it sheng or shou (sounds like a shou) and I wonder if it was kept in the best aging conditions…might have gotten flat?

Its a shou. Hmm maybe? What kind of conditions lead to pu’erh going flat? I hadn’t heard of that before, thanks

pu erh should be ideally kept at stable temp conditions that have even and gentle air flow, cool dry environment, and stored in unglazed ceramic wear that is porous like yixing pottery….they should be kept way from scented teas, herbals, and anything flavored or strong with natural essential oils….and any environment with heat and cooling fluctuations (like a kitchen, cupboard above a sink, sunny windowsill, spice cabinet, or area near a door or a air/heating vent…could lead to an imbalance in the conditions that allow for the natural bacteria in the pu erh to perish

Ahh, I knew about it picking up smells, but I hadn’t thought about the bacteria dying out. :)

Additional notes: I accidentally grabbed this sample instead of the Menghai I wanted to try. Now it’s gone! Too bad too since it is ADDICTIVE pu-erh and it isn’t even on the Teavivre site anymore. It’s really really delicious. Very smooth and sweet and doesn’t seem to have many of those negative pu-erh characteristics that seem to put some people off pu-erh. I will miss this one!

Thank you to Angel at Teavivre for this sample!

I must admit, puerh is not usually my favourite tea but I was interested to try this one. I didn’t hate it or love it. Earthiness with a slight sweet note is mostly what I taste. Maybe I was just having a blah day the day I tasted it, but I didn’t find it that interesting. I still enjoyed what I had, but don’t like it enough to order it.

I’m not sure that I get why people recommend drinking pu’erh if you’re used to drinking coffee. The brew sure has a very nice dark colour, but I wish it was more full-bodied. I like this but I really have a hard time describing pu’erhs so I can’t say a lot about it. It smelt a bit fishy at first, but I rinsed it for 45 seconds before brewing it and it got rid of the fishiness. Then I steeped it for 2 minutes in a mug with an infuser.

I got a solid 3 infusions out of this and I’m sure I could get more. It was very good iced with a little bit of lemon and sugar.

Maybe it’s in my head but I’m starting to believe the chinese myths about medicinal properties of puerh. It really quenched my thirst and I felt refreshed after drinking several cups. I wasn’t as hungry as usual in the afternoon.

I put off trying this a little while because I’m like that when it comes to pu-erh. It’s something that’s sort of a conditioned response for me. But I’m glad I finally got around to finally trying it.

it was OK. but i did not know i had to discard the first steep (infusion) so it tasted like trees and shrimp. I’ll be sure to do it right next time

Very dark red almost black cherry in color. Pleasing woodsy aroma. It is surprisingly light in taste, the dark color threw me a little. It has a sweet oak flavor. Not much complexity to this tea, but it is light and enjoyable.