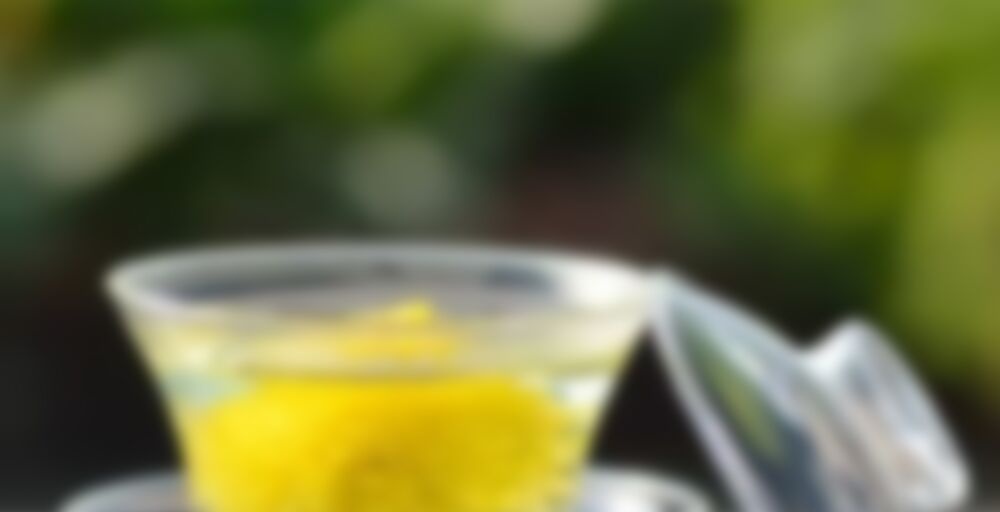 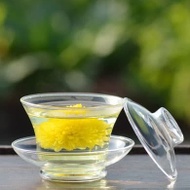 Our Huizhou Huangju tea (Chinese: 徽州皇菊) is the best of the best – grown in high mountain ranges (1,400 m) far away from traffic and industry pollution and hand-made with traditional procedures (sun–drying and baking) – the premium quality of this tea is assured from the start to finish. The single-headed golden flower disc of Huizhou Huangju is larger than that of other ordinary varieties. It is a marvelous experience to watch the whole process of chrysanthemum unfolding slowly till in full blossom in boiling water and smell the slight chrysanthemum fragrance floating in the air. Bedsides, Huizhou Huangju is excellent for drinking in both winter and summer days.

I used two flowers for one 12-ounce mug of tea.

Ahhh, chrysanthemum. Such a cozy and comforting tea, and really an autumnal flavor to me. I love the nectarous honey-sweetness paired with soft hay and hints of menthol, herbs, and pepper. Such an interesting combination of soft, sweet, and more savory aromatic notes. It has a slightly thick, viscous mouthfeel as well that makes it somehow more satisfying to sip on.

It makes such a cozy before-bed cuppa. Happy that I still have a few other samples of different chrysanthemum tisanes from Teavivre to sip through! :)

Received a sample from teavivre! I was surprised at how small the flower was – I certainly expected it to be more than 1inch in diameter. However, the tea brews up light and floral with warm honey notes. Definitely a very relaxing a calming flavor. I would be curious to try the cheaper, lower quality versions to see how they compare.

When I bought this I thought I was getting 15 Tea Bags. That is not what I got. Each “teabag” was one loose chrysanthemum flower. I used five flowers to make one 16 oz cup of tea. Basically this tea is a rip off. The flavor is good, tastes like apples. I still don’t recommend this tea because it is not as sold.

I think that the point here is that Chrysanthemum tea in Traditional Chinese Medicine is a curative tea used for specific complaints. This particular flower is of very high quality, as compared to the possibly lower grade chrysanthemum flowers for tea found in Chinese pharmacies. This particular tea is packaged one flower per package because that is all that is needed for a curative and endless cup. Further, this flower is dried in such a way as to bloom in the cup, adding aesthetic appeal to the curative element. The flavour is light but healing.

IMHO, your experience with the tea is a cultural misunderstanding.

Interesting insight, Evol. It does make sense that a company like Teavivre would know what they are doing if they purposely packaged and marked their tea as they did.

Thanks for @Evol Ving Ness explanation.

Indeed, this huangju is the best of the best, which grows in high mountain ranges (1,400 m) far away from traffic and industry pollution and hand-made with traditional procedures. Compared with other ordinary varieties, it has a larger apperance with golden color and wonderful taste.

I’m sorry that the information on our site gave you a missunderstanding. I’ve already added some extra information to make it more clearly. Here is a brewing guide may helps you:

Sorry again and we appreciate for your understanding.

Ah, autumn! I am loving the weather, it is cool and crisp, the leaves are turning, and there are pumpkins everywhere. Also skulls. This Halloween skulls are super in, and I am fighting the urge to buy up every piece of interesting skull decor for my tea desk and future wedding, but it is hard! The hunt is, of course, still on for the perfect ‘spooky’ piece of teaware from the thrift stores, no luck yet!

Today’s tea will always make me think of the Tang Dynasty, mostly because of the movie Curse of the Golden Flower (or Curse of the Golden Corset as I call it) because they really had an obsession with Chrysanthemums. The movie, while beautiful, is certainly not one of my favorites…but the Tang Dynasty will always be my favorite period of Chinese history, rivaled by the Three Kingdoms Period of course. This really has nothing to do with anything, save a love of an aesthetic, so without further ado, Teavivre’s Huizhou Emperor Chrysanthemum Tea! A beautiful single blossom individually packaged, it made me feel like royalty with the presentation, it also meant that the risk of the flower being crushed into oblivion was minimal which is always nice. The aroma of the flower is very lovely and pure, as though I have a fresh chrysanthemum sitting next to me. Trying to describe the aroma is a challenge, because it smells like chrysanthemums, describing tea is easy since it almost always has notes of other things, but for some reason this particular flower has always challenged me. I will try, assuming the reader has never sniffed one, to find a comparison. There are notes of daisy, wild flowers, pollen, lettuce, white pepper, straw, and gentle almost creamy sweetness. It smells like autumn and nostalgia, a very happy smell for me.

Now I could have gongfu’d this flower, I have thrown many a chrysanthemum into a gaiwan and steeped as such, but since this one is so special I thought I would go for a clear cup and just let it float around while I sipped it. Again, talk about feeling like royalty, there is something very princess like about drinking a cup of flower. The aroma is much like the dry flower but stronger and sweeter, it lacks some of the more potent sharp notes that some yellow chrysanthemums (especially Tai Ju, which are mostly buds) have.

In Traditional Chinese Medicine, chrysanthemum has quite the reputation for being a cooling herb, it is also one of the few medicinal herbs I drink not just for taste but for its usefulness, especially this time of year. I am not sure which of the chemical compounds in this flower it is (because of course the internet has conflicting info and I no longer have my books on TCM) but one of them does wonders for sore throats and as an expectorant, making it a must have around during allergy season. It also settles my stomach so I drink it after big meals or before bed, granted I am not one to recommend medical stuff since my body is super weird (and they do not help Ben’s allergies at all) but it is an interesting bit of trivia. Plus it helped me pass the time waiting for the flower to steep!

The taste and mouthfeel is fantastic! Like a chrysanthemum flower should be, the texture of the liquid is thick and slippery, coating my mouth in a nice cooling sensation, like the world’s mildest Biotene mouth spray. Honestly the texture reminds me of that as well, but with no mint to be found…which is completely fine with me! Some chrysanthemum flowers are very sweet, others are very pungent and medicinal, this one is way on the sweet spectrum. None of the sharp more medicinal qualities are really present, just the wonderfully sweet nectar of fresh golden chrysanthemum. With notes of honey, pollen, wildflowers, daisies, straw, and a lingering aftertaste of sugar.

One fantastic thing about this single flower that really struck me was how many refillings of the cup I could get before it finally faded out, it has some great resteep value going on. I got four very flavorful cups and at least three more very mild but pleasant ones. At first, when looking at the price, I thought it a bit too steep for my blood, but after seeing how much life I could get out of it I realized it was not bad at all. Plus, taste aside, part of the price does come from the spectacular presentation, it looks spectacular while steeping. I found it so lovely that when I had sucked every bit of flavor from the blossom I stuck it in a different cup of tea just to extend the visual enjoyment.

For blog and photos: http://ramblingbutterflythoughts.blogspot.com/2016/10/teavivre-huizhou-emperor-chrysanthemum.html

Taste: I want to start off with saying how pretty the packaging was for this a yellow packet w/ a clear view decorated circle featuring the flower in the middle. when picking this tea apparently i didn’t look at the packaging online since i had no idea it would look like this lol. This was the first time i had brewed just one flower for a cup of tea, although in the past i have tried the larger blooming flowers balls which are huge in comparison. As for taste it was a very light. Overall not a bad intro back into tea after not drinking any for a little while.