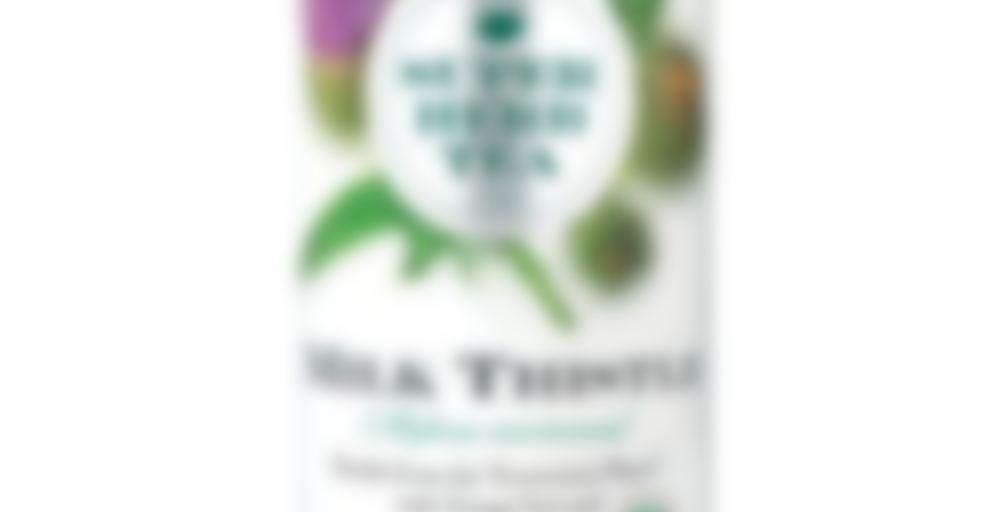 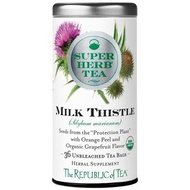 by The Republic of Tea
75
You

Our Minister of Herbs continually searches the globe for “wonder” herbs unique in flavor and functionality. While unknown to the Western world, many herbs have been nutritional dynamos in the local region’s daily diet for centuries whether for boosting performance, strength or longevity. Now, these SuperHerb Teas can be an easy part of your daily wellness regimen.

Milk thistle is named for the “milk” that exudes from the leaves when they are cut, but it is the seeds that have made their mark as an herbal remedy. They contain a compound called silymarin, which has been used for over 2,000 years in European cultures to help protect the liver from toxins.* Milk thistle has also been used as a hangover remedy and to help increase breast milk production.* Orange and grapefruit notes are added to create a bright and cleansing cup.

Steeping Instructions
Steeping herbal tea is easy. Simply heat fresh, filtered water to a rolling boil. Then pour water over tea and steep for 5-7 minutes if using a tea bag or full-leaf.

A freebie teabag from the 2018 San Francisco International Tea Festival. I’m having a horrible migraine today and thought something like this would be fairly inoffensive since my GI goes cray-cray at the same time my head goes boom. I couldn’t rip open the outer package to the teabag and had to get the kitchen scissors, which cut the top off of the interior teabag, so I had to empty all the contents into one of my own fillable teabags, which was slighly more effort than I wanted to put forth while feeling like this, but meh. It was done and the tea was steeped.

I really just smell grapefruit and orange zest coming off the cup. That is mostly what I taste, too, but then, I’ve never had milk thistle and am not sure what it should taste like. The grapefruit is a lot lighter tasting than I usually get when it is used in teas, and I really like that (I’ve started to warm up to it as a flavor presense as of late, even though I don’t care for the plain fruit). It’s like there is a light, milky, slightly floral/herbaceous note that was tempering the grapefruit from being too abrasive, and it actually worked really well. If I was going to drink a grapefruit-flavored tea, I actually think this would be my choice. It’s coming off a little more as a generic citrus zest note, but very pleasant.

Ya… I dig this! Not something I’d ever think to try so I’m glad I got the chance to try it!

I remember enjoying this freebie from the fest 2 years ago. Feel better, MA.

Milk Thistle can be very bitter, as it is used as a tonic/detox for the liver. The bitter herbs, like yarrow, angelica, burdock, dandelion, mugwort and so on, stimulate the vagus nerve which controls heart rate, digestion, blood pressure and the immune system. Sounds like you got a very mild amount of it, as the tea sounds quite drinkable.

Somewhat astringent with grapefruit flavors. I tried it warm and as iced tea, and surprisingly, I like it warm better. More of a delicately flavored herbal.

This one sounds really nice.

I really enjoyed the sample teabag I received but have never been able to find the tin in stores.

Hi derk, I bought it a couple of years ago at a grocery store in the Minneapolis-St. Paul area (Kowalski’s). They carry a large range of Republic of Tea products. I don’t think I’ve seen it elsewhere.

Hi Shae, it’s good but I have had better teas. I don’t think it’s available anymore, but I’m not certain about that.

Liked the sample enough provided at the 2018 SF Tea Fest to buy a tin last year when I saw it at a local market. Finished off the 36th bag this morning after hitting this herbal tea hard for the past few months.

I really like the way the grapefruit flavoring and orange peel are tempered by the thistle latex milkiness. It’s a very gentle drink that suits early mornings as well as it does late nights. Delicious hot if you’re into this type of herbaceous profile. I’ll probably buy another tin.

This does sound nice. I like my citrus toned down with something sweet-ish or milk-ish.

You always comment favorably on the teas I’ve just sipped down. That makes sending you samples difficult ;P

I remember this one from the 2018 San Francisco International Tea Fest sampler baggy. I was surprised I liked it so much, because I don’t normally like grapefruit. It’s a good one!

Oh dang, that was 2018?! Edited appropriately. Glad somebody around here has a sharp memory! I feel like this tea could appeal to a lot of people because of the softened grapefruit note. Kiki, though, no way. She found it revolting and wouldn’t finish the cup. So, polarizing maybe?