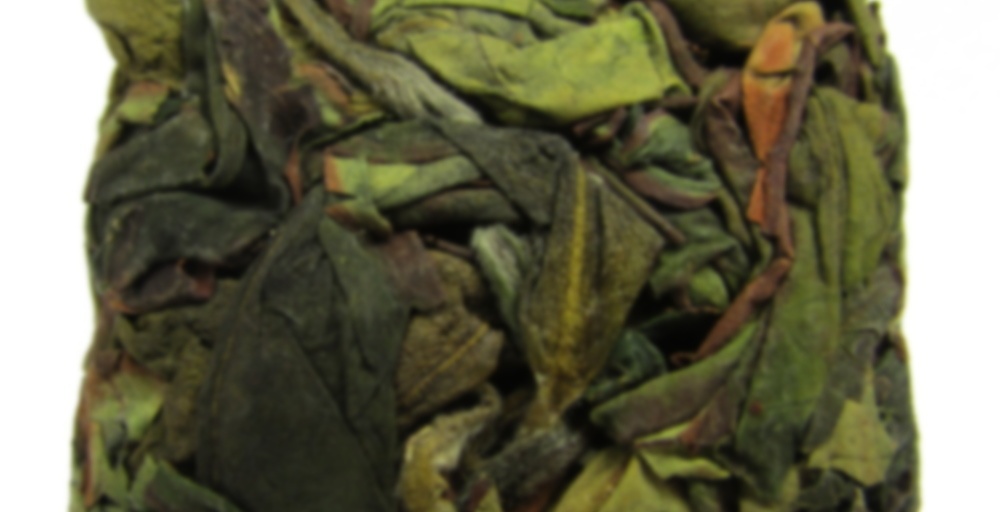 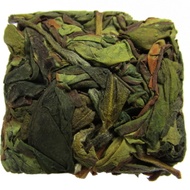 The top grade of Zhangping cake produced by the factory, it has a smooth refined floral taste which lingers in the mouth and develops with subsequent steeps.

Zhangping Shui Xian is the only oolong tea which has traditionally been pressed into a cake, a practice which dates back for well over a century.

Each cake is roughly 7.5g in weight and comes in its own individual packet.

I recently came across several of these What-Cha Zhangping Shui Xian mini cakes while organizing my tea hoard and realized that I should probably get a move on and drink them while they were still good. I had at least two of both the Light Roasted Shui Xian “Fruit” Cake and the Light Roasted Shui Xian “Premium Floral” Cake, but only one of this one, so I went ahead and drank it earlier in the day. Depending on how I feel later, I may have one of the others. Though I have little experience with Zhangping Shui Xian, I have never been huge on it, thus I am trying to get through these things as quickly as possible so I can move on to something else. This tea was pleasant, but it was also very subtle and not as overtly floral as I was hoping it would be.

Prior to the rinse, the dry tea cake emitted aromas of cream, butter, custard, and gardenia. After the rinse, I noted new aromas of vanilla and steamed milk backed by a subtle scent of grass. The first infusion introduced very subtle orchid, almond, and cherry aromas. In the mouth, the tea liquor offered delicate notes of cream, butter, and grass that were chased by hints of custard, vanilla, almond, and gardenia. Subsequent infusions introduced a stronger almond aroma as well as cinnamon and ginger scents. Slightly stronger vanilla, almond, and gardenia notes appeared in the mouth along with subtle cherry, orchid, and steamed milk notes. New impressions of sugarcane, minerals, orange, ginger, cinnamon, banana leaf, and honey emerged along with some fleeting hints of coconut. The final few infusions were very heavy on mineral notes, though I also found impressions of cream, vanilla, sugarcane, and grass as well as subtle almond, honey, steamed milk, cinnamon, and ginger accents.

The vast majority of my experience with Shui Xian has come in the form of the more common and celebrated Wuyi oolongs, so this was a real change of pace for me. The way this tea was processed brought out aroma and flavor components that I usually associate with Taiwanese baozhong, various Dancong oolongs, and some of the lighter roasted Anxi oolongs. Honestly, I would describe this tea as having much more in common with any of those types of tea than any of the traditional Wuyi takes on Shui Xian. Its uniqueness aside, I am afraid that I cannot give this tea a spectacularly high rating. Though pleasant, it was a very subtle tea, consistently emphasizing its sharp, mineral-heavy texture over its aromas and flavors, and as I have mentioned in the past, I tend to favor strongly aromatic and flavorful teas over subtler, more texture-heavy teas. This tea firmly fell in the latter group for me. Another gripe I had with it, and one that I kind of hit on earlier in this review, was that for a tea that was designed to showcase floral aromas and flavors, it was often not all that floral. Very frequently its floral components were subtle. They often took a backseat to the tea’s savory, sweet, vegetal, and spicy qualities. Still, all gripes aside, I would imagine that people who tend to favor highly textured teas that require patience and consistent focus to appreciate would be into this one. Unfortunately, if the other Zhangping Shui Xian mini cakes I have end up being very similar to this one, I think I will probably stick with Wuyi Shui Xian and some of the Dancong Shui Xian oolongs going forward.

Tumbler Test: It did well. Actually, it performed better in my tumbler today than in my gaiwan. I used less leaves, maybe 2 grams in a 16 ounce bottle, and the florals came in through nicely without a gassy edge. The florals were less pronounced gong fu in the Gaiwan, and the liquid was way too dark for me personally. I am not sure what I did wrong. I used 180 for the temperature, which typically works for me fine, but it was floral-high headiness-then flat inky stuff. I’ll continue to play to see what else I did wrong. I’m still super curious about how the other one compares never mind the description for the other Floral was basically a comparison. I also need to review the teas on What-Cha’s site eventually…