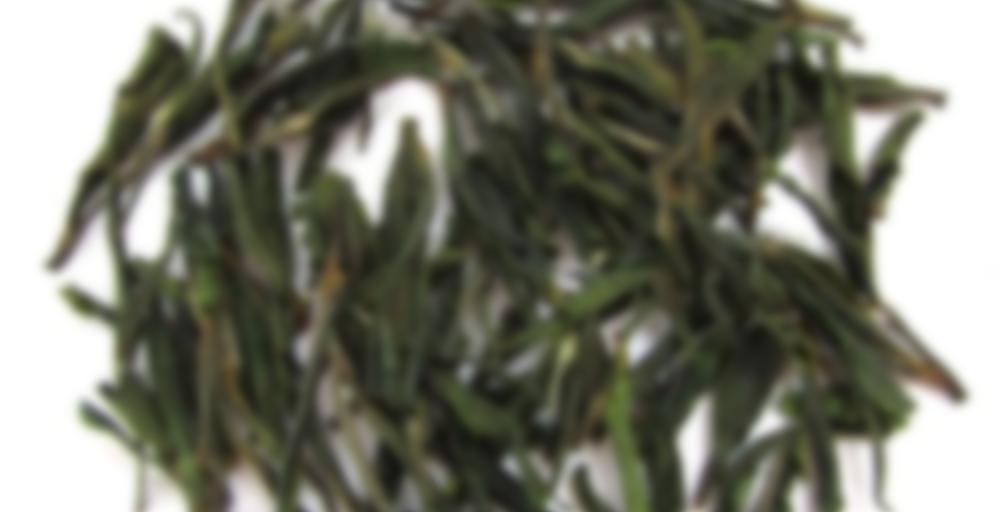 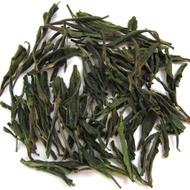 A refreshing green tea with a sweet delicate taste of lime and green olives with gentle floral notes.

A sample from derk – thank you again.
Oh, this is green tea. And evening. So, hot water (boiling, but rested few minutes).
Gong-fu.

1st – 30 seconds. In taste it is good, smooth, bit salty, bit zest too. A lime zest! Better than lime beer I had in Saturday.

But it is nice overall!

2nd – 45 seconds.
I like the colour. Yellow-green, clear, with nice aroma of green tea. I wonder what it is actually. But I do not care.

This tea is lovely, I just do like it. And as I am bit more tired than I would like to, this tasting note is blah; I know.

I will do better with other brews I will make. Still have some left. No rating yet.

In all the reviews I’ve read over the years, I’ve never seen “olives” used as a taste comparison. But I think that’s a spot-on comparison to some green teas!

Hehe, it was kind of salty green taste. It reminded me olives. Maybe we have here shitty olives.

Maybe my new favourite green. I’ll review again after a few sessions, but I like it. It’s conceptually like Dragon Well Long Jing for me, but more of the specific tastes I like. More hay, more butter. And with a thicker, syrupy feel.

Edit: I brought this from an 85 to an 80 because it strikes me differently on different days. Also subsequent steepings fall off quickly. But it’s still a marvellous tea, solidly 80.

Edit: 80 up to 82 after a marvellous four-steep session. That’s now settled. Definitely.

Those of you who read my reviews are well aware that I am a huge What-Cha fan and review a ton of their offerings. While I am almost always impressed by the quality and tastiness of their offerings, what gets me more about What-Cha as a vendor is their willingness to highlight rarer and more experimental teas. Alistair always seems willing to give a unique tea a chance to reach the Western audience, and I greatly appreciate that. That being said, this tea is another of What-Cha’s experimental offerings. It is a Darjeeling green tea produced from the Japanese Yabukita cultivar that has been processed similarly to a Chinese Bai Cha green tea. That’s right; this is an Indian green tea produced from a cultivar generally used in the production of sencha processed to emulate a specific type of Chinese green tea. Weird? Sure. Tasty? Actually, yes.

To be honest with all of you, I had no clue how to prepare this tea. I do not drink much sencha these days, have very little experience with/knowledge of the unique qualities of the Yabukita cultivar, and prior to trying this tea, I had never tried a Darjeeling green tea. Part of me was tempted to brew this tea similarly to a sencha, though the tea was clearly not processed in that manner. I tried gongfuing the tea at 176 F, and while the results were mostly tasty, the liquor eventually turned a little more lemony than I wanted. Ultimately, I decided to go with a low temperature gongfu preparation for my primary review session. Following the rinse, I steeped 6 grams of the loose leaf and bud mix in 4 ounces of 158 F water for 5 seconds. This infusion was followed by 14 additional infusions. Steep times for these infusions were as follows: 7 seconds, 9 seconds, 12 seconds, 16 seconds, 20 seconds, 25 seconds, 30 seconds, 40 seconds, 50 seconds, 1 minute, 1 minute 15 seconds, 1 minute 30 seconds, 2 minutes, and 3 minutes.

Prior to the rinse, the dry leaf and bud mix produced aromas of hay, green olive, honey, and malt. After the rinse, I detected an even stronger green olive scent along with new aromas of butter and grass. The first infusion introduced a clear mineral scent. In the mouth, the tea liquor presented delicate yet lively notes of butter, cream, hay, honey, malt, minerals, grass, and green olive. Subsequent infusions introduced scents of lemon, dandelion, dandelion greens, umami, turnip greens, and seaweed. New notes of lemon, umami, dandelion, turnip greens, seaweed, dandelion greens, peas, and lettuce appeared in the mouth along with hints of spinach. By the end of the session, the tea liquor was still offering somewhat faded yet clear notes of minerals, green olive, grass, and peas that were chased by hints of dandelion greens, lettuce, umami, and dandelion.

Rohini is one of the Darjeeling tea estates that not only seems very willing to try new things, but also rarely if ever disappoints me. Though this offering may have been odd and subtle, it was very sophisticated and satisfying. The texture of the tea liquor was fantastic and the layering of flavors was fabulous. An impressive tea all around, I would have no issue with recommending this one to anyone looking for a unique, challenging, and highly enjoyable Indian green tea.

P.S. After conducting my gongfu review session, I had enough of this tea left to play around with, and at one point, I opted to try to brew it Western style, though I also decided to vary the temperature a bit as I went. I ended up steeping 3 g of loose tea in around 8 oz of 158 F water for my first two infusions. I then conducted a third infusion at 163 F, a fourth infusion at 168 F, and a fifth and final infusion at 176 F. Steep times for the infusions were 30 seconds, 45 seconds, 1 minute 15 seconds, 2 minutes, and 3 minutes. The results I got were pretty similar to the gongfu session detailed above, though I did note a few different aroma and flavor components here and there. This time I noted some sweet corn on the nose and in the mouth starting with the first infusion. The second infusion saw some hints of radish come out in the mouth. From the third infusion on, there was saltiness on the nose and in the mouth. It was a very marine saltiness too, reminiscent of sea salt. The final infusion saw cream come out both on the nose and in the mouth. Otherwise, I got all of the same aromas and flavors as the gongfu session.

Agreed. Alistair’s offerings are just lovely, for the most part, and I appreciate his search high and wide for tea delights off the beaten track to expose those treasures to a larger audience. Also, he is super delightful to communicate with regarding individual tastes and the teas that might just appeal. That said, my making a new what-cha order is way overdue. Need to get on that.

That’s a weird style tea for sure, and one I’m totally down for. Like Evol Ving Ness, I need to revisit What-Cha.

And here’s another sample from derk ♥
This one is very light, smooth and fairly thick (for a green tea). I didn’t pick much in the smell, but that could very well be due to the fact that it’s from 2017 Autumn pick. The taste is a mix of savoury and sour, the notes like olive and lime mentioned in the description are present for sure. Like derk, I also find it hard to describe. My favourite aspect of the tea is probably the drying and vegetal aftertaste, which is very pleasant. Overall, I think it’s an ok tea that I wouldn’t mind getting at some point. However, I feel like it’s a little pricy for what it offers, I suppose as a result of being from Darjeeling.

I wasn’t going to review this again but I finished up the last of the 25g sample and noticed some changes that could be attributed to my developing tastes or the tea changing from sitting in a non-airtight tin. The leaf is not as bright as it was fresh, which is expected. I also brewed a small amount gong fu side by side with my western cup.

This time around I didn’t pick up on the olive. Rather, it moved toward a really weird tisane I’ve had before, Numi’s Dry Desert Lime. Don’t let the reviews of that tea scare you, as it was certainly different than this one, but now I’m picking up on that kind of dried desert lime, a little bit of an earthy tartness. This tea is still as refreshing and bright as the first time I had it, though less floral. The minerals are very much present in mouthfeel but not in taste, creating that very vibrant feeling. Kind of like a salted citrus, but focused mostly on the side of the tongue and salivary glands.

I thought I’d have a little go at gong fu just because. The first three steeps were light and tasted similar to a pickle or pickled leaf. After that it, it thickened up and tasted more like the western brew with still light but more pronounced floral.

I’m not sure somebody else would rate this as highly as I do, but It’s just such a clean, delicate, easy tea to drink tea that has no hint of grassiness nor does it upset my stomach. It’s very non-dominating and somehow works despite my preferences for bold tastes. I like that it’s hard for me to describe, yet I don’t feel annoyed that I’m searching for a way to do so.