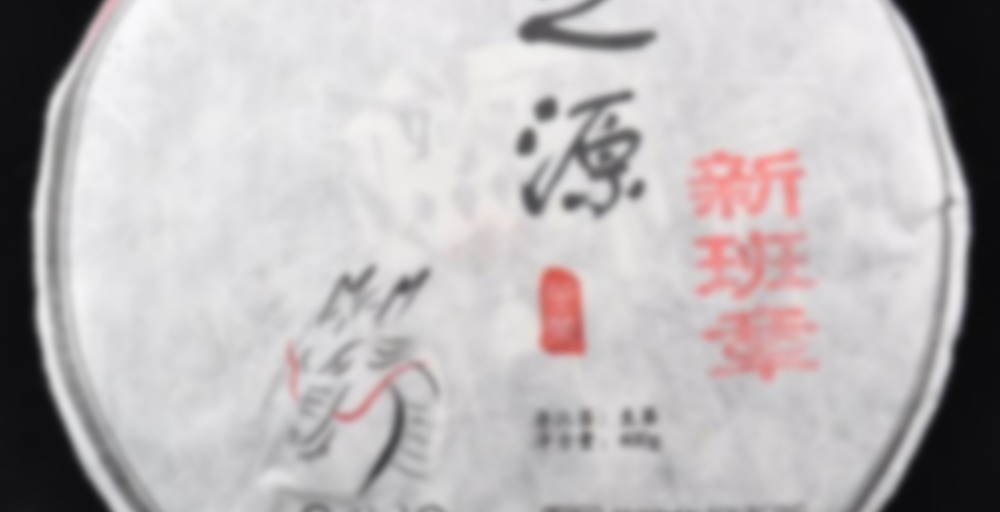 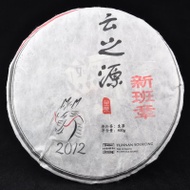 First flush of spring 2012 material from 60 to 100 year old wild arbor tea trees growing in Xin Ban Zhang village. Xin Ban Zhang is the neighbor village to Lao Ban Zhang and the tea from here shares much character with Lao Ban Zhang tea. The bitterness is a bit more persistent with Xin Ban Zhang. The leaf structure, mouth-feel and aroma is much the same. An intense cha qi accompanies the drinking experience. This intensity is the perfect fuel to transform this tea through the years.

Stone-Pressed in the traditional manner

Bought a sample of this. This tea is a gut buster. It is bitter and kicks like a mule. It hurts so good.

Flavor: Wet leaf smell is super skunky. I honestly can’t remember much of the flavor because the Qi was so awesome. It is similar to 2012 mu shu cha but that has more flavor nuance whereas this has more energy with a little less relaxation.

Qi: Tons of energy but also very relaxing. It makes even the most strenuous hike seem effortless.

Decided to start this session at about 1am last night – randomly grabbed the sample without really knowing what I was getting myself into. This is a pretty hardcore tea. I used my whole 8.7g sample I received many months ago from LiquidProust in a 120mL gaiwan with boiled water. The dry leaf smelled lightly grassy and fruity, while the rinsed leaf had a pretty intense tobacco aroma.

The first steep was rather light, as I had a pretty solid chunk in the gaiwan, but it carried very sweet apricot and sugary notes, like I was drinking a fruity hard candy. I was hit immediately with some heavy qi in my chest. It left my tongue tingling and a very sweet flavor in my mouth.

The next steep was similar, though a bit thicker with an almost juicy kind of character. I also started to notice a slight cooling sensation in my mouth with this steep – no menthol or camphor taste, just the cooling feeling.

In the next steep, my big chunk really opened up, and I finally got a bit of the smoky tobacco flavor I smelled on the leaf. It wasn’t overwhelming however, and the tea still had that sugary sweet apricot sweetness with mouth tingly goodness. At this point, I was feeling pretty energized and started to get all sweaty. The fourth steep started to get a slight bitterness in the front of the sip, which was quickly washed away by the intensely sweet huigan. I was feeling some tightness in my chest, and my head started to swim a little bit at this point.

For the next three steeps, the bitterness really reared its head – and it was just bitterness, not astringency. It was a bitter flavor that I’d describe as herbal or medicinal, and for these steeps the sweetness was not quite as intense, though it was still present. At this point I had to call it a night and get to bed, as this bitterness did not sit well with my stomach so late at night. I think I would have been able to soldier on if I had been drinking this tea at a more sane hour and hadn’t eaten a ton of crap at a halloween party earlier in the day, but the energy this tea had and the bitterness just mixed up in my belly and made it sad.

I picked the session back up this morning, and it had that familiar bitterness, by this point a bit subdued – it also retained that intense, candy apricot huigan. A couple steeps later, the bitterness started to recede and the tea started to taste almost buttery with an apricot finish. This continued for three steeps.

The last five or so steeps were much softer and thinner in texture. There was no bitterness remaining, just some soft and sweet flavor with a bit of mouth drying.

This tea is STRONG in almost every way a tea can be. The body was good but not particularly amazing, but other than that – strong flavor, strong bitterness, crazy strong qi. It was an intense tea – I wouldn’t recommend trying to drink it at night like I did. I’m glad I got to try this tea. I wish I could have had it all in one session, as I feel like I missed out on a little bit of the teadrunk face-melting qi I could have experienced in an uninterrupted session, but this was an awesome tea regardless.

Drinking this at work and the one major thing I notice is how beautiful the leaf is. Many two leaf and a bud with stem attached. Unfortunately the nicely picked leaf doesn’t have a deep taste or anything unique to offer. Very thin and very light tasting. I steeped this at 15 seconds and still no major difference. Easy to sip at but no feelings and I’m unsure if the caffeine does anything with this one

This is one of my very favorite teas. Incredibly complex, with notes of white grapes, fresh leather and sweet grass. It is thick, has light bitterness and an enduring fruity/flowery fragrance in the throat (which sounds weird to say). My only complaint is that the initial flavors don’t last much longer than five steepings, but then there’s plenty of grass/mineral/bitterness from six on.

This is a nice loose compressed cake that broke apart easily. It has a slight mineral taste with a touch of bitterness on the tongue. It has a very thick mouthfeel to it that is followed by tongue tingling after drinking it. I have done 9 infusions so far and it is carrying on well. A pretty nice young sheng with a nice floral aroma.

Perhaps I will sample this tea =)

Yeah I got a sample size used about half of it. I may get some more of this and stick it away a year or two/

How do you think it will age? Bulangs are among my favourite to drink and stash!

Not sure since this sheng thing is kind of new to me. If it has already lost some of that bitterness people associate with it. Should age well if that is any indication.

For got this has some nice leaf in it. Not chopped up.