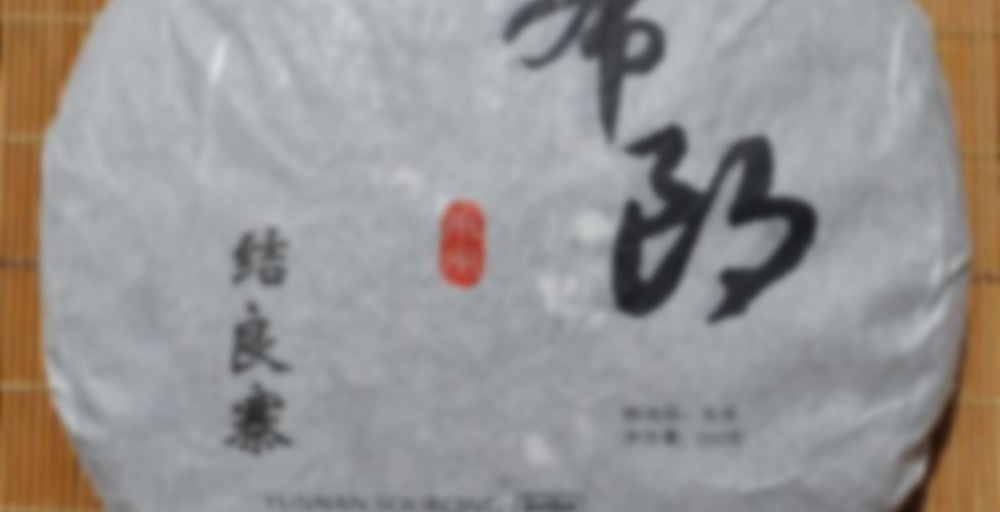 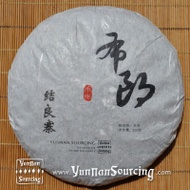 This tea cake is made entirely from spring 2010 Jie Liang Village tea! Jie Liang is a Bu Lang Mountain village about 10 miles west of Lao Man’e village in the county of Menghai. Jie Liang tea is also bitter but with a sweet and full after-taste and a protracted mouth-feeling. It is an incredibly energetic tea with tons of character and depth. This is a tea we are confident will age well!

This is the lone sheng pu’er sample among the massive pile of ripe samples in my recent Yunnan Sourcing order. I’ve never seen Jie Liang talked about anywhere else, but Scott mentions it in his descriptions for the Lao Man’e teas on his site. He describes it as being very similar to Lao Man’e, though even more intensely bitter. Since Lao Man’e is my absolute favorite tea, I naturally simply had to try this tea out.

For this session I used my standard setup of 7g in my 100ml Yixing jiangponi gaiwan. I used a single intact piece, which meant the tea would start off a bit more slowly, helping control the potential intensity. The rinse and the first couple infusions were quite thick and incredibly sweet. There was virtually no bitterness, but I could sense an underlying potency waiting to be unleashed.

Once the chunk had properly come apart, the expected intensity did indeed arrive. The tea was intensely bitter, but you could tell it had mellowed out quite considerably since its youth. For a seasoned Lao Man’e drinker such as myself the bitterness was perfectly palatable, but for those more faint of heart the tea could certainly still be too overwhelming. The bitterness is very persistent lasting for a long time, but unlike most bitterness of such kind I didn’t find it unenjoyable at any point during the session. The bitterness is accompanied by an almost equally intense sweetness and an underlying fruitiness completes the tea. The fruitiness is reminiscent of the grapefruit note I get in Lao Man’e yet not quite the same.

The tea has excellent longevity and I would highly recommend sticking with it till the end as the 2 min. infusion was actually my favorite of the session. In the late extended brews the bitterness and intensity start to die down, which reveals the more subtle and nuanced aspects of the tea. In addition to the aforementioned fruitiness, I noted a different kind of character which helped set the tea further apart from its cousin Lao Man’e (at least the young teas from there). The lack of association makes it difficult to describe, but it was a nice quality nevertheless.

I ordered this sample purely as a curiosity. Since I own two different vintages of Lao Man’e gushu, I never expected to even end up considering purchasing a cake of this tea. At first I wasn’t sure what to think of the Jie Liang. While it does still have quite a bit of intensity left in it, I do prefer teas that have plenty of kick to them, so for my tastes the tea has mellowed perhaps a bit too much even. Early on the similarities with Lao Man’e are also so plentiful that one must ask is there any point in having both. But over time the tea does reveal its own unique character distinct from Lao Man’e, making it worth existing and experiencing.

What sealed the deal for me was the cha qi. During the session I experienced very little qi, but then half an hour after I’d already stopped it suddenly caught up with me. I suddenly had a massive headache, my face felt like it was melting and I was all wobbly. It’s been a while since a tea has made me so tea drunk. While not necessarily purely enjoyable, the qi was very fitting for a tea like this and most certainly elevated at least my experience with the Jie Liang. While the headache and muscle pains faded, I was left energized for the rest of the day.

So now I want a cake of this tea. The price is certainly quite high, but very reasonable given the quality and age. A young Lao Man’e will set you back about as much, and we’re not even talking about gushu. I would consider this tea to be really early in its semi-aged stage, but it has a good head start and will hopefully develop into something even more interesting in another five to ten years. Personally I still prefer Lao Man’e, but I’m now a fan of Jie Liang as well.

Edit: I just realized my gaiwan is actually 120ml, not 100ml. I had it right initially, but seems I’ve been confused about that for many weeks now. It’s not a huge deal, but I’ve been slightly under-leafing my teas per my own standards. Good thing I caught that.

There’s nothing like your face melting and saying “I want a cake of this”. haha

Started out with a thicker mouth feel which was good. Not too much of the Bulang kick to it, but I suppose this is 7 years old now so that’s to be expected. As it sits now this tea is good, but a bit caught between stages. I think this will be great in a few more years and wish I had more than just the 5g sample.

I forgot to submit this note yesterday and it got deleted, but I didn’t get to steep the tea for too long, so I saved the leaves to continue with today.

Yesterday’s steeps mostly brought forth woody flavors with a nice, thick mouthfeel. There was some bitterness at the beginning, and every session was quite enjoyable.

Today’s steep was sweet from the start. A bit less thick, but still nice and smooth, with no bitterness or astringency. Finished up with a long steep, in which the thickness returned. Definitely enjoyed this one!

I’m going to refrain from rating this tea because I think I may have infused it incorrectly somehow. It was overwhelmingly bitter for me from the first cup. I did enjoy the flavours beneath the bitterness, however. Perhaps my water was a little hotter than I thought, or my ability to measure time without a clock was faulty and I over-stewed the leaves. If I had more than a sample I might try with a lower temp and / or shorter time.

Brewing this up as I have been retasting a lot of stuff in storage .
I brought this one out and picked 10 grams off to start with. I warmed my Shiboridash and let the water out I tossed the dry leaf in and swirled it around. The aroma was a bit of the heavy tobacco to the nose. I gave it a rinse and let it sit a bit before brewing. The aroma is woody and sweetish in the cup.
First infusion, it has some of that thick almost bitter that belies its BuLang source. The color is a nice light amber in the cup. I sit back and let the tea rest in the mouth . The thickness and tobacco come to the front. A little mineral and a whisper of some smoke.
I have had some BuLangs that will smack you in the chops. This one is a bit more tame. It may even be one you could introduce a newer drinker to the BuLang area.
Later steeps carry through. I let this one cool a bit and it became almost sugarcane sweet.

I’m on the hunt for a shibo at the moment. They seem a lot less cumbersome than regular gaiwans. Is yours glazed?

@tanluwils it is. I got it from Greenwood Studio on Etsy.