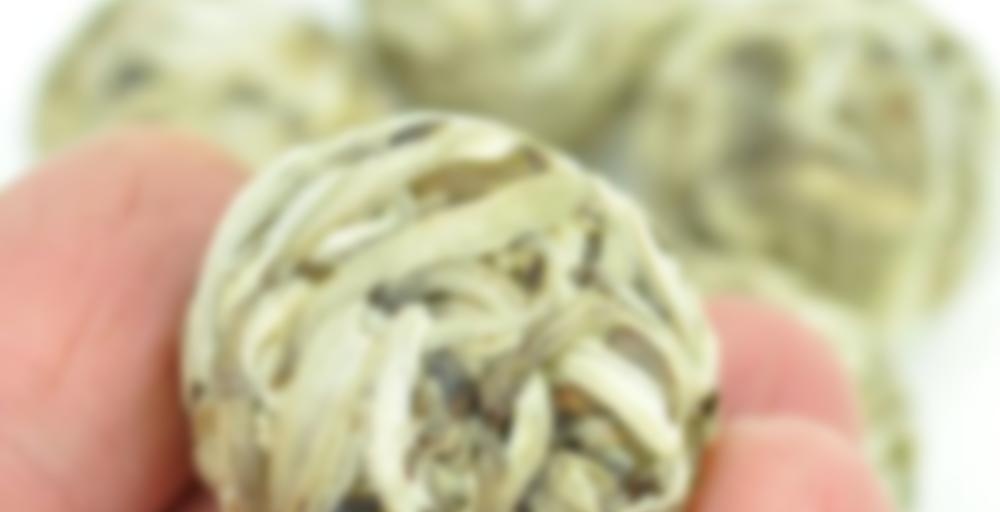 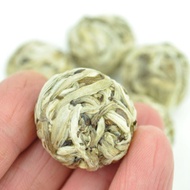 Slight cinnamon spice aroma when brewed. Thick and sweet. Very lubricating mouth-feel that stays in the mouth after drinking. Brewing tip: Use 90c water and keep infusion times short for the first 3 to 4 infusions. Can be infused 7 or 8 times!

This was one of my more recent sipdowns. I bought one of these dragon balls back around the start of 2017, but I decided that I wanted to see how it would age and resolved to break it out after I finished what I had of the spring 2017 production of Yunnan Sourcing’s Feng Qing Silver Needles. Though I finished what I had of that tea some time ago, I only got around to drinking this 2016 silver needle dragon ball last week. I found that it had kept very well in storage as it had not seemed to lose any of its youthful vigor. Compared to the spring 2017 Feng Qing Silver Needles, this was a more astringent and slow-burning offering likely due to a combination of its compression into dragon ball form and its age.

Prior to the rinse, the dry dragon ball produced aromas of hay, straw, sugarcane, and eucalyptus. After the rinse, it emitted aromas of cream, pastry, vanilla, malt, and marshmallow. The first infusion then introduced subtle scents of almond and butter. In the mouth, the tea liquor offered delicate notes of cream, vanilla, malt, sugarcane, and eucalyptus that were chased by hints of lemon. The subsequent infusions brought out aromas of wood, lemon, honeydew, and oats. Notes of almond, hay, straw, butter, pastry, and marshmallow came out in the mouth along with slightly stronger lemon notes and impressions of wood, minerals, oats, apricot, lychee, honeydew, and honey. At the time I decided to end the review session, I could still detect notes of minerals, cream, butter, sugarcane, oats, vanilla, and marshmallow that were backed by hints of wood, almond, lemon, and eucalyptus as well as belatedly emerging impressions of watermelon and steadily building astringency.

This was a very satisfying white tea, though it did not offer anything that one would not expect of a Feng Qing Silver Needle white tea. If you, like me, are a fan of Feng Qing Silver Needle white teas, then this tea will very likely be up your alley, but if you are not a fan, then I doubt this offering will be the one that converts you. Compared to the 2017 Feng Qing Silver Needles I have tried, this tea was a bit simpler and more astringent, but overall, it was still very enjoyable. In the end, though, I just think teas like this are probably best left to fans of such niche products. Feng Qing teas, in general, seem to be offerings that people either love or just find to be kind of odd at best.

Sunny days are back so I’m feeling the white teas again.

I once tried brewing it grandpa in a thermos but the amount of leaf in the dragon ball was too much and created a very astringent and bitter brew.

Today, I brewed one in a 150mL glass gaiwan, following the recommended temperature of 195F and early steeps of 20-30 seconds, gradually increasing to several minutes. The dragon ball is very compact, so I left the lid on the gaiwan between steeps to steam it and try to help it open up.

I found this tea to be straight-forward. A pleasant lightness in liquor aroma and flavor with predominance in taste of cantaloupe, watermelon rind, sweet grass and butter creamed with sugar. The wet leaf smelled of cantaloupe, cinnamon buttercream, wet warm hay and fleeting notes of brewed coffee grounds. Mouthfeel was drying but light and smooth.

This dragon ball is a nice little thing. I’d gladly pick up a few more for when I want an easy drinking experience without a ton of flavor.

Sipdown! I only had one dragon ball…so it was going to happen once I steeped this

Steep 1: 70 deg. C water, 6 minutes
Ended up being a rinse because there was no flavour

Steep 3: It kind of reminds me of a yabao, it tastes sun dried and aged

Steep 4: Still very tasty, but I guess I’m not much in the mood for white tea today so I\m going to stop here. This tea is fantastic, it deserves a good 6+ steeps.

This tea is lovely. Sweet, smooth and very fragrant. Floral, with some butteriness as well. The cinnamon spice aroma is there, but incredibly subtle. The leaves are gorgeous, and the little dragon balls are a joy to behold. I fared better with shorter infusions, I don’t think I went over 20 or 25 seconds even towards the end (Gong Fu Cha style). I shared this tea with my mother, who is quite picky, and she enjoyed it too! It was an added bonus.