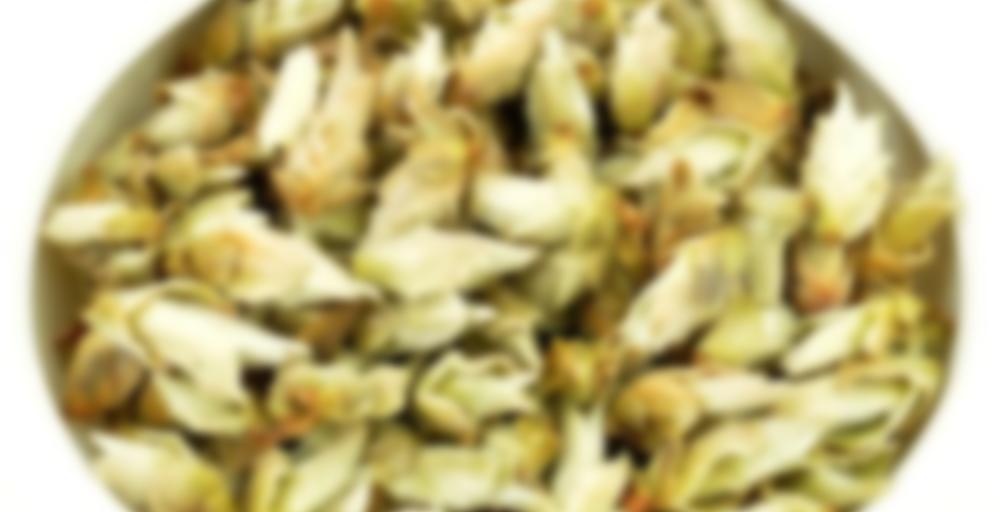 These little white buds come from wild-growing Camellia Assamica Dehongensis varietal. It is a sub-varietal of camellia that grows in the tropical area of Dehong and Lincang in southwestern Yunnan. The buds are picked in early February and then sun-dried. The flavor is fresh and a little fruity somewhat similiar to a good white tea but more complex flavors. The brewed liquor is whitish and clear, and there is a hint of fresh pine needles in the aroma!

Decided to do a gong fu session this morning while I have the time for it. This is one of the remaining teas from the last Here’s Hoping Teabox, so thanks to tea-sipper for organizing and those that contributed for sharing! I brewed the 3.77g sample I had of the tea in my 100ml shiboridashi using 185F water (I brewed it and put it in a hot/cold thermos rather than have to make trips back and forth from my kitchen to my dining table to the kettle).

Dry, the leaf reminded me of the aroma of a summer field, smelling of dry hay, dandelions, and pollen. Wet it still had the hay smell and had a very herbaceous aroma. The brewed liquid was nearly clear, almost looking like water, though there was a very pale yellow upon closer inspection. The aroma had a faint citrus aroma, like lemongrass. The flavor of the first aroma was initially like hay and herbs, but then a strong fresh pine flavor came forward at the end of the sip. All subsequent infusions had a strong camphor and citrus aroma with both pine and citrus notes being very forward in the flavor, with a very subtle sesame seed note in the aftertaste.

There wasn’t really any variety from steep to steep and I wasn’t able to pull many flavor notes from the tea, but I was really digging the strong pine/citrus flavor I was getting from the tea, since I’m a sucker for pine notes and rarely find them in teas. Thanks for the share!

From the moment I opened the bag, I knew this wasn’t for me. It had an odor I found very off-putting, though perhaps this is what other people describe as camphor and sometimes seem to like. I also got a bit of smokiness, though not in a good way (though I usually enjoy smoky flavors). I didn’t bother to get past the first steeping.

If you decide to toss or trade keep me in the loop.

Oh no, I already tossed it! Next time I’ll try to be less quick on the draw, just in case.

I have been guilty of the same. ;P

a lovely & very novel tea to me. this tea is definitely mood specific & not a daily drinker, but I enjoyed it a lot. in early steeps I couldn’t push through the white grape juice and douglas fir notes I was getting, but as it opened up I noticed camphor, marzipan and subtle lemon oil. the mouth feel is intensely silky and enveloping and is accompanied by a swell in sweetness reminiscent of stevia. it’s impossible to oversteep at this temperature, almost 0 bitterness. I almost find the sweetness + lack of astringency puts this tea out of my comfort zone :~P Not rating this, because this tea is at odds with me but isn’t necessarily bad.