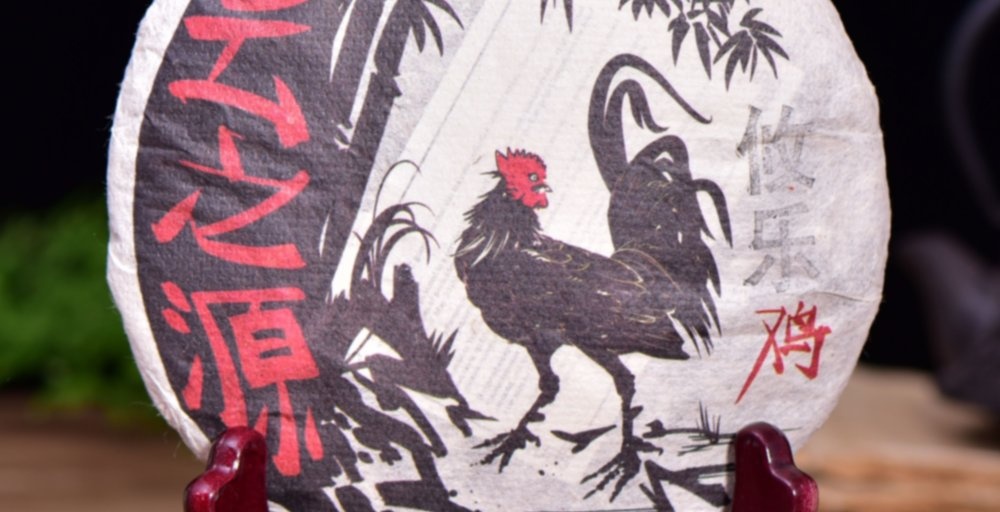 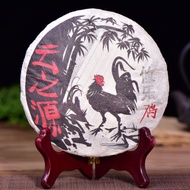 You Le Mountain (aka Ji Nuo mountain 基诺山) is situated east of Jing Hong city about halfway between Jing Hong and Yi Wu. The tea was picked and processed entirely by hand by the growers themselves in a protected area (国有林) near the village of Sheng Niu (生牛). The tea is tippy and healthy and is covered with downy silver fur. The raw material is almost entirely intact leaf and bud sets and so stone-compression was used to preserve the natural beauty of this tea.

The brew itself is full and round. The very characteristic You Le taste is present, fragrant with some floral notes… sweet and full in the mouth but with a vegetal bitterness present. An excellent single-estate You Le tea! Just 20 kilograms produced in total!

Wrapper Design by “Monk Maximus” of the United States

The sample I received stands out in appearance from most raw pu’ers you typically see. The leaves are rather large, largely intact and they’ve been neatly pressed into clear layers. I’ve had the sample in my pumidor for quite a few months, but I finally wanted to make a purchase decision on this tea, so I threw nine grams into my 130ml gaiwan and got brewing. I rinsed the leaves briefly for five seconds, giving them ten minutes before the first infusion. I did ten steeps, for 6s, 6s, 8s, 10s, 15s, 20s, 30s, 45s, 75s and 90s.

For this session I used both a regular glazed teacup as well as a brand new unglazed Jianshui clay teacup to evaluate the tea. I’ve used a similar cup for shu pu’er for a few weeks now with great results and was glad to discover that at least with this tea the clay seemed to be suited for sheng as well. Based on my limited testing, at least while new the clay can mute high notes somewhat while boosting lower notes and increasing body. For ripe pu’er the pairing is almost ideal, but after two failed experiments with dian hong I was glad to discover that at least with this particular raw pu’er I did not seem to lose too much of the tea’s nuance, whilst significantly bringing forth the tea’s flavor. The cup does alter the flavor profile slightly, but from here on I’ll likely be evaluating teas using a pair of a glazed and a clay cup.

As is customary to me, I did drink the rinse. While the color was still really pale, the tea was already surprisingly thick. While rinses can be somewhat hard to judge in terms of flavor, this one was nice, maybe a bit fruity but also somewhat creamy.

The first proper infusion still brewed a really pale greenish yellow. The tea, however, was much, much bolder. It had a nice, oily, almost buttery mouthfeel and it was really aromatic with a long aftertaste. The taste itself was creamy, slightly vegetal. The second steep produced an interesting luminescent yellow that was characteristic of this session. The tea continued to be bold and creamy, veering slightly more toward green now. It was also possibly hinting at astringency that was to come.

The soup was notably thicker in the third steep. The taste was greener and there was a hint of dryness, but vegetal was possibly the most dominant character. The next steeping was somewhat more coarse. The taste leaned more toward cooked vegetables now and the tea left my tongue a tad sandpapery and caused a slight burning sensation at the back of my throat.

Infusion number five continued to be quite strong. It was mostly vegetal still with a dry finish. The tea continued to be nicely thick in the sixth steep while the taste remained vegetal, but now also with a refreshing quality to it.

The seventh brew was harsher, less enjoyable. This is where the clay cup made the tea much more drinkable. The taste itself was a cross between vegetal and mineral. The next infusion was much better. It was quite reminiscent of the early steeps with its creamy vegetal taste. It was quite yummy and still nicely thick.

In the ninth steep the tea got harsher again, with some slight astringency to it now as well. While the tenth infusion was still quite full in the mouth, the flavors were beginning to simplify and the tea becoming less enjoyable and rewarding. I decided to call it here. While the tea could have possibly gone on for a bit longer, I think there’s a high probability it could get nasty really fast.

This tea was really good. It didn’t blow me away, but the quality is evident. The only reason I’m not more enthusiastic about it is because I’ve had the pleasure of reviewing some really high-end teas recently and while this one is better than a lot of other teas out there, it can’t quite compete with the best of the best at least in its current young state. With age I have no doubt this will become a fantastic tea. For such a young tea, this is very drinkable, although I’m not sure if it’s quite dynamic and interesting enough to warrant more than a session or two before tucking it away to age. While not cheap, I do think this sheng offers good value for the price, especially for a 2017 tea.

Normally I would order a cake of this right away, but as my pumidor for sheng is starting to get short on space, there are a few other teas I want to try before deciding which ones to get. I will likely invest in a second clay jar to break up another cake for drinking purposes and free up space that way as well. Nevertheless, this tea has my recommendation.

There is a dry bitterness which creates a medium-upfront flavour, but then there is a fruity fragrance which creeps around this and up your nose and down the sides of the tongue. Its really nice stuff if you like the kuwei thing – YS says its a vegetal bitter, but I didnt think of it like that, or maybe i’m just drinking too much fruity sheng it has all become part of a fruit for me, leaves included?