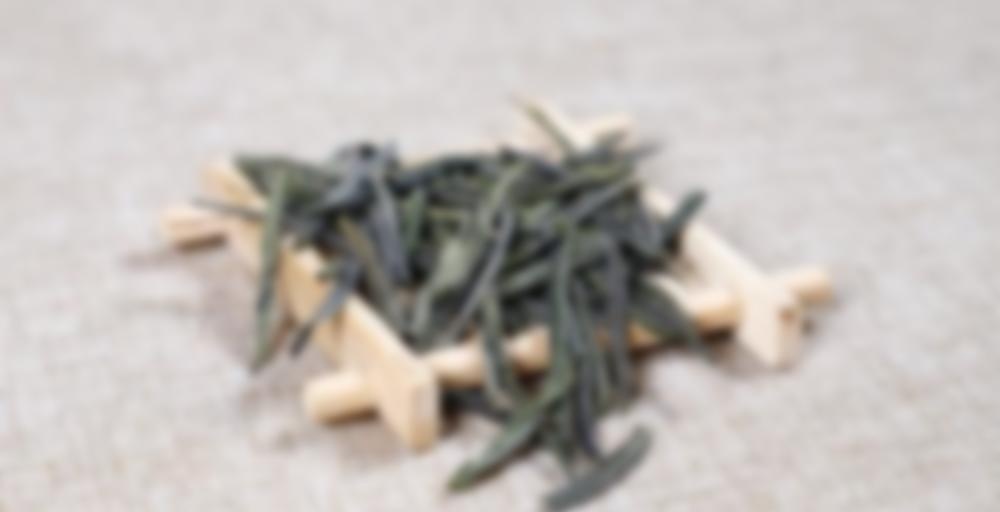 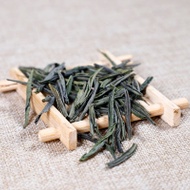 Liu An Gua Pian (六安瓜片 also known as Lu’an Gua Pian or Melon Seed) is one of the “Big 10 Famous Chinese Teas” (十大中国名茶), and is grown in Da Bie Mountain Liu An area of Anhui province. (大别山六安市安徽省). Liu An Gua Pian first became popular during the Qing Dynasty

Liu An Guan Pian is a unique tea because it’s picked at a more mature stage when the leaves are larger, the leaves are rolled with a a kind of broom (not hand rolled) and the tea flash baked dozens of time.

Among all the teas in the world, Melon Seed is the only non-bud sessile tea, and is made from a single leaf (with no bud), but somehow have no grassy taste at all. The stalk has been lignified in the production process, and once processing is completed the tea taste is thick and not bitter, and the fragrance is high and clear. The leaves are picked within ten days before and after the rain, and the second and third leaves are taken when picking (not the tender leaf/bud sets that are the crown). The pickers are reminded to “pick the tough (leaves), not the tender (buds)”.

“Liu An Guan Pian” tea was born in “Liu An Town” and became among the most popular teas of the Qing Dynasty. According to the historical records the poet Yuan Ming in the Qing Dynasty, wrote that Liu An Gua Pian evolved from the misty mountains of the Qi Shan range in the middle of the Qing Dynasty. The locals circulated the saying “Qishan Yunwu, the east from the python cave, the west to the bat cave, the south to the golden basin, the moon, and the north to the crystal plaque”.

In 1856 the Empress Dowager Cixi enjoyed 14 to 26 cups of the tea per month. The older generation of revolutionaries also had a strong affection for Liu An Gua Pian, in particular the great Zhou Enlai!

In July 1971, Dr. Henry Kissinger, who served as US Secretary of State, visited China for the first time. He was presented a gift of Liu An Gua Pian, which promoted the development of Sino-US relations and showed that the tea is worthy of the precious historical and cultural heritage with which it has been bestowed.

Liu An Gua Pian is produced in the Yu’an District of Liu An City and the adjacent mountainous areas and low hills of Jin Zhai and Huo Shan counties. It is divided into two production areas: “Inner Mountain” and “Outer Mountain”.

Outer Mountain area include : the radius of the Shibanchong and Shipodian streets in the Yu’an District of Liu An City, 5 km, the Lion Rock and the Luojiatun area.

Am running a little tea demo course and ordered teas from YS due to a very limited budget and bc I didn’t want to gamble with Verdant again lol. Anyway, have 6 teas, which I ran through today with a friend (more beginner to tea) over the course of 4 hours, and so these are quick impressions and transcribed from notes, and are somewhat haphazardly done.

very nutty smell, but the taste was very bitter, with an underlying sharp nuttiness.

Spring is my favorite season for many reasons. The blooming trees and flowers, the freshness in the air, and everything awakening and coming back to life. Being a green tea fanatic, spring also means the arrival of fresh picked green tea which to me embodies the season more than any other tea.

The first greens of the year arrived from Yunnan Sourcing a couple of weeks ago. Laoshan tea has been my favorite Chinese green tea for a long time but I finally got sick of it and vowed to expand my horizons this year. This is one of the teas I picked up. I had never tried nor heard of Melon Seed green tea but it sounded cool so I bought it and fortunately, it did not disappoint.

The handsome, dark forest green blades have a pleasing aroma of matcha, mochi, and buttered beans. They unfurl beautifully in hot water into wide lime green leaves. I grandpa steeped 1.5g of leaf in 8oz @ 180 F. First sip tasted similar to dragon well and Anji bai cha. Not exactly the same but the flavor is somewhere in between the two. Full bodied, grassy, and vegetal with notes of asparagus, kale, and snap pea. It reminded me of sencha in appearance and taste. Greener liquor than typical Chinese teas and has that strong grassiness and bitterness of Japanese green teas. However, it turns bland once topped off with hot water so it’s not one that can sit in your thermos all day.

This is a very interesting green tea, which is quite different from the others I have had. I wasn’t sure how to brew it, but in the end I used 4g for this session in a 100 ml gaiwan with a fairly constant 80°C water. The infusion times were 60s/20s/30s/60s. It turned out well, but given the character of the tea, I think it can perform quite differently with other parameters.

Dry leaves smell of watermelon and popcorn, and in the preheated gaiwan also vegetables and spinach. Once wet, I get aromas of stewed carrots, beef broth, and gardenia flowers.

The first infusion is extremely smooth and full bodied with no astringency and only light bitterness. It tastes of sunflower seeds and broth with a slightly grassy finish. After swallowing, the tea is cooling in the throat and displays crisp sweetness with flavours of nuts and green apple.

Second steep has more astringency and lighter body. Higher notes are more present with a crisp profile and citrusy flavour. Aftertaste again has some sour green apple note, but is also reminiscent of copper, sand, and spices. Third steep is somewhat less interesting in this particular session, but it has a sweeter long-lasting aftertaste with a new melon flavour.

Finally, fourth infusion is again fairly distinct. It has a strong melon seed flavour and notable dryness, but overall is more savoury once again.

One final thing to note is that the tea has a strong cha qi for a green tea. It is relaxing and warming and makes me sweat.