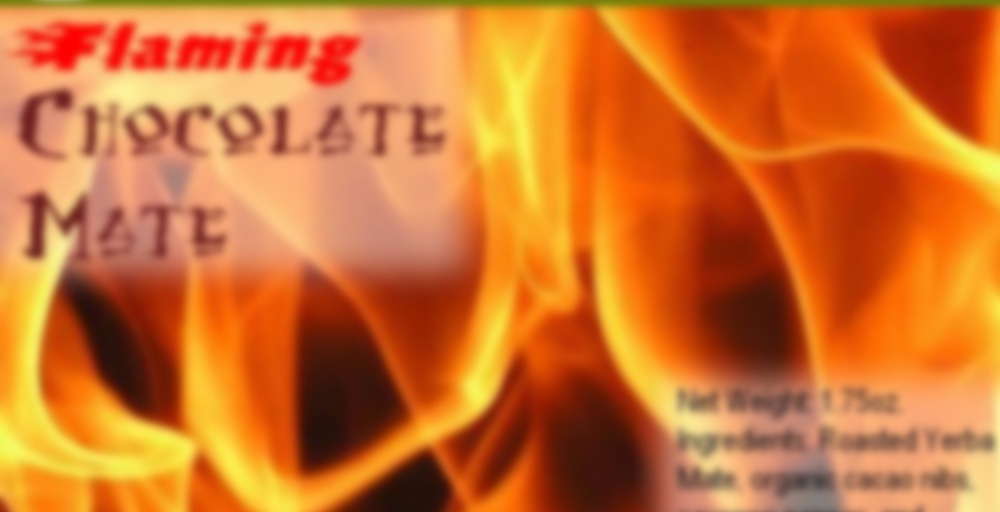 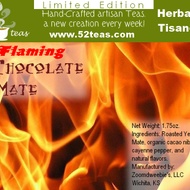 Ready for a bit of heat and a bit of sweet? How about a nice caffeine kick to boot? Here’s some roasted yerba mate blended with organic cacao nibs and cayenne pepper for a delicious, caffeinated kick in the mouth.

As always, this is a limited edition so don’t miss out.

Oh wow! I LOVE this! This is AWESOME!

Hot and spicy and sweet, the heat that’s generated from the cayenne here is more like a slow burn, like the embers in a fire pit. I don’t feel like my mouth is on fire, but I feel the burn. The chocolate is a little on the light side (remember the formula: chocolate = good. more chocolate = better.) but it is very smooth and delicious, and the roasted yerba maté brings out the flavor of the cacao in a very rich and satisfying way.

I am LOVING this.

Damn damn damn, I was just thinking about maybe/maybe-not ordering this…. now I want it! Gahhhhhh dilemma! (I’m very sad that I missed out on the Double Chocolate Decadence… :( )

I know I should get this too!

Amanda bought some for me… I couldn’t resist!

Thanks to Kittena for this sample!
Peeeee-eeeew, does this ever have a scent to remember. Like dirty socks. Kindof like regular mate, and then with the addition of cocoa it turns kinda funky.
No matter, I don’t mind. My raspberry leaf smells worse sometimes and I get through that just fine :)
The taste is pretty good to. Not much chocolate, but there is some nice heat that I quite liked, and not a building heat either. It dissipated with each sip instead of getting stronger with each one. Odd though, adding just a few drops of agave really spiced up the cup!
Rating: 82

So, not only did I order this from 52teas, I also received it in my grab bag, so I’m really hoping to like it since I have 4 whole ounces to finish off.

Dry, it smells much like Malted ChocoMate to me, but with the kick of cayenne which, like it did to Alphakitty, burnt my nostrils when I stupidly sniffed the tea. Which I did despite reading her tasting note. Sigh.

Steeped, it still smells very much like MCM. Clearly the roasted mate, the flavour of which I do enjoy. Unfortunately, it tasted much like plain roasted mate plus some spiciness to me, which resulted in the addition of a bunch of maple syrup (that’s just what I had right there) in order to make it drinkable. The second infusion is pretty similar; although I think I could get through it without sweetener, I’m not sure I will or want to.

I’m not sure whether I’m missing the chocolate here for some reason, or if it’s just blending in too much, but I’m kind of disappointed with this blend. I liked Malted ChocoMate much better, and since I have something like 8 oz. of it, I really can’t see myself picking this one to drink over it. I wouldn’t even be likely to drink this one just for the spicy kick, because Mayan Chocolate Chai is my tea of choice for that situation, because it is utterly amazing. Bleh. I guess sometimes there are just tea misses.

As that is too bad. I got this one in my grab bag as well. Now I think that I might not like it either. I am not that big of fan of spicy things :(

Glad I listened to my gut here. Sorry you don’t like it, though.

Hrmmm. I’d be willing to trade some teas to get at least two ounces of that off your hands.

… are you serious?! I would be more than happy to send it to you.

Ok, I finally got up the nerve to try this. I received this in my grab bag. But I am really wimpy when it comes to spicy goods. But what the heck, I love chocolate. Lol, I accidentally sniffed the bag and ended up sneezing for about 5 minutes. oops

This tea upon first sip is really nice and smooth and slightly chocolatey. But then the spice comes out. It is a little bit too spicy for me. It really is good, but I am just a wimp.

I am not going to rate this because I really like it, and it is what the description said. Great job Frank! It just isn’t the right tea for me!

I have been wanting to try some spicy teas, so it was a pleasant surprise to get this in the 52teas grab bag. Spicy AND chocolate? Why yes please. I’m surprised this only has one tasting note, since it seems like anything chocolate = instantly popular.

I made the mistake of sticking my nose in the bag to sniff when I got this, and got cayenne in my nostrils. Not the most pleasant experience, but it meant that this had to be spicy! I was disappointed by the spice level in Mango Diablo, so I was kind of happy to have a burning nose. And yes, this blend has a lot of kick! It’s not “top of the mouth chili pepper” heat, but more “back of the mouth slow burning.” At first sip it’s like chicory coffee (which is what I automatically associate roasted mate with), then a bit of deep, dark chocolate and them pow cayenne! In fact, I think the spicy element is the strongest taste here: the chocolate is probably the weakest. You can definitely taste it, but it’s not super rich creamy chocolate. I actually like that it’s subtle, since it doesn’t have a dessert-y feel and is light even with all the rich flavors going on.

I caved and bought this one before the grab bag sale… glad you like it!

Sooo…what did i like about this tea? The spice :) What did i not like about this tea? The smell. I won’t share what the smell reminded me of since nobody wants to read that lol What this tea does do though is make me excited for the malted chocomate that’s on it’s way to my place!
I kinda want to feed this one to my other half to see what he thinks but sadly he’s at work while i’m my tea journey today heh.

Sil, on the contrary, WE DO WANT TO KNOW, what does it smell like??

Can’t be much worse than the vomit description a while back.

agreed on the smell! it was certainly… interesting!

Sipdown (298)
Although I admire Franks ingenuity, I’m usually not much for flavored teas. This one is strange, with a tobacco flavor to it, an aftertaste of carob, & my daughter Jess says it reminds her of clove cigarettes.
My initial reaction was, “No”. But it kind of grows on you a little.
This was sent to me from Alpha Kitty. Thanks!

Sounds intriguing. I have a sample from CK. thanks for helping me figure out my morning cup!

First tea from TEA BOX B!! Thank you Momo and everyone keeping it going! Very happy to get the box again! They are the best things ever and a great way to try a billion new teas without actually stocking them in your cupboard.

I really wanted to try this one. Opening the package with a smell test, it obviously has chili powder! The dry blend looks like plain roasted yerba mate, but there must be some chocolate hidden in there. I steeped a few minutes just after boiling but there really doesn’t seem to be much flavor here. There is a flavor that reminds me of BBQ from the roasted yerba mate with a hint of chocolate and a hint of heat. Way less heat than 52Teas Chocolate Chai (which is probably a good thing!) But I wish this one had more chocolate… it could have been like a spicy hot chocolate. I doubt this one could be steeped too long to decrease the flavor like other 52Teas since this one is just chocolate and pepper, so I don’t think the steep time ruined the flavor.

I opened the pouch of tea and and took a whiff and ended up inhaling a bunch of cayenne pepper. Five minutes of pain, swearing and a red, runny nose later I have a steaming mug full of the offending beverage. What doesn’t kill you makes you stronger, eat your enemies with your breakfast cereal, etc.

The flavour is less chocolatey than I expected, there’s a hint of cocoa but the tea mostly has this toasted, bread-like flavour. Then the bite of cayenne pepper hits you at the end, though it’s not as spicy as I’d feared. I’ll have to do a longer steep next time to see if I can get more chocolate out of this blend.