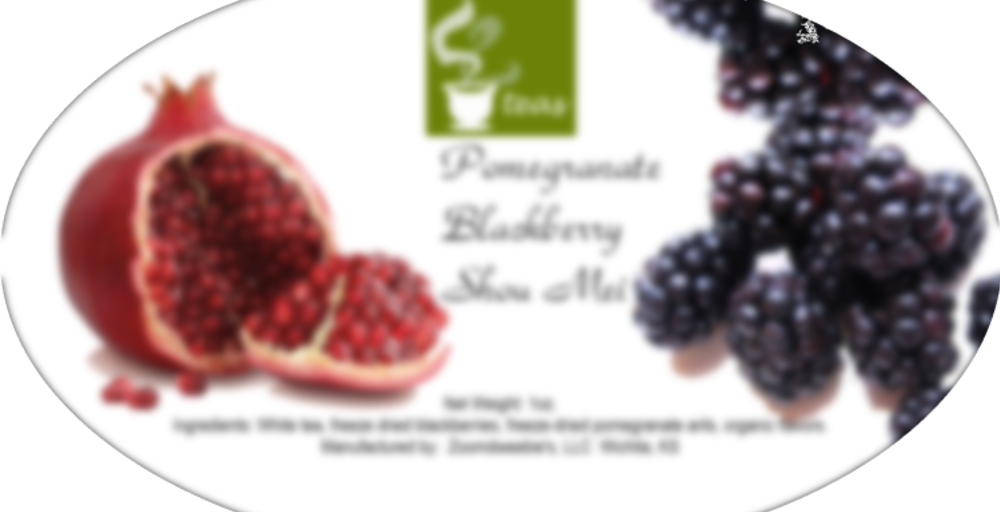 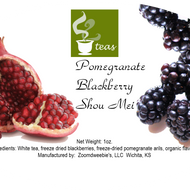 Well, after nearly six years, my amazing fantastic super-expensive label printer pooped out on me. So I’ve been struggling to come up with a temporary fix while I figure out how I’m going to afford a new label printer. In the meantime, you get some interesting labels. At least you know the tea will be good. =)
This week’s very tardy blend is a shou mei white tea base with real freeze-dried pomegranate arils, freeze-dried blackberries and organic flavors, and it is delicious.

Tried this brewed hot and chilled… I like it better than a cold brew. I can taste the white tea a lot more, and there’s no astringency. Yum :)

ETA: Hmm. Sadly the leaves have very little flavour after the first infusion, so the second infusion (where I just let them cold brew) was pretty flavourless. Good to note… maybe I should hot/cold brew this one instead (as in, leave the leaves in instead of removing them).

sipdown! (205) I was under 200 for my goal for the end of June, but the arrival of a small package from nxtdoor means that i’m back slightly over 200 again. However, i figure i’ll be through a couple sipdowns before the weekend rolls by so i should be ok. Of course, that’s provided my verdant birthday order doesn’t arrive…though if it does i can always keep it boxed up until my actual birthday since i’m not sure if i can afford my other bday orders heh.

anyway…i digress on with the tea! So this one? it’s ok. not my favourite, not my least favourite. pretty middle of the road as far as teas that i’ll drink go :) I don’t mind being done with it heh

Another amazing blend from 52Teas. That’s one of the reasons why it remains one of my favorite companies … because while there are occasions where there are tea disappointments from 52Teas, more often than not, I’m satisfied with a tea, and there are plenty of times when I’m doing the happy dance over a tea. And I love the uniqueness of it all … you just aren’t going to find teas like 52Teas anywhere else.

The tea base is Shou Mei and it gives off a nice earthy note … not overtly strong (you don’t really expect a white tea to be strong though, do you?) but I like the subtle approach of the Shou Mei. Stronger than a typical Bai Mu Dan … it has the substance it needs to hold up to the strength of the pomegranate and blackberry notes.

The pomegranate is tart and juicy! Just enough tartness to contrast with the sweetness of the blackberry.

A really wonderful combination of flavors. This one is GREAT iced!

How exciting, for the second time I’m the first person to review a 52teas blend! This is one I probably would have skipped (sadly, because I love pomegranate), since before I tried to limit myself to 2 of their blends a month. The tea of the week club is SO worth it, since now I don’t miss any of them! Though the white blends never seem to be as popular as the other ones, maybe because you get 1 ounce instead of 2?

Just a few days ago I was decrying the lack of teas that actually taste like pomegranate, but this blend has actual dried pom seeds in it so my hopes were up. Though, really, if I want a pomegranate fix it is the season for them—in fact I devoured half of one just last night! Yes, I am a pom addict.

I made this iced and it took me all day to get through it—not because it’s bad, but because I am freezing! I am so used to the balmy temperatures of my apartment, where it’s about 75 with the heat OFF because I’m on the top floor and everyone else has it blasting. My parents live about 60 miles up from the city and good lords is it chilly here. Not really iced tea weather anymore. But even with my hands feeling like they are going to fall off I enjoyed this blend.

The blackberry is the dominant flavor here, and (I guess unsurprisingly) it reminds me of the watermelon blackberry honeybush that I adore. Sweet and juicy! The pom is a supporting note, but for once it actually tastes like pomegranate! Tart and crisp without the raspberry vibes pom blends usually give me. I’m probably going to save my pouch for the summer, I imagine a big pitcher of this with a slice of lime would be divine.

Thank you Kittena! This was very tasty sample, and also another sipdown! (151). I’ve been trying a lot of my smaller samples lately it seems. Gotta make room for my Butiki order that OMGSrsly is holding for me.

This is really nice – I keep forgetting how good white teas can be. It’s slightly floral, but the berries are the key players here. It tastes like juice without all of the sugar, and is quite refreshing. It would probably be very good iced!

So I tried this mostly because I got it from my 52teas subscription and I believe that I should try everything once before I reject it out of hand, but white teas have never been my favourite thing, or even close to it. Imagine my surprise when I actually like this tea! The flavouring is subtle, fruity but not overwhelming and the white tea tastes like white tea but it doesn’t have that je ne sais quoi that I have never liked about it, somehow.

I think I steeped this correctly at 175 degrees for 2 minutes, but if anyone has suggestions on how to make this even better, please feel free to share, I haven’t steeped many white teas.

I’ve been eyeing that one for a long time. I may have to break down and get it now.

Do you want me to send you a cup’s worth in that trade we already set up?

Ohhh that would be nice if it isn’t too much trouble!

I’ll portion some out right now.

Not a bad white blend, and I by no means dislike it. I just wish I hadn’t ordered the Black Currant Bai Mu Dan with this tea, because there are similarities, and I do enjoy the BCBMD much better. This will be my cold-steep tea for the week. The pomegranate makes this tea slightly tart, but that blends well with blackberry. The leaves are massive and reasonably well-intact. If you like tart and slightly sweet white teas, this is a great blend. If you like over-the-top juicy white tea that can re-steep forever, go with the Black Currant Bai Mu Dan.

Swap from Alphakitty! This one smells so good!

I’m slowly getting through all the swaps people have sent me. Now that I’m on break, I’d imagine I’ll have more time to really sit and enjoy some teas.

Smell: Dry this one smells heavily like blackberry with hints of pomegranate. It’s also got a bit of a buttery scent to it, which I found in the one unflavored Shou Mei I had. Yum. Nice and sweet/refreshing. Once brewed it smells even better! Slightly tart, deliciously sweet, and FRUITY! I’m getting the blackberry mostly, but that’s totally ok. The pom is very light. The buttery scent of the Shou Mei (also a slight “earthy” flavor) adds a bit of depth to the cup. I can’t wait to drink this one!

Taste: The tartness is a little more evident in the taste, but it’s nicely balanced with the sweet notes. The blackberry is spot on, not candy-like or artificial. The pomegranate notes are also fresh and delicious, even if they are less pronounced. The cup is smooth, and the mellow white tea base is perfect here! Mildly buttery, earthy, and sweet. I’m also getting this wonderful cooling effect at the back of the sip…don’t know where it’s coming from, but it makes for a very refreshing cuppa.

Overall, I’d say this tea is a big win. Love the flavors, the mouthfeel, and the crisp, refreshing nature of the brew!

I know feel like I need to buy this tea! I need MORE. haha

Brewed 2 quarts using 185°F water for 3 minutes. Put the pitcher in the refrigerator to chill overnight.

Delicious fruity tea. I definitely taste the pomegranate and blackberry, but the pomegranate is more prominent to me. It is naturally sweet and has a lovely sweet, white tea aftertaste. This actually reminds me of the Forest Berries Silver Needle VIT.

My second 52 Teas white blend of the day – on the strength of Blackcurrant Bai Mu Dan, I had to give this one a try! The dry leaf here is interesting – mostly downy silver needles, but with a few black-brown leaves and twigs. There are dried pomegranate seeds and some whole and some partial dried blackberries. They seem to rehydrate pretty well, judging from the brewed leaf. I used 1 tsp of leaf for my cup, and gave it 2.5 minutes in water cooled to around 170 degrees. The resulting liquor is a medium golden yellow, although with little discernable scent.

To taste, it’s pretty wonderful. The pomegranate is the clearest flavour, initially sweet but with a tartness emerging mid-sip, and a mild watermelon-like wateriness to round off. The blackberry plays second fiddle, but it’s also there, and adds a deeper, darker fruitiness and a mild sourness. Both flavours are pretty true-to-life, and they’re a good pairing.

The white tea base is fairly prominent, and adds a dusty-tasting undertone. That’s probably the only thing I’m not quite struck on, but it’s just about possible to ignore it. The fruit flavours aren’t especially strong, but fortunately the base doesn’t overpower them completely.

I think on balance I prefer Blackcurrent Bai Mu Dan to this one, but I’m still pleased with the way this one works as a late summer treat. Possibly it’d work better iced or cold brewed, so that’s probably what I’d try next. It’s a light, juicy, refreshing cup in any case.