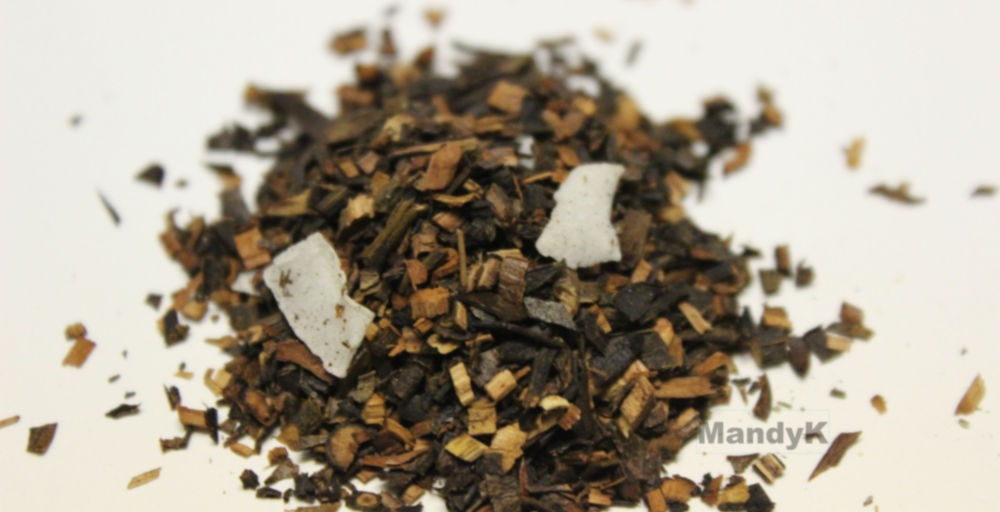 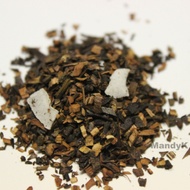 Sweet, caffeine-free African honeybush combined with our signature honking-big coconut flakes and organic flavors. Our Coconut Cream Pie black tea is one of our all-time bestsellers. I can’t fathom why we haven’t made a honeybush version of it yet, but I’m here to fix that now.

My tastebuds cannot be entirely trusted recently, but this tea fell quite flat for me. No coconut/creamy flavours, just a pleasant honeybush. So totally drinkable, just boring.

This is another of the coconut teas that has made its way over to my Sipdown Station™ so I will drink it while the coconut is still good. I made this cup late last night, after the sun had gone down and the house finally started cooling off, but was too tired to log it, so hopefully my (poor) memory doesn’t fail me.

I used 5g to 350ml 205F water, steeped “teabag left to soak in the cup” style. This had such a rich and sweet coconut flavor! Aaah, why does coconut go bad so fast? I tend to avoid it as an ingredient now because of that, but when it is still good, I just really dig coconut-flavored teas, and this one was no exception. There was a sweet creaminess to the tea as well. At first I was getting that “peppery” flavor note from the honeybush base, but as the tea kept sitting and steeping in my cup, by the time I was about halfway in that note had mellowed out and instead it was tasting more like a slightly nutty honey and oats flavor. It wasn’t quite a graham flavor, but I could still see how that flavor note was a bit like a pie crust.

Really liked this one and looking forward to the next few cups!

Yep, coconut so so good but then so so bad.

Honeybush isn’t usually my thing and I have so much coconut right now, but I have to admit that this was a delicious evening cup last night. Just really nice coconut flesh, coconut cream, and honey/sweet syrup flavours that are both decadent and smooth. I like this a lot better then the poorly remembered black tea version of Frank’s, which I recall liking a lot even so (yeah, it’s been a while since I’ve had one of Coconut Cream Pies).

I love that it took almost 2 full weeks for me to run across a tea in Amanda’s calendar that I’d tried before! Even better, it’s one I tried and really liked, so I’m delighted to have it back in my cupboard. Just as creamy and coconutty as I remembered and I LOVE that it’s on a honeybush base. Why are there so many more rooibos blends out there than honeybush? Honeybush is so much more delicious, in my opinion at least!

There are so many different 52Teas coconut blends I didn’t realize this was different from Coconut Cheesecake honeybush. So this is a new one for me, even though I know I love the old version of Coconut Cream Pie black. (Just to note: All of my 52Teas blends are still Frank’s blends – no new ones yet!) And oh boy there is coconut flavor in this one! Plenty of flavor with a nice tanginess to balance it out. (Shouldn’t more tangy be found in the cheesecake blend though?) The coconut is the big flakey type – my favorite dried coconut in a tea. I really need to enjoy this one before the coconut goes bad, but I think this type of coconut lasts longer in tea than others though. Coconut blends are my first priority, I guess! I always appreciated that 52Teas was really the only shop with flavored honeybush.
Steep #1 // heaping teaspoon // few minutes after boiling // 1 minute steep
Steep #2 // just boiled // 2-3 min

Blind pick number 4. First impression of dry leaf scent is coconut rum. Yup smells just like it. Steeped it still smells quite a bit like alcohol but more coconutty(not even a word but I like it).
Taste is all coconut with just the barest thought of alcohol.
Overall it is good but probably not a repurchase.

It gets a thumbs up from me.

I was feeling rather dissatisfied with my caffeine free beverage options this evening until I remembered that I had this deliciously creamy coconut-y treat in my cupboard. Win! Tonight I’m even getting a hint of pastry as the tea cools which adds a fun twist to the tea. It does taste a little bit like coconut cream pie. I kind of want to add cream to my cup, but I’m afraid I’ll lose the pastry, and possibly some of the coconut, flavor that way. That would be a shame, so I’ll just sit here and enjoy this one just the way it is.

Coconut milk might be able to add the creaminess to this one while keeping the flavor, I’d been adding it to similar teas lately so it might be worth a try!

I’ll have to try that!

Another sample from Mandy! There are a few pieces of dodgy-looking coconut mixed in with the honeybush. They almost look (and feel) like paper… weird. I do smell coconut, but it also has that alcoholic flavoring smell that I’ve been finding in so many flavored teas lately. I did a 5 minute steep in boiling water, and used a little over a teaspoon of tea.

The brewed tea smells lightly of coconut, and heavily of vanilla pudding! :O Exciting! Meh… Taste-wise, the flavor is a bit weak for me, I think in the future I’ll use two teaspoons. The flavor this is there is rather good, though! Very creamy and vanilla pudding-ish, with plenty of coconut. I get something resembling crust in the aftertaste, probably just as a result of the honeybush base and not the flavoring.

Overall, this is quite good! I find it to be mostly accurate to coconut cream pie, it definitely has the coconut and the cream down if not the crust as much. Reminds me of pudding, yum! I won’t have any trouble drinking the rest of my sample. :D

Edit: I think the actual coconut pieces in here might be past their expiration… I’m getting a weird sour taste on the tail end of some sips. I’ll remove them and try again another time.

Wow seemed we had vastly different experiences with this. This is one of the only times that I’ve had a tea that smelled like alcohol. And unfortunately it’s also the only tea that steeped up and still tasted like straight alcohol to me. Hot liquor.

Gross! I’ve noticed the alcohol smell (in dry leaf) a lot with flavored teas lately, even with Stacy’s tea. Obviously, it was gone after steeping. I just kind of assumed that it’s a common byproduct of using flavorings. :P

I’ve gotten the alcohol smell in their chocolate rooibos.

I’ve never noticed the alcohol smell in any other teas except another 52teas Honeybush, which is why it’s so weird to me. Like even other 52teas smell like things even if it’s artificial smelling. I was very disappointed.

This is my first honeybush. The dry leaf smells very strongly of alcohol, like I’m sniffing a liquor and not a tea. Upon sipping, the first thing I taste is alcohol. Even with sweetening it tastes like I should be getting a buzz. There’s also a subtle sort of woodsy note, that I’m assuming is the honeybush. But definitely no coconut, no cream, and no pie. Not even a coconut rum cake sort of effect. Just alcohol. I don’t know if I got a bad bag or what, but I’m disappointed.

You might try airing your tea out a little bit. Pour it out onto a baking sheet or something and spread it out. Give it 15-20 minutes, stirring it around a couple of times during the process. You shouldn’t have to do this, but alcohol is used in our flavors as a carrying agent. As it evaporates, it carries the flavoring through the tea. It SHOULD have all evaporated as we were blending it, but occasionally, for some reason, we might end up with some of the tea that the alcohol didn’t properly evaporate from. I’m afraid I’m running into this a little more frequently now that I’m doing larger batches of tea. I’m going to have to redouble my efforts to make sure everything is blended extra well.

Ok, I just put it in a dish, and I’m letting it air out. Fingers crossed! I thought it was weird because I’ve tried a few of your guys teas, and always had positive experiences!