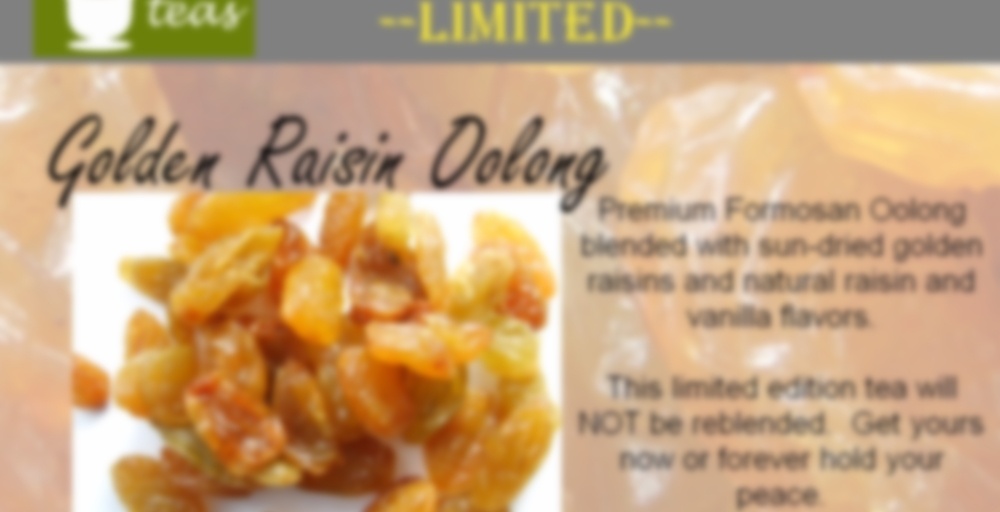 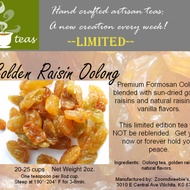 I am in the process of clearing out some of my excess inventory of fine estate teas to make room for more 52teas blends, so I decided I should just create some really unique blends with these and offer them to our loyal customers. Please note that these blends marked “Limited” are not available in conjunction with any giveaway or free pouch promotion. (Sorry).

These limited edition blends will be seriously limited. I have TEN 2oz pouches of this Golden Raisin Oolong, and it will not be reblended. So be sure to get yours while the getting is good!

Raisins are a very very recent vice for me. Since december 30th 2009 actually. I was baking something that included raisins. I haven’t had problems with raisins in baked goods for years now because I’ve just learned to taste around them. But after having put my baking project in the oven, I caught myself, to my extreme surprise, standing there and eating the rest of the raisins right out of the box! This is huge, because just an hour before, if you had asked me, I would have said that I don’t much care for raisins, and I assume that this was what prompted me to get this particular blend.

Upon opening the pouch I’m immediately greeted by a smell that rather reminds me of that vanilla date concoction that I didn’t like. It’s not nearly as strong here, but it’s defintiely there and it’s the same type of smell. This has me a little worried. Also, the leaves look small and very dark, almost as if it’s actually a large leaf black tea and there are lots of raisins in it.

The tea brews up rather dark, almost like an average black tea. I’m used to greener oolongs, so that’s probably why I’m getting a little type confused here. I wouldn’t say it’s particularly oolong-y or raisin-y in flavour. There doesn’t seem to be anything very characteristic of either of the two. Deepest down I would say that it still tastes a bit like a mild black The raisins are only coming through as a slight fruity sweetness while it’s hottest. They are more pronounced as the cup cools a bit.

I like it this way. It’s not very raisin-y, but it’s enough. Had the raisins been more dominant I expect I probably wouldn’t have liked it much at all. But this way it’s very nice.

I personally love having a strong black tea with a buttered slice of home-made soda bread all heavy with sultanas. The little golden raisins are so flavorful! and that buttered raisin toast tea from 52teas is just divine.

This is a different one, though. And the raisins that I’ve been eating lately are the little dark ones, but I don’t know if that makes a difference. I tried eating one of the raisins when cleaning out the pot afterwards, but that’s not recommendable. It was just water with a bit of fruit around it after being steeped twice. :)

And any good cook knows that raisins taste FAR better after being hydrated in wine or even scotch… ;)

I think I prefer my raisins ‘raw’ or in baked stuff though. (Or, preferably, as grapes. I could eat nothing but grapes for dinner, no problem. )

The Formosan oolong is soft and buttery. The raisin and vanilla notes are just a beautiful touch. It kind of reminds me of nice cinnamon raisin toast except there’s no cinnamon (Maybe I should have included that). I don’t think you’ll find a raisin flavored tea anywhere else. Definitely not a raisin flavored oolong, and absolutely not an oolong of this caliber.

I’m glad my batch came out with a little extra for me. I have a feeling this one is going to sell really, really fast, and we are absolutely limiting this blend to these ten pouches (pardon me, it looks like we sold one, so make that NINE pouches).

This is a really special treat. I hope everyone who gets one enjoys it as much as I do.

How long does it normally take from order to the door?

I would say about a week in the US. We ship USPS First Class Mail. We try to get the orders out ASAP, but there are times when we lag a day or two behind. I’m always working on trying to make us more efficient.

I think it’s about time for another flavored oolong blend! Bring it on!!