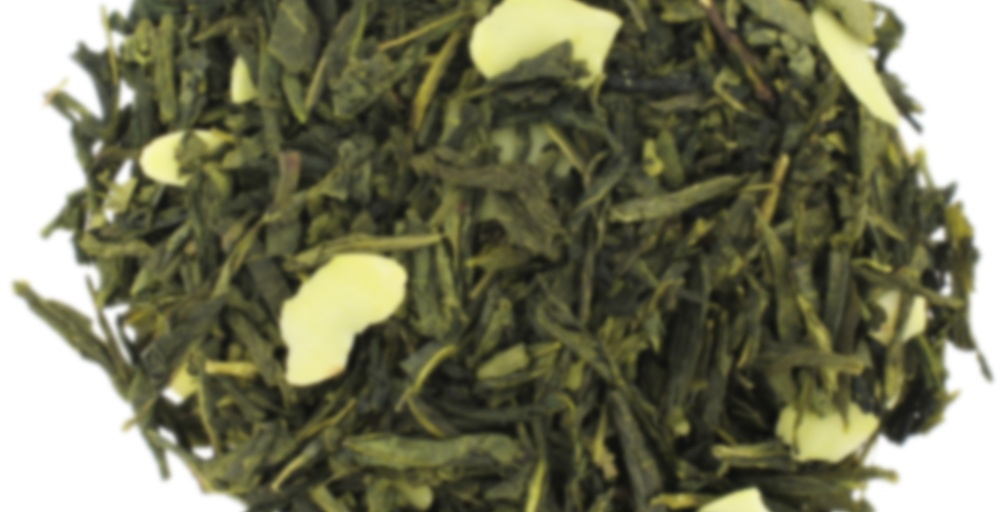 Since I’ve been so deep into my Comptoir cups lately, I might as well keep it up into the new year. Reading about this one, I was excited about the almond-cherry combination. Artificial cherry can be so vile, but sometimes it veers very nicely into bitter almond, so I figured this tea could be a double-almond experience, at best.

The dry tea smells absolutely gorgeous. It’s hits a few perfect galette des rois notes, but then turns a little boozier, like a liquored-up crème d’amandes/frangipane. The best part, though, is that it tastes exactly as it smells. I rarely (never, really) feel the least inclination to add alcohol to my tea, but I really do want to try this with a few drops of amaretto.

The cherry is present, but it’s more a cherry ghost than anything. (The ghost of cherries past.) It adds a bit of sweetness and rounds off the flavour very nicely.

All in all, this is a very lovely tea. I definitely want to compare it to a black version – I’ll check if Comptoir do one, otherwise I’ll try to find that one by Mariage Frères (ETA: Actually, Theodor – see the comments.) everyone compares to a galette des rois.

Tribute by Theodor is cleary THE galette des rois tea :)

PM me your address and I’ll send you a sample of it, no need to buy a full bag if you’re not sure to like it

You’re the Fairy Godmother of samples, Y, you really are.

Another one from the Yet To Try box, which is getting very very close to empty now! Not counting this one there are now only four things left in it. I am quite pleased with this achievement because it was full to bursting when I started and it’s not actually a small box.

It’s another Frenchie. The name is French. All the information in the database is in French. I haven’t the faintest idea what this is supposed to be, but I gather from Anna’s post about it that I should expect something with cherry and almond on a green tea base. Very well, that sounds pleasant, actually. It was Anna who shared it with me as well.

It’s very very easy to find the cherry here. It smells almost exactly like the steam from the pot did the day I tried making cherry cordial with our own cherries. I just made a small amount to see if we liked it, so we got maybe two glasses each. And we liked it. A lot. I don’t care what kind of fancy-schmancy cordial you all can get in your various supermarkets around the world, I can promise you without a shadow of a doubt that it can not, I repeat it can not beat home made stuff. Not the last time I’ve made cordial, let me tell you! And it was stupidly easy as well. Anyway, home made cordial boiling away on the hob, that’s what it smells like. This is a very auspicious start indeed.

After a little bit of cooling and sniffing, the almond comes out as well, and I’m now getting a more marcipan-y smell than cherry smell. Thick and sweet. I have a large roll of marcipan for baking purposes in the kitchen and this tea is making me want to go and bite it. I shall excert some self control though.

The flavour is strongly almond, but with a fruity note of cherry to it. I think almond is the primary note, but the cherry note is fairly large as well. It’s just more of a side-dish note than the almond is. Like how you would say, “for dinner I had a grilled fish with some potatoes,” but you wouldn’t say, “for dinner I had boiled potatoes with some fish,” because that evokes a strange idea of what you dinner was like. In the aftertaste, however, the cherry is the star and it’s a long note too.

The thing about flavoured tea is I greatly enjoy a flavoured tea, but I don’t want it to be so strongly flavoured (in most things) that I lose the feeling of drinking tea. I want tea with flavouring, not flavouring with tea. I’m actually a little uncertain about where this particular tea falls on that scale, but I think that must be due to me not really drinking very much green tea in general, so the base doesn’t stand out to me super much. I’m willing to give it the benefit of doubt on this point.

It’s quite a pleasant tea and I’m very much enjoying this cup, but I’m not sure it would really hold my interest in the long run what with it being green. I like green well enough, I just don’t find it as good as my blacks, so I’m not very good at drinking it. In spite of the fact that I think cherry and green tea are two flavours that suit each other very well indeed, I’d be more inclined towards a black base blend of this. (And here, that brioche blend from American Tea Room springs to mind, actually.)

this does sound yummy