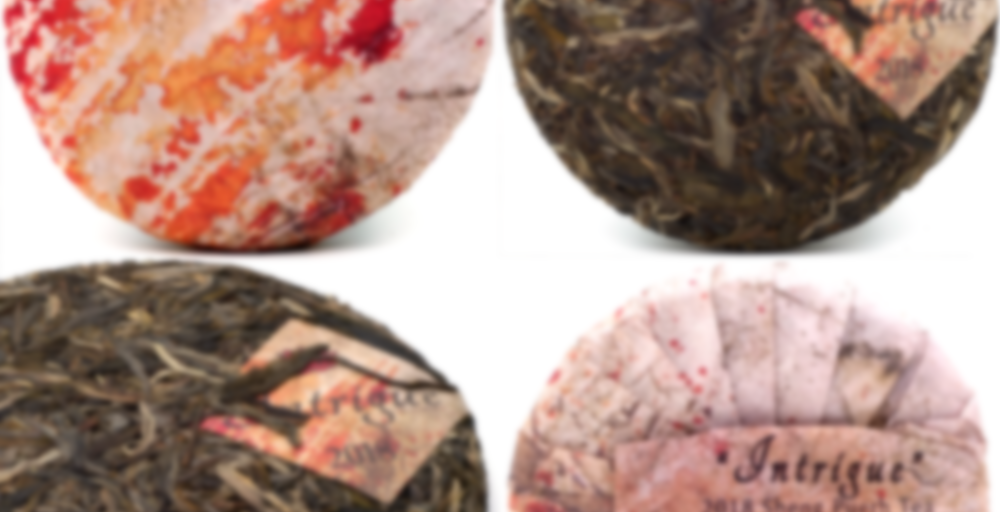 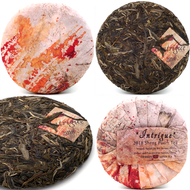 by Crimson Lotus Tea
81
You

This is a custom tea blend of Spring 2018 first picked material. We worked a long time perfecting this blend. We wanted something that matched the complexity and depth of the artwork. The amazing wrapper was designed by Bev Byrnes. ( check her out on Instagram ) She is a local Seattle artist who has been into puerh tea for a very long time. Her collection of aged puerh tea would put most professional tea shops in China to shame.

This tea is a special treat. It starts off sweet and builds from there. The aroma is warm bread, tree moss, wild honey, and mountain meadow grass. It brews thick and rich. The flavor is on the savory side with early notes of smoked green beans. This develops into a citrus vibrancy with a finish of honeydew melon. This tea will brew forever. It is a very satisfying tea, and we hope an intriguing one.

Wood Fired
Hand Rolled
Direct Sun Dried
Stone Compressed
200g Cake
The more you buy, the more you save! We have discounts on 2 cakes and on tongs of 5 cakes.

Still trying out some of my Crimson Lotus tea samples from 2018. There are so many good ones!

95C – 120 ml- 4g , started off with less than 5 sec and worked up
The first 4 steeps were my favourite. There was no bitterness or very little in the early steeps. It was so apricot fruity and juicy. I just loved that. There was also a light honey sweetness that coats the tongue. Also got a bit of mineral taste.
After steep 4 , it became much more mineral, less apricot and honey. Bitterness started creeping in more and I detected a bit of a sour note. It just kept getting more mineral with each successive steep. After that I was getting a bit bored with it. Around steep 8 , it started changing around again and I could pick up more honey again. I never made it much past that. I was too busy to go back to my tea and don’t drink any tea with caffeine late afternoon or evening.

1. discard
2. Smells like a breakfast cereal that I can’t place.
3-7 Has a temper if you oversteep, but smells dynamic. I do not have the time today to pay attention to each change. This sessions’s already been interrupted by 4 phone calls and a vast stream of texts. All I can say is that the mystery cereal is gone and has been replaced a sprightly vegetal thing. Throat feels a bit dry.
8. The energy is like the melodic line of “Once Upon A Dream” from Sleeping Beauty. The visual is princess Aurora waltzing with the birds and squirrel and the bunnies in the forest. https://youtu.be/LCCxnuLlS18?t=6

The harshness of newer sheng will give me a tummy ache if I go past 7 or 8 steeps, so I will stop here.

This is the first tea from Crimson Lotus I had a chance to try, so I was really looking forward to it. It is flavour and aroma focused tea. There is not much in the way of cha qi. Mouthfeel is interesting, but not the most enjoyable.

The dry leaf smell reminded me of sweet butter pastries, but there was also some vegetal aspect most reminiscent of nettle. After the rinse, the aroma became very complex and intriguing, like one would hope from a tea with such a name. It evoked a winter time in a conifer forest. I could also smell some smoke machine, edamame and thyme. The aroma in the empty cup could be best described as a sweet, dry meadow.

I will not go into all the details of the taste, which is fairly complex. I couldn’t, even if I wanted, because at the time of writing this note, I just don’t remember :) However, the evolution of the taste in each sip, especially in the early infusions, is roughly the following. It starts off herbaceous and bitter, gets sour and fruity in the finish and slowly gets sweeter and vegetal in the aftertaste. Overall, it is quite tart for a sheng. In the late steeps, it gets more vegetal generally. Flavours I noted include medicinal ones, alcohol, apricot and lemon skins.

The liquor has medium to light body initially, but around steeps 5-8, it gets considerably thicker. It has a tingling, coating and soft mouthfeel. There is some dryness in the aftertaste, but generally it’s quite smooth.

The taste of this tea (and also the mouthfeel a bit) reminds me of YS He Bian Zhai (a Mengku tea). That one is generally thicker and seems to pack more energy. Introgue on the other hand is probably more complex. Thanks so much for this sample derk, I enjoyed it a lot!

I like where this one’s going already at such a young age. My sample is mostly a whole chunk with layers easy to peel. It’s quite the mix of shapes and colors, from almost black to brown, olive and beige with some beige-grey needles and a few gold ones. Dry leaf smells soft, sweet, vegetal, yeasty. Rinsed leaf aroma is peach, a light smoke and green beans. Rinse color is a light honey and I don’t know if my eyes are playing tricks – a tinge of pink.

Starts off light bodied and mineral, gaining some light honey with some sourness mid-mouth and light bitterness in the back. Fruity apricot/peach aftertaste. As the steeps progress, the honey disappears. The tea becomes more savory and the sourness becomes identifiable as citric in nature. It continues to get more tart and more bitter, leaving my mouth raw. Then, right when I expect a lot of sheng to lose steam, this one really blossoms. I notice a thickening of the liquor, a fullness in my throat, a persistent sweetness in the back, the bitterness and tartness fade, some light cooling and grassiness show up and the minerals return. Apricot and bready aftertastes linger for a while. It takes to over-steeping well in this later stage. Wasn’t keeping track but I think I got between 12 and 16 steeps.

Poking around, I see several different types of leaf, a lot of them whole and robust, some outlined with oxidation, some fat needles and an outlier leaf that’s longer than my middle finger. Quite the blend. Some charred bits in the bottom of the cup. No stomach discomfort at all. Energy in the beginning was kind of sedating, then later I noticed how utterly caffeinated I was.

This sheng fits my profile pretty well – not floral, not too sweet. Considering a cake for the price. I’m curious where this one will go.