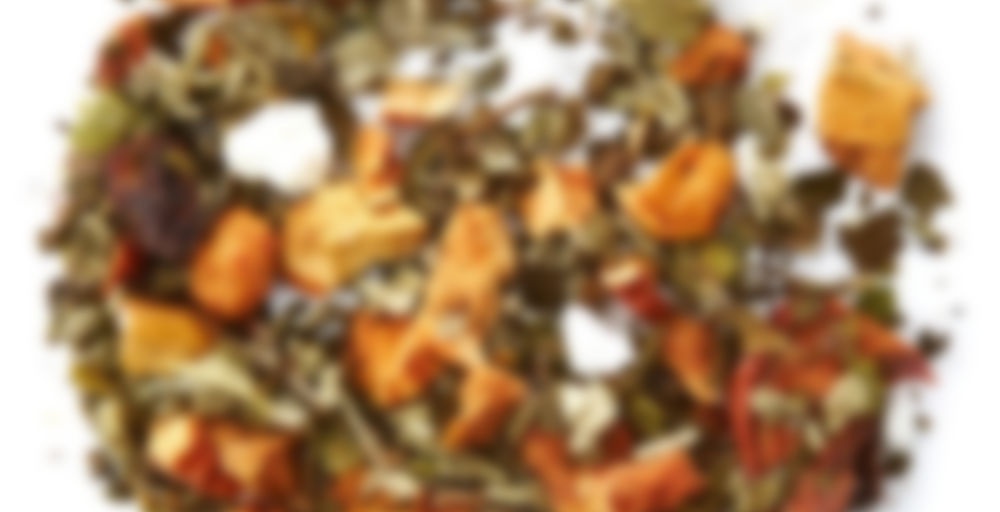 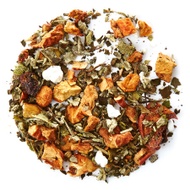 It may be all luscious lemon up front, but this fabulously zesty fruit infusion has a secret – a surprising splash of sage. Fresh, citrusy and delightfully aromatic, it’s a cool and refreshing iced tea you’ll want to serve at every cocktail party. Our favourite part? It’s hangover-free. Doesn’t sophistication taste smashing?

Unsure if I’ve had this previously, but had an unopened 25g bag that I purchased off someone, and opted to make it into iced tea. The ingredients are interesting – because sage is included, which is kind of unique, and sounds like it could be very refreshing (or very strange).

The sage ended up not being overly powerful and mostly overwhelmed by the lemon (which there is plenty of). Probably an okay balance, but I’d have liked a little more sage just to make this more distinct from other lemon teas. However, the sweetness of the blackberry leaves is throwing me off as it’s coming off like artificial sweetener, which I do not like. I’d have preferred to sweeten this myself (if I wanted to).

Overall, if you sweeten your teas, maybe this is a good uncaffeinated lemon choice, but if you don’t, or are particularly averse to the lingering sweetness of artificial sweeteners, probably not so much. Glad to only have this one package.

Throat is still store so I am gargling with salt water, taking EmergenC, and trying to stay hydrated while drinking a lot of honey. That’s where this tea comes in. This tea that I am trying for the first time and really do not like. I tried it first without the honey and mostly got sage, which could be a plus for some but isn’t for me. The honey rounds it out a little and brings out some lemon but tbh, this tastes a little bit like the earthy flavor of weed and I am not into it at all. I don’t know why that’s what is coming across but it is and I don’t like it so the other couple of packages are going into my swap box.

I actually drank this one today too! I always pick this one as a free sample from DT because I love the sweet lemon mixed with the sage. Different tastes, I guess!

Lol to me it was all sorts of weird but that’s why swaps work so well and why I don’t feel terrible when I give people tea I hate.

I feel the same way! There was this one herbal chai that tasted so horrible to me, I called it the fish tea since that’s what it tasted like. Yet my dad always requested the fish tea!

I received this tea as a free sample from an online purchase, though I wish I had chosen another one. I was expecting to taste a lemonade kick, but was met with what tasted like lemon rinds in water. Underwhelming from the first sip to the last.

I remembered really enjoying this tea (I stocked up on quite a bit last year, and just bought another 4oz because it was so cheap). I love the sage, combined with the candy-like lemon. This last cup was pretty bitter though, for some reason. Didn’t finish the cup and dumped it, which was unfortunate, because I was looking forward to the flavor that I remembered.

I love this one! I definitely considered stocking up. I just have soooo much tea.

The too much tea struggle is real!

This tastes like a sour lemon candy. I was pleased to see sage in there, but sad that I didn’t taste much. The smell is probably the best part, and the flavor is pretty pleasant, but it’s not all the way there.

The lemon flavor in this tea is so delicious. They’ve managed to create a blend that has fairly natural lemon flavor. The sage is a bit too strong for me. It makes the tail end of every sip quite savory, which is an odd flavor when someone’s sweetened the tea. I bought about an ounce to sample, but I don’t know that I’ll finish it. Shame. The lemon flavor is really quite nice.

I agree so much with everything in Roswell Strange’s review :). I think that Lemon Smash has a nice smell and taste. It reminds me a lot of lemonheads candies, and tastes like a good lemonade. I expected this to have a huge sage flavor, because it visibly has a lot of sage in it, but I can’t taste the sage at all. It is a sweet, sunny lemon with a hint of sour lemon aftertaste. I just already own so many lemony blends from DavidsTea, and this one doesn’t stand out enough to be a bigger purchase for me.

The dry leaf smells nice and lemony. but it doesn’t taste very good to me. I think it must be the sage ruining this blend for me. Tried it iced.

The closest ice cream shop carrying this flavour is located in a mall near my house, which also happens to have a DAVIDsTEA in it. So I figured I’d get an iced tea too; and while I was there I ran into a coworker from the office as well. After explaining what I was doing, this was her suggestion for something that might “pair well” with ketchup ice cream. The idea was that the sage would work with the savory elements, and the lemon might compliment, yet soften, the tangy elements.

Well – the tea didn’t really go with the ice cream at all but it still tasted quite nice and was really refreshing on the hot summer’s day. I was also going swimming that afternoon, so I had brought the rest of the iced tea with me (in a travel mug) to drink after my swim.

As for the ice cream? I actually LOVED it. It did taste quite a lot like ketchup so it’s an accurate recreation – but it plays really strongly on the tangy elements of ketchup and it was sweeter than normal ketchup as well. I finished the whole cone, and I’d probably order it again.

Hahaha I knew if anyone would try it, it would be you and I had to know if it was good.