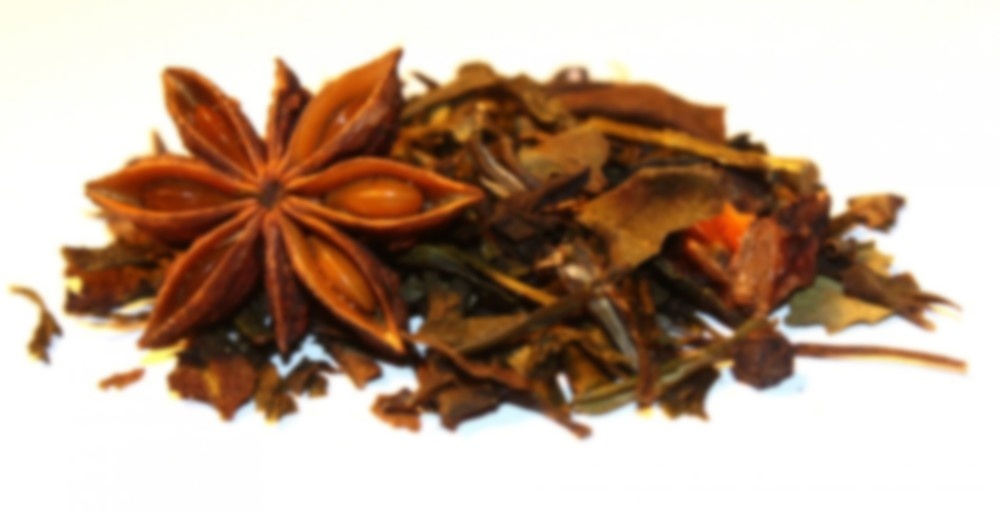 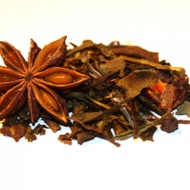 by Della Terra Teas
65
You

Our Raspberry and Ginger White tea blend is certain to be one of your favorites. We chose the best Pai Mu Tan white tea and Lung Ching Chinese green for blending this tea. The ginger root taste married perfectly with the raspberry along side the delicate tastes of the white and green teas. This delicious white and green tea blend is perfect for any time of the year, anywhere. So whether you are sitting down for a tea party with, or just sitting down to enjoy a cup in front of the t.v. you are sure to love this tea!

I didn’t have a big piece of star anise in the cup this time, which greatly improved the flavour, IMO. I taste ginger and a candy sort of raspberry… it’s actually fairly pleasant! I don’t think I’d feel the need to get any more of this, but without icky licoricey flavours, I’m quite happy with it.

I’m wary of any tea that has the word melange in it. We have a bad history lol

Pretty much took a sip of this, made a face, took another sip and then poured the rest down the drain. It was like a mix of licorice and ginger…which wouldn’t be too bad, but it wasn’t the delicious kind of licorice. Not to mention that i pulled the star anise out of the brew basket before brewing it. so yeaaah. no. thankfully, sipdown!

Sounds like such an odd combo! Too bad, because I like star anise but am iffy about ginger.

Breaking into my try-me pack of this, which reminds me, I need to place an order at Della Terra sometime soon! Need more Lemon Chiffon :) but onto this tea. The dry smell is VERY raspberry, I can’t really smell anything but raspberry, quite a sweet, fruity smell. Mm, I haven’t had raspberries in ages, let alone raspberry tea!

As it steeps, the raspberry smell is mellowed, and I get maybe a hint of the ginger. I steeped for roughly 2 mins. The liquor is a nice golden yellow color. As for taste, this tea is super mild to me! Maybe I was a bit light on the leaf, or I got a bit less of the raspberry bits and more of the tea part, but it’s a very mellow, lightly raspberry flavored tea. The white and green tea blend very nicely to not be overpowering though, and the raspberry is definitely there. As it cools, I get a bit more ginger maybe? But mostly raspberry, not too tart though, which is nice! I can, however, see the likeness to the cough drops, it’s definitely a sweeter raspberry taste than sour. I can’t find the jasmine anywhere, maybe it’s just adding to the lightness? Oh, and I think I can feel a bit of ginger on my throat afterwards :), definitely feel a bit of its warming!

Overall, a pretty good cup. I would like a bit more ginger bite to it, might try a bit different steeping next time, to try to coax that out. Maybe a bit stronger raspberry taste too, I don’t know though, it’s pretty refreshing and light though. I could see myself drinking this more in the summer, hmm I wonder how it would taste iced too? I definitely won’t have trouble finishing my try me of this!

Hmm, I was really excited to try this one. It SOUNDS like it would be something totally up my alley. I LOVE raspberry (I just ate a raspberry chocolate Chobani bite for breakfast with this tea.) AND ginger. There was a big fat tasty looking green cardamom pod in with the dry leaf too (YUM! I love cardamom) And the dry leaf smells really good. However, steeped up, it is somewhat artificial tasting. It isn’t so terrible that I am tempted to dump it out, BUT I’m glad it was a swap sample and not a purchase.

I have yet to try it….now im hesitant:/

Awww, I drank it before you? We do have different tastes sometimes!

true, but you usually do well with the gingers and peppercorns and what not. Ill have to sit down tomorrow and this weekend and sip a LOT!

I wasn’t gingery enough for me! I wanted MORE!

HA HA then maybe it has a chance with me:)

I don’t want to be the first to write a tasting note for this one… especially if I say it reminds me of raspberry cough drops.. or what those might actually taste like if I ever had raspberry cough drops. It must be the ginger, which I’m not normally a fan of. I might not like cough drops, but they always remind me of my grandpa for some reason, so they can’t be too bad. The steep color is a pale yellow. I’m also not getting much jasmine here, but I’m starting to think jasmine is very elusive and sensitive to temperature. I’m not sure why anise is in the picture for the tea, since that isn’t listed in the ingredients. The white/green tea combo tastes very fresh. The white tea isn’t drying my mouth at all, which it sometimes likes to do (when I don’t like it to). This isn’t one of my favorites from Della Terra but I have MANY favorites from Della Terra. But give this one a try for yourself! It may be it just isn’t for me, or I didn’t steep it right.

Overall not bad. The raspberry is quite light and fairly artificial. Almost like raspberry cough drops as others have said. Dry it smells amazing and complex. Steeped it is uninteresting.

This tea is nice and mellow. Green tea and white tea blend together quite well. I am a bit disappointed in the raspberry, tastes artificial. I get a tiny hint of ginger, wish it was a bit stronger though. This tea is a bit more sweet then I would have liked, I’m guessing because of the raspberry flavouring maybe. I don’t really taste any jasmine. Overall it is good but I probably won’t be repurchasing.

Eh. I like the raspberry, it’s good (also, I don’t think the picture used for this tea is the right one). But the ginger is kinda off-putting. I’m not a fan of ginger, though. It’s a good coldbrew, very refreshing, but I’ll take Razzmintazz from Tealish any day