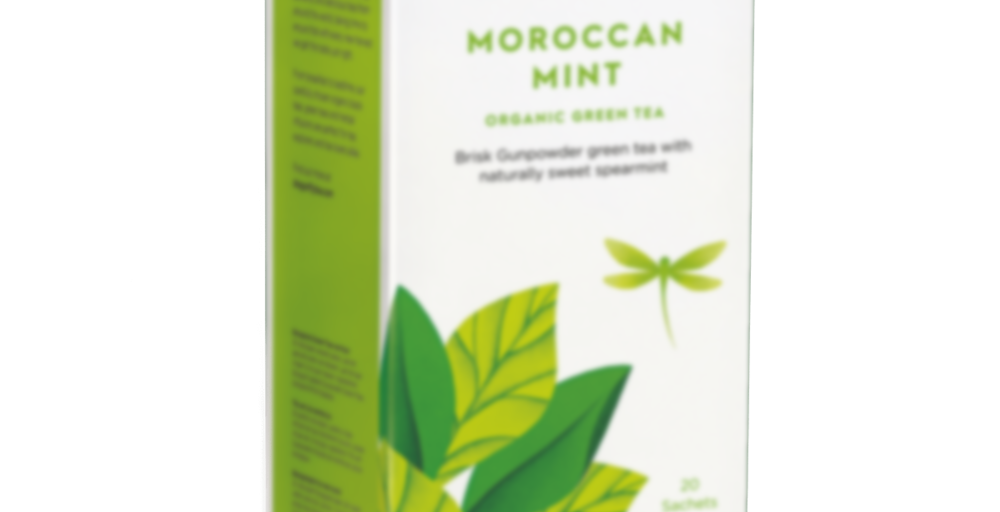 by Dragonfly Tea
75
You

An authentic blend of aromatic spearmint leaves and superior gunpowder green tea, this wonderfully reviving organic green tea is inspired by Morocco’s rich tea-drinking tradition. The tea-maker’s craft lies in perfectly balancing the natural sweetness of the spearmint with the brisk, slightly smokey notes of the gunpowder tea.

In Morocco, where it is served throughout the day, both between and during meals, every cup is said to be a refreshing surprise. The tea is typically poured into small glasses from great height, thereby adding a certain theatre to the occasion and gently aerating the honey coloured liquor. The name ‘gunpowder’ comes from the appearance of the grey-green tea leaves, which are traditionally rolled by hand into tiny pellets that resemble gunpowder.

Yesterday I swapped two bottles of wine (I was picking some better ones) for HUGE LOAD OF TEA BAGS for my collection. It is two big paper bags and one, smaller (but still full and bigger) plastic one. And lots of those teas are still full, although way old. I think that foil wrapped teas will be okay at least, but paper ones? Not really sure.

There is no way to put all the teas in my cupboard (not even a virtual one), so I will just pick some tea as this morning when I picked this one as it was first green tea I saw. And my What-cha order is on the way, as well soon Bird and Blend. Oh dear, so much tea!

I have to say, that those teas were well stored, as there is no dust on them, so I hope the majority will be drinkable. I promised to share with other collectors, but certainly I would not share everything, and rest will be for exchange I think. /End of diary entry

The tea smelled faint of green tea, but spearmint was there although not very strong too. But when it hit the water the aromas started to rise. They suggest rapid brewing (one to two minues) so I will do my best probably. The tea looks quite finelly chopped, and quite big load of peppermint is there as well.

After this short steeping period I tossed the bag out, and the brew have following: nice yellow-green colour, not super clear, but not really cloudy too. Stronger spearmint scent, bit honey-like too. They claim it is gunpowder green tea, so… maybe that is in as well.

In taste it is really strongly spearmint tea, while green base is in background. Overall, it is mild, yet full-bodied tea. Although old, still tasty!

Now these are exciting times! Even if old. Exploration!

I hope the bags contain some good ones for you!

This was surprisingly good! I don’t know why I always feel that a bagged tea will be disappointing, because I own so many decent (and quite a few fantastic) bagged teas. This, I’d quite possibly put in the almost-fantastic category.

The gunpowder base was perfectly balanced with the spearmint, so that just as I worried I’d over-steeped it, there came a refreshing burst of mint that tingled on my tongue. Every sip was the same. I was sad when I’d finished this, to be honest. It was a light, refreshingly minty and rejuvinating tea and a pleasure to drink.

I’ve not had a moroccan mint in the longest time, and I’m only sad that I don’t have copious amounts of sugar and a pretty tea glass here with me at work today. Still, this hot weather seems particularly suited to a moroccan mint, so I’m going to go ahead even if I can’t do it as much justice as I’d like.

For a bagged tea, this is good. The gunpowder base is just on the right side of bitter, and the mint comes in just before you’d expect the astringency to hit. In the way of mint, it adds a cooling, refreshing edge and is nicely prominent without being overpowering. I added a little bit of crystal sugar, and that helps to brighten and sweeten things a little. It could hardly be considered the best tea out there, or even the best moroccan mint, but it’s hitting the spot today and that’s all that really matters at the moment.

I’d pick up a box of these if I ever saw them around. They’re great for easy-drinking on hot days!