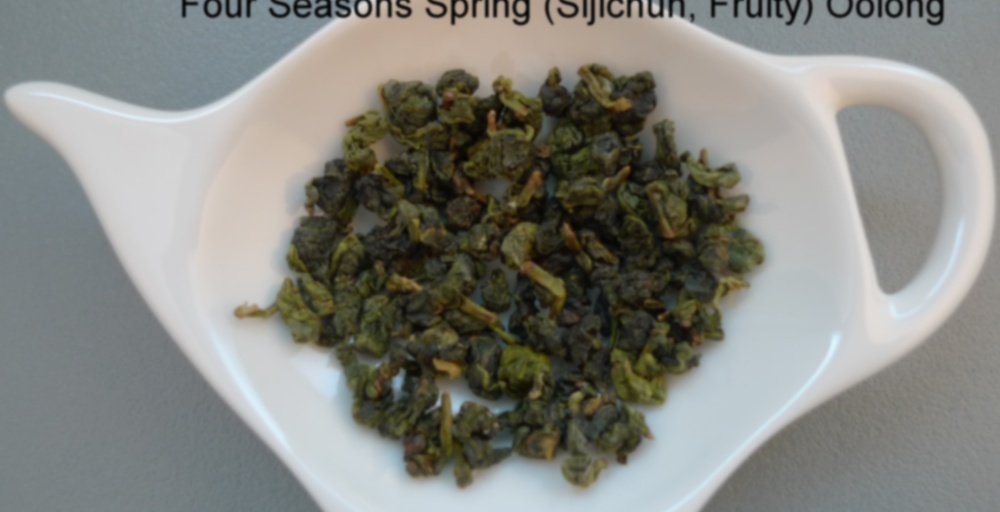 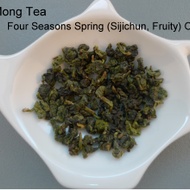 In addition to stringent management of planting, Sijichun oolong tea was handcrafted to popular oolong tea with two flavors, one is light with floral aroma, while the other one roasted with a fruity hint. This Four Seasons Spring oolong was strictly selected as a higher grade oolong tea, and crafted to nice refreshing /fruity flavors to this tea, with floral notes and hints of a fruity flavor possess particularly pure and strong fresh flower fragrance plus smooth taste, which you tea lovers won’t miss it out.

Ooh! This one’s really good! It clearly tastes like an oolong, and I definitely taste a fruitiness moreso than floral taste. This is really, really delicious! I’m actually rather surprised! The aroma is also fruity rather than floral. I’m really pleasantly blown away by this one! It’s also deliciously buttery and good. Man… I’m so impressed! I would buy this again in a heartbeat :) I used about 3g of leaf (maybe 4 by accident?) in about 8 oz., maybe less, water, at 94C. Yum! Going to go do another couple infusions now. Thanks to Fong Mong Tea for this sample!

ETA: Second infusion (94C/3 min I think, or possibly 4) is not nearly as tasty :( Smells like an oolong, tastes like a weak oolong that has somehow been oversteeped. I’m a bit disappointed. The first infusion was spectacular. Downgrading the rating a bit, because I expect at least 3 good infusions from an oolong, otherwise it’s not worth my while as they are typically expensive. It’s possible that I used too much water, and did use 4 min which was too much, but I’m not sure. I’ll try a third with quite a bit less water.

ETA again: Sadly, disappointed with the third infusion as well. There’s a bit of oolonginess, but it’s just not up to par with other oolongs I’ve had. I’m so disappointed because that first infusion was worthy of a high 90 rating.

ohh. now I know who you are, I was wondering!

Yeeeah. I had a little disclaimer up for a while but have since deleted it. I’d direct you to my recent post on ’Mom’s Apple Pie’ by DT to read more :P

Did you realize it was me by the ETA?? shame

no, I think earlier you changed your name and the photo and I couldn’t figure out who it was. Now the photo is back.

Oh, that’s just a cache thing then. I’ve changed both permanently :P (Although I’m not fond of this alias, I just couldn’t think of anything better!)

Scott- I told you that, you need more tea, clearly!

Hahahahahahaha :P I really hate that I did things so suddenly; I just panicked. Had I had a bit more time, I would have switched things one at a time so people could follow.

Ya’ll have got to stop smokin the tea!

Amy, I posted the comment before you told me. :)) Yes I clearly do need more tea!! :DD

Made the last 3 grams of this western style with the below prep details.

I think overall I’m a fan of the shorter, multiple steeps. Green oolongs in general tend to be too vegetal for me to enjoy when I brew them longer. Maybe I’m brewing at incorrect water temperatures or too long. I think I need to play around with oolongs a lot more than I do.

I did enjoy this more the first time I brewed it at the shorter steeping times.

Steeped for 6 minutes at 85 as suggested, but tastes a bit “overcooked”. Not astringent, or bitter, just overdone. Liquor is a light sunflower yellow. Has a strong oolong taste and smell, but also reminds me of a dragonwell – buttery, reminiscent of veggie broth and a titch earthy.

Definitely not what I was excepting at all. I don’t detect any floral or fruity notes. I was also surprised to see some twigs/sticks in the tea, which I haven’t encountered before – unsure if they’re supposed to be there or not, but would guess not.

In subsequent steepings I lowered the water temperature to 80, which I found much more favorable, but only got 3 steeps total out of the leaves.

This is tied with the Pou Chong for favorite sample from Fong Mong Tea!. Thank you, Fong Mong!

I made this gong fu style this morning. A quick rinse, maybe five seconds, released buttery aromas, and the scent of sweet green veggies.

I kept the steeps fairly short and made five so far, tasting a sip in my tiny cup as I first poured it, then adding the remaining tea in the pitcher to my tetsubin to meld each steep together so that I will have an impression of the flavor western style as well.

The liquor is a soft golden color. The aroma is buttery sweet greens, and there is a slight astringency, not unpleasant and quite possibly due to my steeping. This is excellent and very enjoyable.

There is a sweet fruit flavor that rises in the throat after drinking this. Delicious!

Thank you again for the opportunity to sample your tea, Fong Mong Teas!

Trying another gongfu session this afternoon. This is 6g (exact measurement) of tea for my 6oz pot. This tea was a sample provided by Fong Mong for review (that I’ve been bad about getting around to tasting), so thanks!

Perhaps it is just the power of suggestion from the name but the dry leaf on this tea does smell fruity to me. This time I steeped this oolong at slightly under the boil, for 45 seconds as recommended by Fong Mong, after a rinse. The tea smells very floral and a bit fruity, with a bit of vegetables underneath, but not leafy vegetables like I often get with oolongs. More cooked zucchini or something. The flavor is mild at first sip but it quickly blossoms in the mouth, sweet and candy-ish. Still with a bit of those vegetables, as if it was candied zucchini (which I saw some chefs do on Chopped recently, so maybe that’s where I’m getting the idea from). I like it, it’s pretty different from most other oolongs I’ve tried.

Second steep is, once again for me, kind of lackluster. I steeped it an additional 15 seconds as instructed by Fong Mong, but it has now lost much of the sweetness and more of those leafy vegetal notes are coming out. I don’t blame the tea because, as I’ve said, this is a problem that has plagued me for a while. I tried to do an extra long steep, almost western style, but it’s always as if I steep out all the good flavors early on.

I am rating this one based on the first steep, which was very tasty and unique.

I didn’t really get the fruity connection but that’s ok with me because I did get all of the smooth oolong goodness and it was lovely! This is a great, true Oolong to have on hand any time – any season! Clean, fresh, pure! A delight!

These are some of the smallest Oolong pellets that I’ve ever seen, they look much more like gunpowder than a typical Oolong. The aroma is more floral than fruity which surprised me a little bit given the name of the tea.

A nice apple-like flavor to this, with floral notes and hints of a grassy like flavor. A really good Four Seasons Oolong. Please see my review (link above) for details on each cup/infusion.

Thanks to Fong Mong Tea for such a generous sample!

Second steep(~15s): Liquor’s a bit darker, a very pale gold. Light scent of toasted walnuts, maybe a bit of rice. Not like a genmaicha, but sort of as an afterthought. Almost a sort of potato-y sweetness.

Third steep (~25s): Still a very pale gold. Similar to the previous steep. Maybe the sweetness is sort of a lychee flavor?

Fourth steep: (~40s): Very pale, light flavor. Reminds me of a Dragonwell green – light, buttery, smooth. I’m thinking that I should have either used more leaf or started steeping longer. It’s good, but a bit tame.

Thank you to Fong Mong for the sample.

I’m getting a little fruity notes from this one, but not too much. It definitely has that unmistakable oolong taste. It’s a little bit creamy, too. I’m getting a slight bitterness, which makes me wonder if I steeped it for too long. I did the recommended 6 minutes, but that seems a little high.

I think my second infusion, 4 min of steeping, was a touch bitter too. I really enjoyed my first infusion that I did for 3 min. Amazing!

Thanks for Fong Mong Tea for this sample, I have been delayed in reviewing them because I want to ensure that I had a couple hours over which to do multiple steeps.
This tea came in lovely little balls with not too much of a fragrance.
1st steep: colour is a pale green, deliciously sweet smell. The main flavour is a sweet citrus-y flavour- almost lemonade-esque. Not too much in terms of vegetal flavours yet.
2nd steep: More earthy notes came through, less sweet but the citrus is still there
3rd steep: All sweetness is gone, earthy citrus-y taste, pleasant enough but I like my oolongs sweet.

Overall, this is a good oolong, but not among my favourites. It wasn’t sweet enough for my liking, but it was still a nice cup.