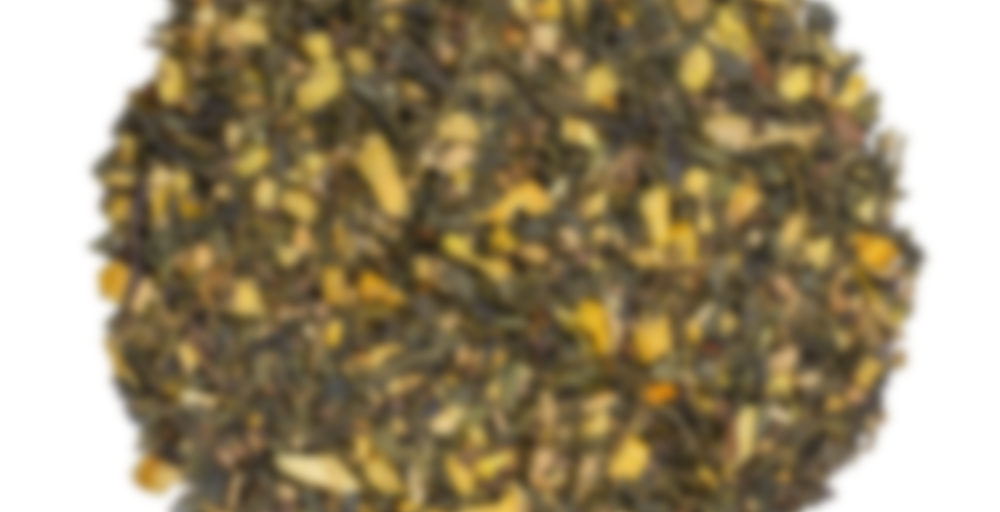 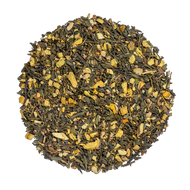 with 33 Ratings Rate this tea Rate This Tea

Prepare yourself to face the chill of winter with Imperial Label. This green tea, a subtle blend of orange, cinnamon and licorice, is the perfect combination for any gourmet in search of something new. It also features notes of vanilla for an extra hint of sweetness.

I’ve been working on some of my flavored greens today, this and the green chai by Simpson and Vail. Of the two, the green chai is definitely better. The Imperial Label is such a strange mix of licorice, cinnamon and orange. It does leave a medicinal taste in your mouth. This is old enough (2 yrs, I think) that I might just pitch it after the winter is over. I remember last year it was good when i had a sore throat, due to the licorice.

Would never buy this again, however….

I agree, this one is so bizarre…

Maybe I like it when I’m sick because I can’t actually taste it? :)

Well it is extremely heavy on the licorice, so I suppose it makes sense for sick time. :P

It sounds weird, but… interesting. I wonder how they come up with these flavor combos!

I kind of think of this as a detox tea. As such I don’t mind it. I keep my steeps to about 1 minute though.

I got this sample tin out of a basket last time I was in Fru P. I hadn’t seen her having Kusmi samples before, so I had a look through. This was the only one that I hadn’t tried before or didn’t know would be an instant dislike, so I let the promise of vanilla in the ingredients list seduce me.

This smells like soap at first. Then, when the assault on my nostrils dies down a bit, I can recognise it as largely cinnamon. Charm the Cat seems to find it unbelievably stinky. This stuff has just cost me a lap-Charm, and that’s a pretty rare beast to begin with. One whiff, and she left.

I can’t decide about the flavour. It’s sort of hovering smack dab in the middle between ‘eurg soap!’ and ‘pleasant actually.’ It’s mostly cinnamon, but fairly smooth. I can sort of pick up vanilla and citrus, but not in the way that I can taste them as such. More in the way that it feels like this is what is tempering the cinnamon. The licorice root shows up as a sweet afterthought on the swallow, but that’s all.

I really don’t know about this stuff. I’m going to withhold rating for now because I feel very ambivalent about it. I honestly can’t tell you if I like it or not.

it is the only Kusmi I wanted to try. I’m not a fan of the brand but this one was appealing… not sure I am so hurry to have it now :)

Does she have Fauchon amidst her tea samples by any chance? :)

This is a great blend to drink when you’re sick with a sore throat :)

Ysaurella, I’ve had some fairly good experiences with Kusmi. I love their caramel and the smoky earl grey. :)

Courtney, I doubt it. I’d have to study the shelves closer, but I doubt it. Kusmi is pretty much the only one of the French brands that are available here. Anna sent me a couple of Fauchon samples recently though.

I abandoned this mug after making it and learned that this tea is actually better cold than hot. The citrus flavor really comes out and makes for a nice, refreshing drink. Good for summer, but also a nice accompaniment to a Mediterranean meal any time of year.

Thanks for the taste, oOTeaOo!

Love it. While I can’t taste much Sencha (or tea at all, really) in it, it definitely has a strong flavour that borders on sweet without crossing the dessert line. Smells as good as it tastes. I’ll definitely purchase this again.

The first thing you’ll probably notice about the tea is the smell. It’s pretty much just citrus when dry, but when brewed and hot, it smells like some kind of beautiful cake. I couldn’t stop smelling it. It smells like cinnamon and orange and something vanilla-like. It’s such a good smell! Unfortunately, the flavour isn’t really a match for it. I’m sad about that, because if it were, I could drink it all day.

For me, the tea required more steeping than recommended. This may have been problematic: some reviews elsewhere said it needed no sweetening because of the licorice, but I beg to differ— mine was bitter and the flavour was just kind of dull with no sweetener, and the spices weren’t being brought out. When sweetened, the cinnamon and liquorice spice element can’t be ignored whereas before it was kind of just a nondescript spicy, herbal “vibe.” I think mostly this tea is yet another reflection of the fact that orange and spice consistently mix badly in teas. That’s unexpected (they can mix well in baking and perfumery, for instance), but this is not the first time I’ve felt this way. On that note, maybe part of my negative impression is based on the fact that it reminds me of Teekanne’s Oriental Spice Tea, which was literally the worst tea I’ve ever had in my life. Fortunately, this tea was nowhere near the trainwreck that was, but the base flavours of orange, cinnamon, and vanilla are common to the two. I’m going to try to stop thinking about that fact now, because the memory of the Teekanne tea seriously haunts me and it’s making me disgusted.

This tea has some stellar reviews around the Net, but I found it just okay. It wasn’t unpleasant or undrinkable, but the large amounts of liquorice and cinnamon gave it kind of a herbal, bitter, spicy, medicinal taste. At times some of those characteristics can be positive, but when you combine them all, as has been done here, I don’t think it’s a recipe for success. One strange thing was that, and I don’t know if it was just the combination of the spices or something, I could’ve sworn something tasted a bit cardamom-y. Normally, that would appeal to me, but in this kind of brew, it wasn’t a selling point. Those strong, medicinal-smelling spices like cardamom or liquorice with chai spices and soy milk? Sign me up. Those spices in a thinner, bitter brew? Hmmm, I’ll pass.

If I had some of this tea given to me (or got another couple of bags of it in a Kusmi selection pack), I’d drink it (because it’s not too bad and I love tea), but I wouldn’t buy a tin of it based on what I’ve tasted (based on what I’ve smelled? Well….) It wasn’t wholly unappealing, so if strong spices with some orange sound good to you, you should still give it a try.

Yet. Another. Green. Tea.

I like the combination of orange and cinnamon – I actually find it really wintery and festive, especially with the addition of clove. So I was excited for this despite the tea base. It’s got a pretty bright and sweet orange flavour that’s actually really similar to the orange flavour from yesterday’s Kusmi selection “Feel Zen” and while I do like that flavour I feel like… it’s not enough spice?

I just wanted more punch from both the cinnamon and clove, but that’s maybe because I’m so used to drinking DT’s The Spice Is Right/Orange Spice which is heavily spiced. Compared to that tea, this was just weak and not as satisfying. I don’t actually think it’s a bad tea though. It’s just that it wasn’t what I was expecting or wanting.

This is nice! It has a really authentic spiced orange flavor. I don’t really taste the green base, but that’s okay. It’s a tasty, well-balanced warm tea. I didn’t expect this to stand out over many similar teas with this flavor profile, but it’s very well executed.

It took me some time realising that I actually reallly like this tea. In fact, it is probably one of my favourite tea’s in my stash since it has a very layered flavour. The smell is delicious as well. I particularly don’t really taste liquorice but more of an overall spice blend. Also like the sencha tea that is the base of the blend. I am on my second tin.

I get the soapy part people are talking about. According to the packaging it should be brewed at 80. However, the hotter the water is, the less soapy flavour comes out.