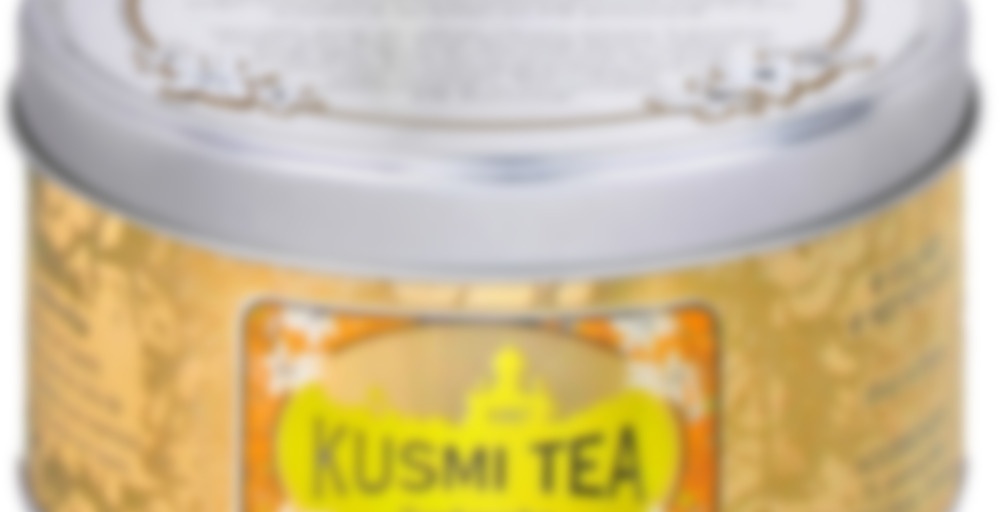 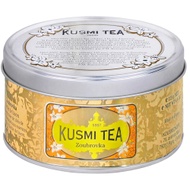 I knew there was something familiar in the name Zoubrovka. Turns out there’s a Polish vodka infused with the same buffalo grass of the same name. Wasn’t aware I was purchasing a Polish tea blend, but I’m all the more pleased with the discovery (being part Polish.)

So what does a black tea infused with buffalo grass taste like? I honestly found it to be similar to the sakura teas I’ve tried – floral and cherry notes over a smooth black tea. I don’t drink alcohol, but if the buffalo grass flavors the famous vodka brand as well as it does, I understand the appeal!

This is the second Kusmi I’ve tried and they’re 2 for 2. Strong without being astringent, flavoring that doesn’t knock you over in lieu of the tea itself. The Zoubrovka blend doesn’t hint at it’s floral/cherry notes in the dry leaf or aroma, but it’s there in the sip. A delicious daytime sipper for the office.

Blow me away why doncha? Herbal, sweet…Kusmi is right, this does taste like a liqueur. Delicious. Simply delicious.

There is a liquor connection. There’s a vodka infused with buffalo grass called Żubrówka. (Note the similarity in name.)

The fragrant bison grass (“hierochloe odorata”) makes this tea unique. Not my taste but still above average tea quality and worth trying for the out of the ordinary experience.

I remember once drinking a vodka from Ukraine that was flavored with a combination of buffalo grass and St. John’s wort. I can’t remember what it was called, but I seem to recall it having a label with blue and silver lettering and an illustration of a dancing woman in peasant attire. I also remember buying it because it was dirt cheap-I was in graduate school and working an unpaid internship-and it was all I could afford to get drunk on at the time. Oddly enough, it was very good, especially for the price. Unfortunately, I have not been able to find it since.

Now that I am no longer drinking, I wanted something that reminded me of the freedom of my mid-twenties. Since a search for an obscure vodka was not in order, I settled on a tin of this black tea blend from Kusmi. The label clearly stated that this is a blend of Chinese black teas flavored with the essence of buffalo grass. I’m not entirely certain which kinds of black tea are used, but judging from the shape and color of the dry leaves, I am willing to bet that Keemun may be one of them.

I prepared this tea using a one step Western infusion. I steeped 1 teaspoon of loose tea leaves in 8 ounces of 212 F water for 4 minutes. Obviously, I did not attempt additional infusions. I should also note that Kusmi recommends a much lower brewing temperature for this tea. I used 212 F because the label gave the recommended temperature range in degrees Celsius and I did not feel like doing the conversion at the time. After finishing two cups, however, I got curious and used my phone to convert the temperature range from Celsius to Fahrenheit. I then realized that the water I had used was much hotter than the merchant recommends. Fortunately, I found this blend to be very forgiving. The next time I fix a cup of this tea, I will try a temperature in the merchant’s recommended range to see how it compares to my initial preparation documented here.

Prior to infusion, I noted that the dry leaves gave off the unmistakable scent of buffalo grass. The smell immediately transported me back to my mid-twenties binge drinking days, only without the threats of impending nausea, inebriated (poor) decision making, and mule kick hangovers. After infusion, the dark amber tea liquor gave off lovely aromas of cream, toast, malt, and buffalo grass with a hint of spice. Do Kusmi teas ever smell bad? In the mouth, the buffalo grass is placed squarely front and center, lingering throughout from the entry to the finish. I noted pleasant flavors of toast, cocoa, malt, cream, smoke, and spices (coriander, cardamom, cinnamon, and nutmeg) balancing the buffalo grass. It was simpler than expected, and the blend was decidedly slight in the mouth, but it was nice. The shift from creamy and toasty to smoky and spicy beneath the prevalent note of buffalo grass was unique and appealing.

Though I tend to be something of a Kusmi Tea fanboy, I am also willing to admit that the previous reviewer who opined that the smell of their teas can be nicer and more unique than the taste may have a point with regard to a number of Kusmi products. I, however, do not necessarily agree with that assertion being applied to this particular blend. I found it to be flavorful, unique, approachable, and above all, extremely easy to drink. I would have no problem recommending it to open-minded tea drinkers looking for something a little out of the ordinary.

I still haven’t finished the tin of this I bought five years ago. It’s okay, but it’s kind of boring, and like many of Kusmi’s teas, I think its scent was writing checks that its taste couldn’t cash. Every time I make this, I’m reminded of the vodka and then I’m disappointed that I’m drinking tea and not vodka. It has a subtle smokiness to it, that is nice and if I were somehow seperated from my giant cannister of lapsang, I would brew this, I guess. I see that some folks like this iced, so maybe I’ll try that, sometime.

Iced, this is the first thing I ingest on a summer morning. The lightly grassy flavor interests my palate without overwhelming it. An invitation to enjoy life.