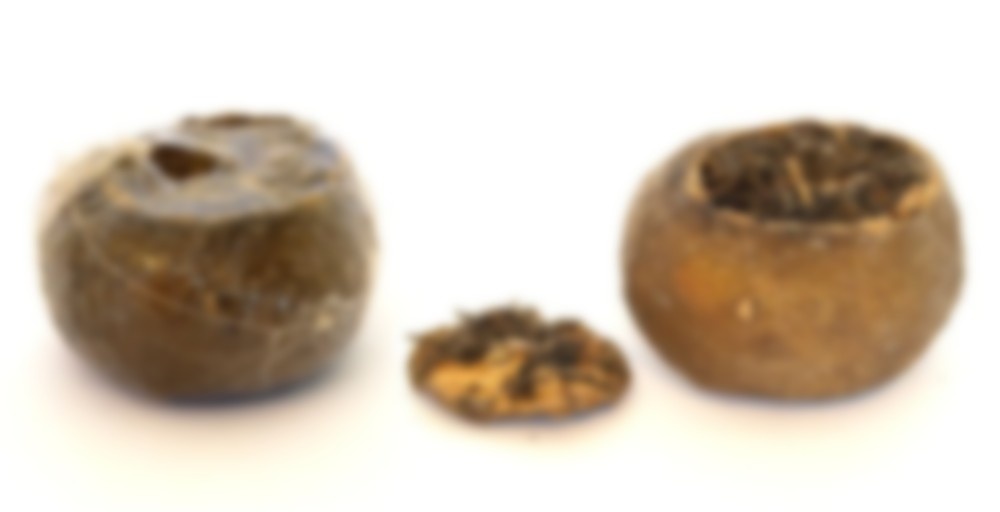 by New Mexico Tea Company
76
You

Looking for something to wow even the most knowledgeable tea connoisseur? Look no further. Available for the first time in the West, mandarin packed pu-erh is without question one of China’s more unique tea offerings. What’s even better than the way this tea looks, is how it tastes.

China’s tea history is so storied and vast that no one can say with certainty who first packed raw pu-erh leaf into the baked peel of a mandarin. Pu-erh was traditionally grown on 6 mountains known as the Six Famous Tea Mountains in Fujian province: Mount Geding, Leather Strap Mountain, Mount Mansa, Seed Sowing Bag Mountain, Mount Mangzhi, Copper Cauldron Mountain, Mount Manzhuan, Iron Brick Mountain, Mount Yibang, Wooden Clapper Mountain and Mount Youle, Copper Gong Mountain. In the early days of production, tea growers on these mountains devised unique and interesting ways to pack and press their teas. Pu-erh subsequently came to be pressed into the form of mushrooms, coins and bricks, to name but a few. At some point, an ancient producer, seeking a way to differentiate his product in the marketplace devised a method of hollowing out mandarin oranges, packing his raw leaf inside and aging them in cool mountain caves.

The process used to make mandarin packed pu-erh has remained largely unchanged since early times. To begin, the pu-erh is processed according to traditional methods. Next, fresh mandarin oranges are hollowed out and packed with tea by hand and flash dried at a high heat. (This sterilizes the orange peel and kills off any microorganisms that may be present.)

As mentioned above, the packed oranges are then stored in a cool dry location, allowing the tea to ferment and dry within the orange. As the tea ages, the peel and leaf both turn a deep brown. Now, if you’re guessing that fermenting tea inside an orange is going to infuse the leaf with a delicate orange scent and flavor, you’d be right. In fact, while most pu-erh teas are characterized by musty, earthy tones, mandarin packed pu-erh is highlighted by exceptionally light notes of citrus. The infusion is similarly clear tending golden yellow, in marked contrast to the darker infusion of traditional pu-erh. Xantou Mandarin Green Pu-erh is a tea that is certain to get your customers talking!

This is an incredibly good tea, though I’m not really sure why. I steeped it for 4 minutes, per NMTeaCo’s website. The initial smell I got was classic barber shop, some kind of hard candy, and a little bit of old man cologne smell to it. Very strange.

Upon tasting it I found a pleasant light flavor, with hints of mandarin orange in there. It isn’t a dominating taste of orange, which is good, considering that it was encased in orange peel. Still tastes a little old man cologne-ish, but I guess that’s the aged pu erh at work, right? There’s a very light yellow tint to it as well, a bit different from most greens I have brewed in the past.

Overall I really do enjoy the subtle-ness of this tea, even if it has barber shop/cologney overtones to it. It has some kind of charm to it, that inspires me to drink it; weird. Definitely a tea to try, I’m going to give this guy a 90 Rating on the TeaCast scale. Just excellent!

Very good.. Great Pu-erh flavor with an infusion of orange from being fermented inside. Smells kind of like tang before it’s steeped, but the brewed flavor is very good.